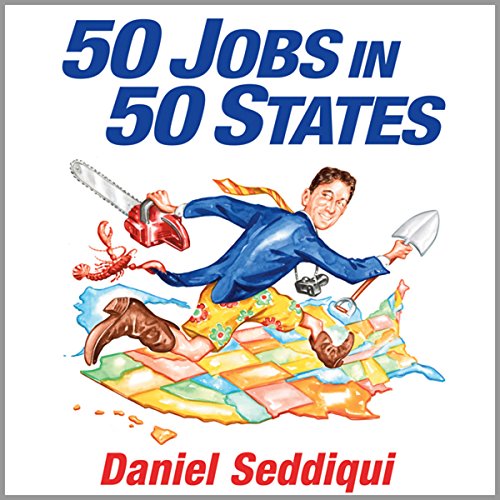 Like lots of college grads, Daniel Seddiqui was having a hard time finding a job. But despite more than 40 rejections, he knew opportunities had to exist. So he set out on an extraordinary quest: 50 jobs in 50 states in 50 weeks. And not just any jobs; he chose professions that reflected the culture and economy of each state. Working as everything from a cheesemaker in Wisconsin, a border patrol agent in Arizona, and a meatpacker in Kansas to a lobsterman in Maine, a surfing instructor in Hawaii, and a football coach in Alabama, Daniel chronicles how he adapted to wildly differing people, cultures, and environments.

From one week to the next he had no idea exactly what his duties would be, where he'd be sleeping, what he'd be eating, or how he'd be received. He became a roving news item, appearing on CNN, Fox News, World News Tonight, MSNBC, and the Today show, which was good preparation for his stint as a television weatherman.

Tackling challenge after challenge - overcoming anxiety about working four miles underground in a West Virginia coal mine, learning to walk on six-foot stilts (in a full Egyptian costume) at a Florida amusement park, racing the clock as a pit-crew member at an Indiana racetrack - Daniel completed his journey a changed man. In this book he shares stories about the people he met, reveals the lessons he learned, and explains the five principles that kept him going.

"[T]he memorable anecdotes contribute to an authentic sense of each job and provide an original perspective on the nation's careers…. informative and inspiring." (Library Journal)

What listeners say about 50 Jobs in 50 States

Whiner can't grow up so he writes a book instead

The first two hours are whining about what a great chance he had but things just kept beating him down. Gee, he WANTS to succeed but life is just so tough on him. Mommy and Daddy don't love him. Wah wah wah. The self-pitying got SO annoying I had to turn it off.

Would you ever listen to anything by Daniel Seddiqui again?

Would you listen to another book narrated by L. J. Ganser?

Sure, I'd try. Performance was fine but the material was so annoying I began associating Ganser's voice with the dislike I had for the book.

If you could play editor, what scene or scenes would you have cut from 50 Jobs in 50 States?

The entire book is structured so that you can't really cut just one scene. EVERY section seems to start with the author gearing up to fight the dragons, then he's rejected and falls into another sad, sorry condition and has to bemoan his life. I was really looking forward to a

This is some of the worst writing I've ever read. If I were slogging my way through the paper version, it would be completely unreadable. As an audiobook, I managed to clear five hours. It's too painful to continue. It's like a twelve year old's travel journal. It's truly horrible. Just the laziest, cliche-littered story telling imaginable, Seddiqui would do well to read Bill Bryson, assuming that's who he's attempting to imitate. I can't believe I paid money for this. I think it was $5.95 and I've never had so much buyer's remorse about anything.

What could Daniel Seddiqui have done to make this a more enjoyable book for you?

He could become a writer. The writing itself is unspeakably bad.

The performance was quite good, but no performance in narration can fix the underlying text. If the best singer in the world covers the worst song ever written, I'm not going to suddenly think it's good music.

What character would you cut from 50 Jobs in 50 States?

a younger audience, perhaps someone looking to travel US or someone learning English

Has 50 Jobs in 50 States turned you off from other books in this genre?

What didn’t you like about L. J. Ganser’s performance?

the performance was ok, not much more you could have done with the material available

A non-fiction classic in the making.

This book reminded me of the apocryphal Native American saying, if you want to understand someone, you must walk a mile in their moccasins... Recommended reading.

Not what I'd hoped for

I guess I expected a more mature effort. 50 jobs in 50 states is fine but a time limit of 50 weeks? not so much. He looked at the jobs as real but if you are only there for one week or in some cases less than one week, does that qualify as a real job? Larger businesses had trouble hiring him when they were laying off other workers but one wonders why. These were not real jobs. i.e. with real futures

Would you ever listen to anything by Daniel Seddiqui again?

No. If he speaks to anyone, it's a much younger audience.

Would you be willing to try another one of L. J. Ganser’s performances?