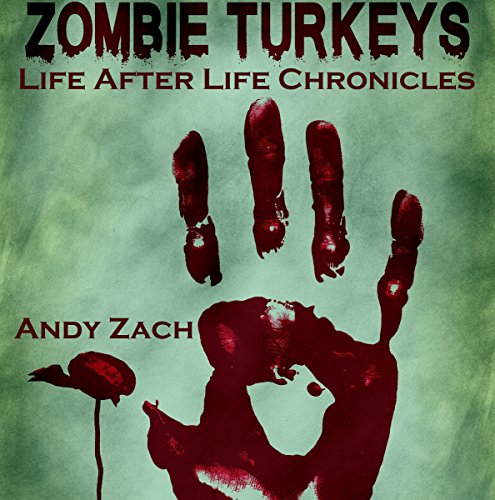 Sam Melvin, an underachieving e-reporter from a small town, changes forever when he meets turkeys that won't stay dead. You can shoot 'em, chop 'em, burn 'em — they come back stronger. The undead plague of poultry spreads uncontrollably, rocking the whole country. As Sam tracks down the zombie turkeys and how to eradicate them, his editor, Lisa Kambacher, nags him to turn his stories and expenses in on time. During their years of working together, Lisa has mellowed from bitchy into an irascible pinchpenny. Lisa snipes at Sam for plebeian writing but uses her intelligence to pursue the lucrative carnivorous turkey story. Sam and Lisa ricochet across the landscape, tracking turkeys and fleeing the bloodthirsty hordes. Careening from shell-shocked grocery store owners fighting turkeys crawling out of refrigerators, to machine-gunning turkey farmers, to secret militia, Sam and Lisa doggedly report. Throughout the turkey apocalypse, they dare ravaged cities, plow knee-deep in gore and corpses, and upload streams of zombie turkey video news to the world. With paranoid militias clashing with the federal government and unkillable turkeys, Sam and Lisa doubt their ability to survive. Sam and Lisa have no superpowers. If you have a heart condition or lack humor, you should not listen to Zombie Turkeys, no matter how much you want to find out what happens.

What listeners say about Zombie Turkeys

Comfort food for that juvenile part of you that never quite outgrew your comic books. Just forget that it's preposterous (after all, you were already warned by the title; what did you expect?), and go with the flow...

it's part outrageously funny, bizarre and compelling. A very good and entertaining and riveting story.

This was an amazing story. It was very entertaining with many LOL moments. I’m definitely hooked. Can’t wait to listen to the next one.

The narrators definitely made my day. They brought this book to life. Would recommend this book and author.

What a deliciously silly book! If you love zombies and comedy, this zombiedy story is for you. The whole premise of zombie turkeys is just so ludicrous it makes the whole tale funny, no matter how seriously the characters take their roles. Story is suitable for the whole family. Very little blood & guts, no swearing, sweet, innocent romance.

I really enjoyed the main characters, Sam and Lisa, who work for a small newspaper in Illinois. Sam is out for the real story, thoroughly enjoying his investigative reporting. Lisa runs the little newspaper with efficiency and soon she has the entire nation demanding their news reports. Zombie turkeys are a bad problem, for sure, but they have launched this small newspaper right into the big leagues.

I loved all the straight line jokes, like how the turkeys couldn’t possibly outsmart law enforcement or the military. Yet people aren’t thinking like turkeys, let alone zombie turkeys. In order to predict their behavior, one must mindmeld with the zombie turkey!

Then there’s the weapons deployed to eradicate the turkeys – flechettes, flame throwers, big knives, grenades, etc. The story takes every opportunity to poke fun at being over-prepared… for the wrong things. Yet, no one could possibly see zombie turkeys coming, right? The story ends with one final piece of investigative journalism which just might explain where these deadly birds came from. So looking forward to book 2! 5/5 stars.

The Narration: Phil Blechman & Raven Perez are a great duo for narrating this book. Blechman has the majority of the narration as most of the story is told through Sam’s eyes. Perez narrated for the ladies when the story switched to their point of view here and there. The recording was done very well as it sounded like these two narrators were in the same room. Both had unique voices for character and I loved their regional accents. It also sounded like both were enjoying the story. The pacing was perfect & there were no tech issues with the recording. 5/5 stars.

I received this audiobook as part of my participation in a blog tour with Audiobookworm Promotions. The tour is being sponsored by Andy Zach. The gifting of this audiobook did not affect my opinion of it.

This dark comedy combines action and humor set mostly against the back drop of rural Indiana. Sam and his editor Lisa run a small town newspaper, and in their search for a good lead stumble across the story of a life time - Zombie Turkeys! We follow the turkeys as they make their way from farm to farm gathering more all but immortal fowl while leaving death and destruction in their wake. Sam, Lisa, and soon more reporters track the turkeys across the country side learning not just how to fight back but how to destroy them. This story is not just action packed but is also full of unexpected heros and even has time for a love story or two.

This book is so mutch fun!! It's silly and ridiculous, but in a great way! It just brought a smile to my face and an extra skip in my step as I listened at work. My day is pretty monotonous and even the regular audiobooks I listen too just felt monotonous. I had already listened to My Undead Mother in Law and I remembered I had this one also. Remembering how entertaining U.D.M.I.L was I decided to play this one because I needed a pick me up. And pick me up it did. I made note of certain parts so I could play them for my husband at our lunch break. Definitely worth your time. The narrator's are perfect for this series. The turkey calls made me laugh out loud. Great job to all involved!!

Attack of the Killer Zombie Turkeys

I reviewed a copy of the audio book from the author in exchange for my honest review, and here it is. First book read/ listen from Andy Zach, and I'm totally hook. can't wait to hear/ RAF the remaining series. the story line is very entertaining, and the way they perform (yes perform not read) the book was perfect. Love the sound affects, they just made the story come to live. This story had it all, from killer zombies, love, mystery, and action. it's a must read/ hear. I totally recommended.

You have to check this book out. This was a far better book than I thought it would be. Mr Andy Zach has a 'ell of a imagination, and Mr Phil Blechman does a great narration. I especially loved his turkey gobbling sounds, I had a great laugh every time he did it.

This very funny tale has it all. There's peril, adventure, mayhem, even a love story and a happy ending.

I laughed so hard that I occasionally had to stop and go back a few minutes so I could hear what I missed while I was cracking up.
There were moments when I had to wipe my eyes, because I was laughing so hard I cried.

I received a free copy of this audiobook in exchange for my honest opinion.

A cautionary tale about pandemics or zombies

When you first listen it an amusing story the narrative is absolutely amusing, and the story a bit "camp", but under it's comic veneer ss I listened " locked in" at home from Covid 19 something very familiar emerges.
Yes this is a fun to listen to, totally entertaining book and one you can't storing listening to, however somewhat deeper it reflects the incompetent and bungling we are now experiencing world wide with this and possible other pandemics to come. This story parodies a disaster of Zombie Turkeys...but perhaps it warns us there could be far worst. Please do listen it overall great story and extraordinary naration.

Hilariously eyes watering funny!!! Narrator was perfect 👌 his voices and woman’s narrator was brilliant his turkeys call toooooooooo funny you will have to listen to know what I mean!!