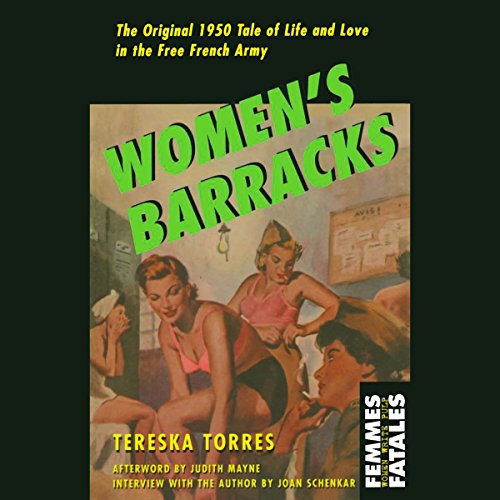 By: Tereska Torres
Narrated by: Heather Wilds
Try for $0.00

Originally published in 1950, this account of life among female Free French soldiers in a London barracks during World War II sold four million copies in the United States alone and many more millions worldwide. The novel is based on the real-life experiences of the author, Tereska Torres, who escaped from occupied France. She arrived as a refugee in London and joined other exiles enlisting in Charles de Gaulle’s army, then stationed in Britain awaiting an invasion of their homeland by Allied forces. But Women’s Barracks is no ordinary war story.

As the Blitz rains down over London, taboos are broken, affairs start and stop and hearts are won and lost. Women’s Barracks was banned for obscenity in several states. It was also denounced by the House Select Committee on Current Pornographic Materials in 1952 as an example of how the paperback industry was promoting "moral degeneracy". But in spite of such efforts - or perhaps, in part, because of them - the novel became a record-breaking best seller and inspired a whole new genre: lesbian pulp.

What listeners say about Women’s Barracks

A Frank Portrait of Women's Wartime

Tremendously engaging as a novel and informative as a picture of WWII among military women. This was the best selling lesbian novel ever.

Women's Barracks gives a portrait of the many experiences and relationships that form among the women of the free French army. Like Band of Brothers with French sisters.

The lack of "pulp" is what struck me. The Lesbian relationships are not presented with any raised eyebrows, or winks. Not common in the Fifties. It's not nearly as sensational as the cover would have you believe.

This is not Erotica

Would you try another book from Tereska Torres and/or Heather Wilds?

It was a history of French women serving in England to help support the resistance. That is really about it. It also goes into some personal relationships but NOT HOT and HEAVY

I'm requesting my money back because it was not as advertised, and it was boring.

A sensitive and beautifully written book about women in wartime.

This is a beautiful written story where each one of the characters are described in such a way as to draw you completely in to the lives and events of the french women who have enlisted to serve in the Second World War and find themselves living together in London. It does unfortunately not even attempt to detail their war time activities and very much frames their lives around the men they become involved with but perhaps that would be consistent with the time period. There is some mention of the UN and socialism but these are the opinions more of the men who feature briefly, rather than the women themselves. It does transport the reader to war time Britain with its vivid writing and makes you feel all of the emotions and longings of these women living in such harrowing and difficult times. There are some lesbian characters who feature briefly in the background as it details the love affairs of all the women in the story, which accounts for it being deemed sensational at the time of publication. It is not a deliberate attempt at erotica, it only serves to illustrate the different characters of the women and the personal struggles faced by those living in this time period. A sensitive and lively book with striking imagery which was a joy to read.