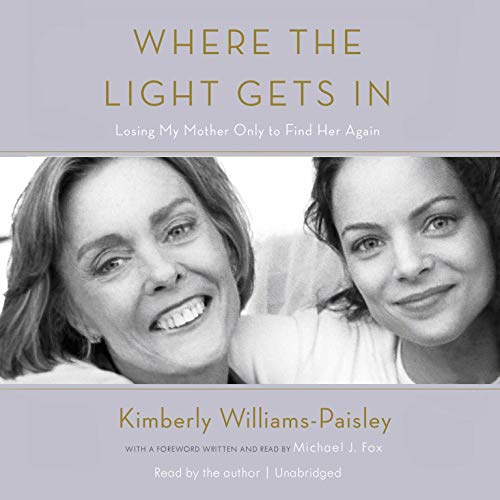 Where the Light Gets In

Many know Kimberly Williams-Paisley as the bride in the popular Steve Martin remakes of the Father of the Bride movies, the calculating Peggy Kenter on Nashville, or the wife of country megastar Brad Paisley. But in 2014, Williams-Paisley revealed a tragic secret: Her mother had been diagnosed with a rare form of dementia called primary progressive aphasia at the age of 61.

In Where the Light Gets In, Williams-Paisley tells the full story of her mother's illness, from diagnosis through the present day, drawing on her memories of her relationship with the fascinating, complicated, and successful woman who raised her so well. She describes educating herself on her mother's condition, letting go of the shame and secrecy that surrounded it, and finding unexpected humor and grace in a terrible situation. Her book also chronicles the ways in which her family's bond was strengthened by the experience, to becoming an awareness advocate, to accepting the woman her mother has become. It is a heartrending and inspiring reminder of how unbreakable our relationships with our mothers are.

What listeners say about Where the Light Gets In

Wish I had this book sooner

My Mother died in 2013 after a long battle with early onset Alzheimer's. My Dad died the previous year after a GBM brain tumor diagnosis and a 4 month battle. Prior to his death, Dad was Mom's caregiver and so many details about Kim's parents paralleled my parents. After my Dad's death, my sister and I became our Mother's caregivers. Fortunately we had the resources to allow Mom to remain in her home for the year she lived after Dad's death. I spent a great deal of the year "uptight". I wish I had books like this one at the time to slow me down and savor the time with Mom. My Mom was wonderful! She kept her sense of humor, was easygoing, and a joy! Where the Light Gets In reminded me so much of my Mom. The book was for me a reminder of the fact my Mom, Judy was still Judy. I think this book is a valuable tool to teach anyone who finds themselves in the caregiver role to honor the person, their memories (those are still there), and especially their dignity.

Just What I Needed Right Now

This was a wonderful book to listen to as I'm dealing with a similar life situation. Kim expressed herself beautifully--there are so many of us out here trying to figure out how to deal with elderly parents with dignity and grace. Sounds like she's doing a good job of it--right down to denying parents the right to drive, lest they kill someone, etc. It's wonderful to have siblings to help share the problem. Thanks for writing this Kim!!

If you could sum up Where the Light Gets In in three words, what would they be?

Kimberly of course. Her delivery was beautiful, entertaining, and full of life!

I belly laughed, and cried so deeply that I almost has to pull my car over until I could dry my eyes. What a beautiful, but tragic, family story. My hear goes out to all the caregivers, and I feel a deep sadness for Kim's mom.

This is an awesome audiobook that I highly recommend!

Kim was very honest and forth coming in her struggle to make sense of what was happening to her and her family. I loved it. I have learned to not take each day for granted and to communicate fully on what needs to happen at the end of this life. Thank you Kim!!

I really enjoyed Kim's reading of her story. She is such a wonderful reader and story teller. I felt as if I was sitting there with her as she recounted what she had learned about herself and her family in the slow loss of her mother to dementia. I was really moved by her stories of finding ways to break through the loss of her mother's mental capacities to reveal a heart that had not forgotten the joys of family, children, laughter and music. There is something for everyone in Kim's story, namely facing the challenge of caring for our love ones as they face the end of life. You will laugh, cry and ponder life with this book.

Excellent book! Beautifully read! Great resource! Kimberly Williams-Paisley gives a poignant look at what it's like to deal with the ambiguous loss of this devastating disease. Her voice adds to the experience of the book! I highly recommend!

Tears and Laughter at every page

Such a gifted storyteller! I highly recommend this book for any family member of a dementia patient. The honesty is so refreshing as you hear the emotion in Kim's voice. Thankful for this book!

this book was prefect. my maternal grandma has ppa. my mom died in her 50s. we've since had to manage and help my aunt make sinilar decisions as kim and jer siblings do. It's full of honest, cleansing tearful moments. "god wink". I write cards to my grandma and I am sharing with her Kims term because it's perfect!

...with a close relative with dementia. Having been through the process first with my mother and now with my brother I understand the issues and pain one faces. My advice is do not ever assure a close relative that you will never put them in a full-time nursing facility because there may come a time you have no other viable option. Dementia destroys its victims in the most obscene way. It is not much kinder to the victim's close family members.

This is an excellent story of love, forgiveness, understanding, and loss. Anyone who has experienced the slow loss of a family member through dementia or Alzheimer’s will relate to this beautiful story. Thank you for sharing such a personal journey.

An amazing book, thank you

wow, thank you so much for opening up about one of your own closest members of your family. If you choose to read this book, you will realise your not the only one going though this and are not alone thoughout. A definate hug type of book.