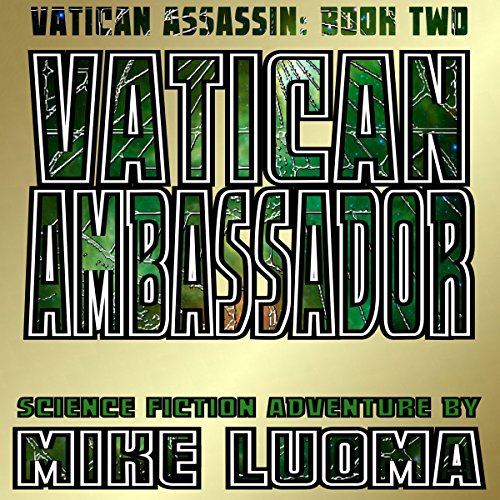 The Vatican Assassin - Bernard Campion, aka "BC" - used to kill for the Pope. But the old pope is dead. Seemingly unaware of BC's role, the new one names BC acting Vatican Ambassador to Lunar Prime! Can BC build peace between the Universal Islamic Nation (UIN), the Universal Trade Zone (UTZ) and the New catholic Church (NcC)? What is the mysterious "Project"? And do aliens really want us all dead?

Book Two of The Vatican Assassin Trilogy. The UIN's Christmas raid of 2109 - the latest battle in their long-running war with the UTZ - left great changes in its wake. BC's world is upside down, converted from assassin to potential peacemaker by a new Pope. BC tries to help Governor Marc Edwards rebuild Lunar Prime as he puts his own life back together, but soon discovers his world had been far more limited than he could have guessed. Triple agents, scientific enclaves on interstellar outposts, alien neighbors and interlopers - BC will soon find himself forced to consider a much broader frame of reference!

What listeners say about Vatican Ambassador

Did you ever take a chance on a book,  thinking this probably won't be that exciting and it ends up being one of your most treasured decisions?  That's what happened to me! I must be getting jaded but several of the highly rated current sci fi authors have left me cold recently with difficult to follow or boring storylines poorly "audibled"

This trilogy is very refreshing... Mike brings his characters to life with his exemplary narration which syncs perfectly with his real world writing style... I've rarely felt so connected with a story,  except with a few wonderful full cast audio dramas like Abigail Hilton's "The Guild of the Cowry Catchers"

Mike achieves this all himself, conveying each personality in his novels... Faithfully rendering his visions and bringing them to life.

In this second book of the trilogy the plot thickens,  becoming truly grander in scale.. This is  NOT your typical aliens meet humans story by any means... I love the unique unfolding of this original space Opera asking questions  of who we are,  what is out there  and... Oh,  it's a real hoot of a journey... I'm eagerly awaiting the third in this series which goes full bore into a cosmic collision on a galactic scale

He's reminded me of what good storytelling is all about... Thanks,  Mike!

Where does Vatican Ambassador rank among all the audiobooks you’ve listened to so far?

Alright first let me ask a question. Do you like Heinlein, Asimov, Clarke, Robinson, Niven, Hamilton? If you like any or all of those authors and their works, you'll like this series too. A great spacer trilogy that gives you a little of everything you'd want and at times makes you wonder if you are reading some lost work by Clarke, Asimov, or Heinlein but at the same time having a distinct flair that is Mike Luoma. Check this trilogy out, then read past it in the same world with the Alibi Jones stories.

Vatican Ambassador is book 2 in the trilogy and things really get going good. The Project, Lunar Prime, the classic fun of B.C. Well worth a read, or in this case a listen!