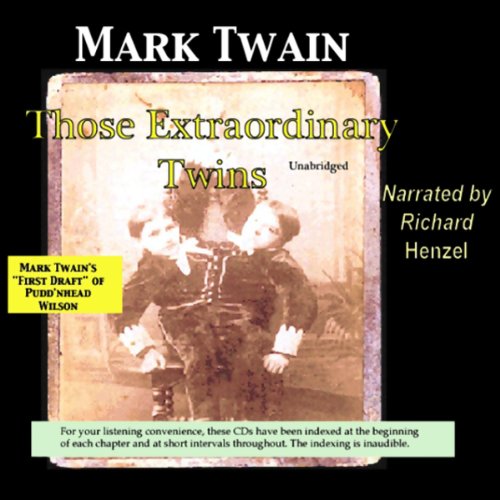 A man of many firsts, Mark Twain was the first author to use the typewriter and the first person to have a telephone in his home (which no doubt made him the first person to swear at tech support!). He patented the accordion file, the fountain pen, and adjustable suspenders. And when he published "deleted scenes" from Pudd'nhead Wilson as Those Extraordinary Twins he became the first publisher to include "bonus tracks" as well as the finished work.

As Twain said: "As a short tale grows into a long tale, the original intention (or motif) is apt to get abolished and find itself superseded by a quite different one. It was so in the case of a magazine sketch which I once started to write - a funny and fantastic sketch about a prince and a pauper....Much the same thing happened with Pudd'nhead Wilson, because it changed itself from a farce to a tragedy while I was going along with it - a most embarrassing circumstance....it was not one story, but two stories tangled together; and they obstructed and interrupted each other at every turn and created no end of confusion and annoyance. So I pulled out the farce and left the tragedy."

What listeners say about Those Extraordinary Twins

Only from the mind of Mark Twain

When a pair of Italian brothers who are Siamese twins arrive in the fictional Missouri town of Dawson’s Landing, they complicate Mark Twain’s writing of “The Tragedy of Pudd'nhead Wilson.”

Twain says in an introduction that he realized that while “Pudd’nhead” was a tragedy, “Twins” was a farce, and the result was “two stories tangled together.” So he separated them, in “a kind of literary cesarean operation.” Or like a pair of Siamese twins. They were originally published as two stories in a single book.

The brothers have two heads, four arms, and a single body on two legs. But they are distinct individuals, with sharply different views on politics, religion, and temperance, among others. In a story that only runs a little over two hours, one brother or the other is taken to court, fights a duel, gets baptized, and runs for office—always with the other opposed or in the way.

As he approached the problem of editing the combined plots, Twain claims that he briefly considered getting rid of five characters by saying that each “fell down the well and got drowned.” Then he thought about trimming the cast even further.

“I was going to drown some of the others, but I gave up the idea, partly because I believed that if I kept that up, it would arouse attention, and perhaps sympathy with those people, and partly because it was not a large well and would not hold any more anyway.”

The result is a hilarious short story with ample opportunity for Twain’s clever writing: when the brothers removed their shared jacket it was “like skinning a tarantula.”

But the story of how it came to be (if true) is almost as good as the story itself. Richard Henzel gives it an energetic reading bursting with small-town characters that are pure unmistakable Twain.

twain was in a state of bankruptcy when he wrote this, and you can really tell he pushed it onto the shelves before it was ready.