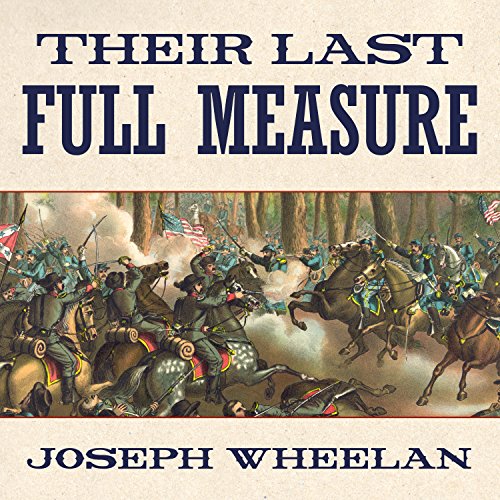 By: Joseph Wheelan
Narrated by: Bob Souer
Try for $0.00

As the Confederacy steadily crumbled under the Union army's relentless hammering, dramatic developments in early 1865 brought the bloody war to a swift climax and denouement. Their Last Full Measure relates these thrilling events, which followed one another like falling dominoes - from Fort Fisher's capture to the burning of South Carolina's capital to the fall of Petersburg and Richmond and, ultimately, to Lee's surrender at Appomattox and Lincoln's assassination.

Acclaimed historian Joseph Wheelan braids the disparate events into a compelling, fast-paced account of powerful armies; civil and military leaders, both flawed and splendid; and ordinary people, black and white, struggling to survive the war's wreckage in Virginia, Georgia, and the Carolinas.

What listeners say about Their Last Full Measure

I could not finish this audio book. The narrator is so flat and monotone it sounds like a computer reading it. No inflection, it's almost like the narrator hated the subject material. The book itself is quite well-written and enjoyable. Skip this particular version with this narrator.

Masterful mingling of facts and anecdotes.

The narration was respectful and professionally delivered. As Civil War historians and enthusiasts we were presented with ubiquitous information that has frequently been shared and yet spun with a nuanced flare. Thoroughly enjoyable.

Great history of the end of the war. Really enlightening. Many things that were new to me