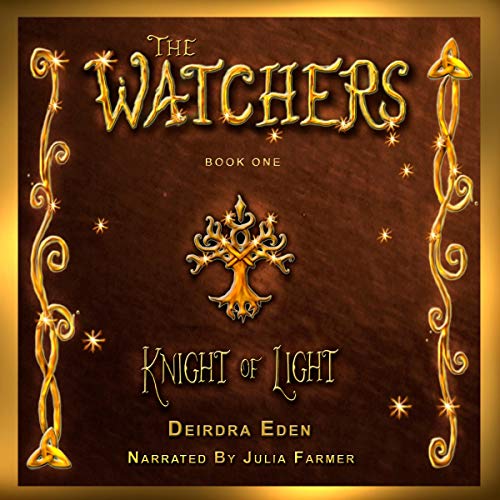 The Watchers: Knight of Light

By: Deirdra Eden
Narrated by: Julia Farmer
Try for $0.00

All the training in Heaven couldn't prepare me for the war on earth, nor for the love, loss, or loneliness humans feel. There are things worse than death, and every last one of them is hunting people like us. Even though we all feel human at times, we must remember, we are not them, we are their watchers.

In England, 1270 AD, Auriella flees her village after being accused of witchcraft. Pursued by nightmarish creatures, she struggles to accept the truth about her humanity. Filled with fairies, dwarves, pixies, dragons, demons, and monsters, Knight of Light is an enthralling tale that will capture the imaginations of listeners young and old.

The Watchers Series has been described as Braveheart meets Supernatural. The mythology for the series is based on many theological texts from dozens of sects with correlating themes. Ancient writings include the Dead Sea Scrolls, the Traditional Apocrypha, The Pearl of Great Price and the Kabbalah. The Watchers are supernatural beings in human form whose duty it is to protect and guard mankind from the armies of darkness. Unfortunately, as the Book of Enoch mentions, some of these Watchers go bad.

What listeners say about The Watchers: Knight of Light

Excellent beginning to a series

This was an excellent start to a series. There was action, joy, and heart break. The pace was steady and the narration was very good. I look forward to listening to the next book.

"This audio book was provided by the author, narrator, or publisher at no cost in exchange for an unbiased review courtesy of AudiobookBlast dot com."

What did you love best about The Watchers: Knight of Light?

It's storyline. The way this gripping adventure story is presented is good.

eAn Excellent narration has been done by her.

Yes, the moment when Auriella is transforming from a girl

If you could sum up The Watchers: Knight of Light in three words, what would they be?

The main character Auriella because she is so brave and resourceful.

What does Julia Farmer bring to the story that you wouldn’t experience if you just read the book?

Julia Farmer's narration is lovely and perfect for the story. I felt like a good friend was telling me a story.

A spiritual fantasy tale in the tradition of CS Lewis

I enjoyed listening to this audio book.

Yes, especially to someone with children. This book has all of the story and good moral benefits of a Disney movie, but it has all of the positive benefits for the mind that you get from reading a book. I think that this is a great option for children who love stories and want to get into a good story.

What was one of the most memorable moments of The Watchers: Knight of Light?

One of the most memorable moments in the book was when Cassi switched Rubert and Auriella's voices. It was done in a funny way and a great plot idea.

Which character – as performed by Julia Farmer – was your favorite?

Rubert was my favorite. He was smart, funny, and well voiced.

At first I wasn't a big fan of the narrator, but as I listened, I started to enjoy her performance more, so give her a chance.
I received this product at little or no cost in exchange for my honest, unbiased review.

A young girl living life to come to accept herself

Would you listen to The Watchers: Knight of Light again? Why?

I think one time through was enough for me. I got all the details and didn't feel as there were any hidden eggs here.

It was nice to see things step up to this stage. I was a bit sad to see that we move on with friendships though.

This story feels like a prequel in a sense to me. It brings Auriella to where she needs to be in mind and body through all she's lived through.

Julia is a new narrator to me. I found I liked her voice. Her voice is soft, gentle, like a whisper-y sound but not quiet. She speaks each work clearly. She has a slight accent that feels to suit Auriella. I liked the small, higher pitched voice for Cassie, it fits for a pixie. Julia does different voice sounds and tones for the many characters we cross here, which is always a great bonus. The quality of the narration is well done, clear, and enjoyable without distractions.

This story is of Auriella as she grows as a person in this world. After the first four chapters I felt like Auriella didn't have a direction in life. She's not planing on going anywhere, any plans or wants beyond getting away. She ran from the Shadow Lord, the people who believe her a witch, and then planed to run from the cruel witch she served. But there was no ideas after that. No drive other than away from harm. When Auriella finds Cassie she has more direction to save them both. In chapter ten, about two hours in, we get a strong purpose for Auriella. This is when she finds out what she is but still has to verify it. This is something Auriella has to come to accept to move on with what she was sent here for, time will help her accept this as she ages and grows. It's close to the end when she knows what it is she wants to do, and goes for it full steam. Which is why it feels like a prequel to me.

This is a Young Adult Fantasy read. Something for young readers to start to read with minimal violence and gentle love.

I enjoyed the book and the reading of it. I can't wait for the next one! Besides a good storyline, I love that I'm going to be able to share it with my kids. I love action movies and the like but I dislike the language and gore - this book was perfect! This book has action and no foul language or gore. I'm also loving the lessons that could be taught from this story.

I wasn’t sure what I would think when I started this book. I just finished another series so I decided to give it a try. I am so glad I did! It completely surpassed my expectation. I just love the main character and sympathized with her so much. I could not sit the story down. My only disappointment is that the other books are not on audible. I was also so impressed by the narrator I am going to check out one of her other books.

This was a fun book.A young girl is the only survivor of a fire that killed her family.She then pulls other kids from a fire and is not burned.She is then accused of being a witch,which she is not.She is something much more special and will find her way with two friends.Julia Farmer was the perfect narrator.I was given this book free by the author,narrator or publisher.

This story had the main character as a female who had these special powers. I really enjoyed the love romance between her and a young gentleman. It was a fun love romance, but it still had it's medieval parts with sword fights and knighthood.

What does Julia Farmer bring to the story that you wouldn’t experience if you just read the book?

I really enjoyed how Julia Farmer used different voices to represent each character, and her tone and pitch was perfect for each character making it fun and entertaining.

I really enjoyed that I could listen to the book while doing dishes, laundry, or getting ready. It was nice to just relax and listen to the audiobook. I would recommend this audiobook to those who like adventure, romance, and medieval then this would definitely be an audiobook to listen to.

This book covers Auriella's teenage years and the discovery of who she is (or was). Despite adversary and fear (hers & others) she manages to hold onto hope, joy and a willingness to help make the world better.

I was confused about how the title "The Watchers" played into the book, but once I listened to chapter 19 (audio chapter 20) everything fell into place. I definitely want to learn more about Neviah in future books.

Julia Farmer did a fabulous job immersing the listener in the world and giving each character a distant voice and personality. I especially enjoyed her portrayal of Cassi, the pixie, which added extra energy & some humor each time she spoke.

My favorite idea from this book (paraphrased) is that things change not by one person doing millions of things, but by millions of people doing what they can. For the latter to happen, Auriella is the perfect inspiration.

This audiobook was provided at no cost in exchange for an unbiased review courtesy of Audiobook Blast.