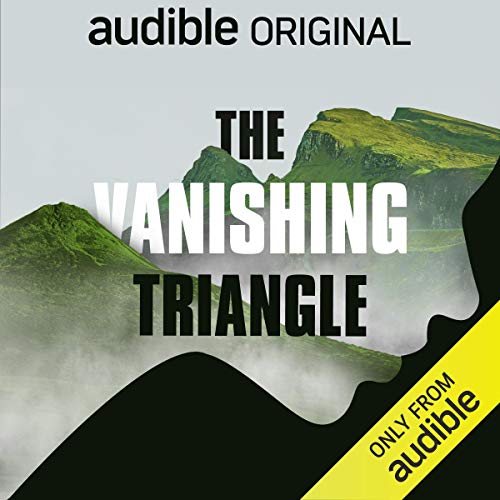 Ireland, the 1990s. Eight missing women. Did a serial killer prowl the vanishing triangle? And if so, were they ever caught?

Between 1993 and 1998, eight women went missing from an area around Dublin that became known as the ‘Vanishing Triangle’. Was there a link? Speculation abounded. There were whispers of a serial killer, responsible for some, if not all, of these cases. But nobody was ever brought to justice.

Twenty years later, the brutal murder of Jastine Valdez disturbs crime Novelist Claire McGowan into action. Reminded, like many in Ireland, of those previous missing women, McGowan brings her skills as a novelist to the real world, setting out to uncover the truth of the vanishing triangle. As she digs deeper, she finds something terrible lurking behind the idyllic image of rural Ireland and the 21st century success story of the ‘Celtic Tiger’. An incompetent police force, a traumatised nation and, a rank, murderous misogyny.

But are the disappearances linked? Are they linked with other murders? Was there, is there, a serial killer on the loose?

Original music by Sarah Lynch. Sarah Lynch is an award winning Irish film composer who has scored soundtracks across a wide range of genres including film, TV, and games. Most recent projects include ‘Don’t Leave Me’ directed by Hadi Hajaig and a collaboration with the composer Stephen Rennicks on the BBC3/HULU series Normal People. Sarah has also performed live and recorded with artists such as Hozier, Shane McGowan, Mumford and Sons and Ed Sheeran.

What listeners say about The Vanishing Triangle

Fascinating content overall - some really interesting cases. The author has done some great research but seems to spend as much time discussing abortion rights, gay rights and sexism as she does talking about the cases. There may well be a place for this discussion in the context of the time but this is overkill in my opinion.

It was very interesting overall, although one other minor quibble is the author's insistence that she had never heard of any of these cases in her youth. I am from Ireland and a similar age and these cases were never off the news in my memory (and rightly so). Great to have a book to remind us of crimes we have never solved though. I am still hoping the murders of Fiona Sinnott and Fiona Pender will be solved some day.

I worked in and around the Vanishing Triangle in the late 90s and early 00s and I was aware that there were several missing women, but listening to this book I realise that I knew almost nothing about them. Yet this book is so much more than a story about missing women. Thoughtful and thought-provoking, terrifying, and terribly sad, it looks at male violence towards women and the place of women and young girls in Irish society. Much has changed there in the last 20 years but - sadly - this book highlights issues that remain relevant, and not just in Ireland.
This is true crime from a feminist perspective and it's definitely worth a listen.

Not a story, just a rant.

I had hopes that this book would provide insight onto the cases of these missing women in Ireland. However, right from the prologue, it becomes apparent that this book is nothing but the author's rant against Irish society and in particular Irish men. A listener would probably come away with the view that every single Irish male is a misogynistic rapist.

Although I’m Irish, living in the south, female and in my 30’s so much of the book was new to me. I felt it was excellently researched. I have heard of some of the missing women’s cases but in all I learned new facts and possible links, suspects etc. An eye opening read over all.

Relatable story for many women .

Like the author I grew up in Ireland in the 80's and 90's except I lived down south in Dublin not to far from the Wicklow Mountains and the Vanishing Triangle area.
I have heard the stories of most of the women and their disappearances before mostly due to a few tabloid stories in the late 90's early 2000 pointing out the similarities in their cases and the fact we may have a seriel killer in Ireland .
I have always been haunted by their faces and like the author could relate to so many of them at the time of there disappearances been close in age to some of them
Ireland in the 90's was a very different place and not having the Troubles like the author to contend with down South it was not unusual to accept a lift after a night out if that was your only hope of getting home or indeed walking home alone which I had done many times .
Listening to the story at times I found myself wringing my hands and shouting out at the phone that fact that certain people have been allowed to go free Larry Murphy for example there are far to many coincidences that link that man to many of the disappearances.
I agree Ireland feels like a small island at times but somehow it just doesn't seen right and a huge miscarriage of justice when he was set free a few years back .
It seems to me that the people convicted for horrible violent crimes again women and children are often only given a tiny sentence and others convicted of robberies and fraud are given much longer prison sentences.
This I feel sends out a huge message that we do not value the lives of women and children and that masdogany is still alive and well in Ireland .