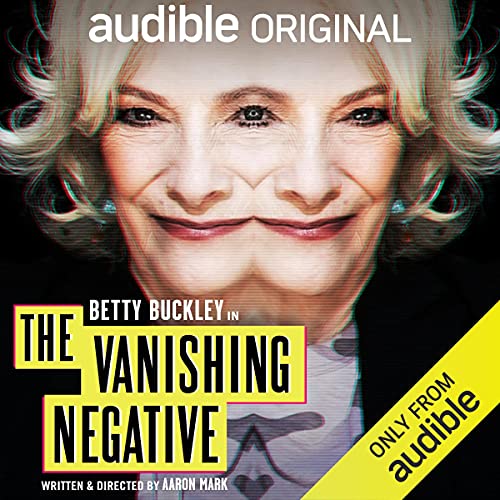 By: Aaron Mark
Narrated by: Betty Buckley
Try for $0.00

Aaron Mark is a writer and director of theater, audio, film, and TV, currently based in Los Angeles by way of Houston and New York City. He is the creator, writer, and director of Gimlet Media/Spotify's hit fiction podcast The Horror of Dolores Roach (starring Daphne Rubin-Vega, Bobby Cannavale, Richard Kind, Vanessa Williams, Michael Urie, Lea DeLaria, Donnell Rawlings, and Amy Ryan, among others), currently in development for TV with Amazon Studios and Blumhouse Television, with whom he is under a first-look deal. Mark has written and directed three acclaimed one-person horror plays Off-Broadway: Empanada Loca (LAByrinth Theater Company, with Rubin-Vega; three Drama Desk nominations, Outer Critics Circle nomination), Squeamish (All For One at Theatre Row, with Alison Fraser; OCC nomination), and Another Medea (All For One at the Cherry Lane and Wild Project, with Tom Hewitt), all published by Dramatists Play Service and performed internationally. Other plays include Deer, also published by DPS and recently given its Italian-language premiere. Favorite theater directing credits include Ben Rimalower's long-running, award-winning Patti Issues and Bad with Money; The Mystery of Irma Vep, and Deathtrap for Berkshire Theatre Group; and Hedwig and the Angry Inch for BC/EFA at New World Stages. Mark is a New York Theatre Workshop Usual Suspect and a member of the Writers Guild of America West and the Stage Directors and Choreographers Society.
Betty Buckley
Betty Buckley (cont.)

Betty Buckley is a multi-award-winning actress and singer whose career spans theater, film, television, and concert halls around the world. She is a 2012 Theater Hall of Fame for Inductee and a 2017 recipient of the Julie Harris Award from The Actors Fund for Artistic Achievement. She won a Tony Award for Cats and received her second Tony Award nomination for Triumph of Love, and an Olivier Award nomination in London for her performance in Sunset Boulevard, which she repeated to more rave reviews on Broadway.
She headlined the first national tour of the new Broadway production of Hello, Dolly! from fall 2018 through August 2019.
Her other Broadway credits include 1776, Pippin, Song and Dance, The Mystery of Edwin Drood, and Carrie. She starred in the London production of Dear World in 2013 and Promises, Promises (Evening Standard nomination).
Off Broadway she has starred in The Old Friends (2014 Drama Desk nomination), White’s Lies, Juno’s Swans, and Edwin Drood for New York Stage and Film, and Getting My Act Together and Taking It on the Road. Regional credits include The Perfectionist, Gypsy, Threepenny Opera, Camino Real, Buffalo Gal, Arsenic and Old Lace, and Grey Gardens (2016 Ovation Award nomination).
Her film credits include M. Night Shyamalan’s 2017 hit film Split, in which she costars with James McAvoy and received a Saturn Award nomination. Other film credits include Shyamalan’s The Happening, Brian de Palma’s Carrie, Bruce Beresford’s Tender Mercies, Roman Polanski’s Frantic, Woody Allen’s Another Woman, and Lawrence Kasden’s Wyatt Earp.
(Continued on next tab.)
Her TV credits include costarring in Season 3 of Preacher on AMC , NBC’s Chicage Med, HBO’s The Leftovers and Getting On, the miniseries The Pacific, and the series OZ. She starred for four seasons as Abby on Eight Is Enough and has made guest appearances on Law & Order: SVU, Without a Trace, and Pretty Little Liars. She also starred in the miniseries Bonnie and Clyde, Roses for the Rich, and Evergreen, and various films for television. She has received two Emmy nominations.
Buckley has recorded 18 CDs. Hope was released in 2018, Story Songs in 2017, and Ghostlight, produced by T Bone Burnett, in 2014. She has received two Grammy nominations and tours extensively in concert with her ensemble of musicians.
For over 40 years, Buckley has been a teacher of scene study and song interpretation in various universities and arts conservatories and teaches regularly at the T. Schreiber Studio in New York City, the Modern Art Museum in Fort Worth, Texas, and in Los Angeles, Denver, and Oklahoma. In 2009, Buckley was given the Texas Medal of Arts Award for Theater, and inducted into the Texas Film Hall of Fame in 2007. She has two honorary doctorates from the Boston Conservatory and Marymount College, and for her contributions to theater, she has been honored with three Lifetime Achievement Awards, from the New England Theatre Conference, the Shubert Theatre in New Haven, and the T. Schreiber Studio in New York. In 2018, she received the Sarah Siddons Award for outstanding performance in a Chicago theatrical production.
ORIGINALS

What listeners say about The Vanishing Negative

This story starts a little slow and I almost stopped listening but then it gets juicy and turns into a murder mystery! The end was great! Well worth the listen!

Love it and Betty is amazing as usual. I highly recommend, so give it a listen.

Betty is a master storyteller. The audience is treated to a flawless performance by a true legend!

This performance and story was crazy brilliant!! All around 5 stars! An absolute must listen

Story was enjoyable and the narration was Fantastic. Narrator brought the character to life in every way

I thought I was just going to listen to a rushed half thought audio book. What I got was a well crafted theater piece I could enjoy on my way to work! I’m floored. What started of light hearted quickly turned suspenseful and enthralling. Do not sleep on this!! I freaking love it!

Worth the listen! I was a little confused at first, but I hung in there and I was so glad I did. The story is a bit dark, and there definitely is some adult content. So I wouldn’t listen while kiddos are in hearing rage. I cleaned while I listened and before I knew it my chores were done and the book was finished. So good!

She is stunning - her range really made the story come alive. So dynamic, a must listen!

I won't say too much to spoil the story but I will say that you will not be disappointed and especially with anything regarding Betty Buckley because she is just simply awesome! I loved it!

I thought Betty Buckley's portrayal of a washed up psychic was on point. The story answers your questions as it unfolds which kept it interesting. The narration was great and the story held my attention. I liked the twist at the end.