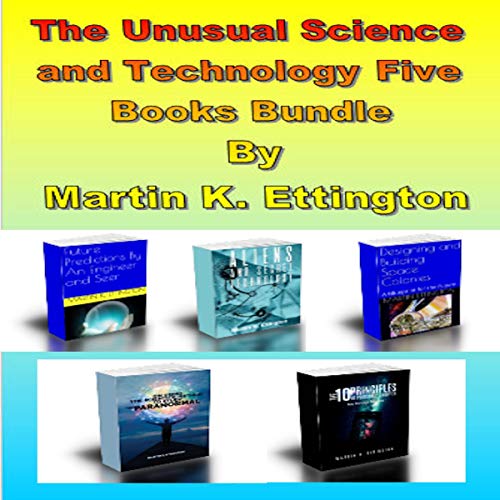 This is a really eclectic and fascinating bundle of five books on science and technology, all in one volume.

Future Predictions by an Engineer and Seer
This book does a thoroughly researched analysis of current trends in science, technology, and social dynamics. Then three factors - trend projections, paradigm shift estimates, and intuition - are used to project what society will be like out to 1,000 years in the future.

Aliens and Secret Technology - A Theory of the Hidden Truth
Is there secret technology which the United States government is keeping secret about anti-gravity and, possibly, about zero point energy? This book reviews the history of secret technology projects back to the Nazis in World War Two, and what our government has likely developed since then.

Designing and Building Space Colonies - A Blueprint for the Future
What is our probable future about building colonies in space? What technology will be needed? What technologies from the International Space Station can also help with developing space habitats? And what does the far future hold for space habitats?

On Using the Scientific Method to Study the Paranormal
This is my first book, written in the year 2000, but it still has some important observations about the limitations of the scientific method, the scale of believability, and much more.

The 10 Principles of Personal Longevity & Personal Freedom
I developed these principles after five years of research into longevity, including records of many people who lived well into their 100s - and even over 200 years. When you live by these principles, you have a good chance of living decades longer than a normal life expectancy.

The book was great and very helpful especially to any one who takes it online like I did. This book will be your right hand man so to speak.

Awesome item. I really appreciate this item and the service. Thanks a lot. Keep up the great work.

The presentation and the layout of the book is excellent and user friendly. Quite often I want to get answers for many questions. However, some listeners may find it overwhelming due to the amount of information in it, but it is an excellent source lo get you educated in technology. It has given me some kind of confidence.

This book is an excellent source for novice listeners. It has answered all my questions about the science, and it can put you on the right track and provides you with a solid background about technology in general.

Great book, very up to date with information about unusual science. Good audiobook that I needed for a class I was taking. So far so good!

It is a good comprehensive Book that helps one know what the current technology and tools in our modern world are and how to make the best use of both.

The book is very easy to follow and has excellent chapter reviews, word banks with page numbers, and sub-sections that permit easy reading.

I have become a fan of this author. The explanation is really great. Recommended to all.

Overall decent packaging and book was bind very well. Would highly recommend for those in communication and engineering classes.

It is sure an excellent book to start diving into the world of science. Grab this book and enjoy it.

The book skims on important topics. It asks review questions at the end of each chapter. It goes over key vocabulary words from the chapter. I recommend this book.

Great book and an easy, straight-forward read. If this book were a required textbook for high school students, the world would have a more realistic view of the world.