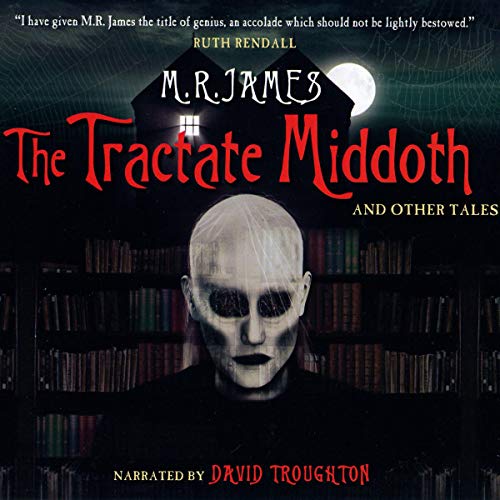 The Tractate Middoth and Other Tales

Considered by many to be the foremost author of the traditional ghost story, M. R. James was a distinguished scholar who spent his entire adult life in the academic atmospheres of Eton and Cambridge. His classic supernatural tales draw on the trepidations of the everyday, in which documents and objects unleash ghastly forces, often in enclosed confinements and nighttime settings where the imagination runs riot.

From isolated country houses to remote inns, ancient churches and vast libraries... These locations deliver intolerable menace from malevolent spirits seeking vengeance and harm. Eighty years on, these stories have lost none of their power to unnerve and disturb.

This new volume includes four tales which have been adapted for audio, expertly narrated by actor David Troughton: 'Number 13', 'The Tractate Middoth', 'Lost Hearts' and 'A View from a Hill'.

About the reader: an established stage and television actor, David Troughton's credits include Father Brown, The Café, Outnumbered, New Tricks, Midsomer Murders, Heartbeat, Fingersmith, Born and Bred, Casualty 1907, All the King's Men, Trevor's World of Sport, Drop the Dead Donkey, Kavanagh QC, Cider with Rose, Ted and Alice, Paradise Heights, Chips with Everything, Crime and Punishment and The Last Detective.

David's association with Doctor Who is vast and varied; he is probably best remembered as King Peladon in the Third Doctor adventure 'The Curse of Peladon' and as Professor Winfold Hobbes in Midnight, alongside David Tennant. He has also appeared in two other television serials, The War Games and The Enemy of the World, as well as voicing a huge variety of audiobooks and plays.

"I have given M. R. James the title of genius, an accolade which should not be lightly bestowed." (Ruth Rendall)
"A writer of great supernatural imagination, a master of style and purity.... I believe that it is unlikely his ghost stories will ever be surpassed." (Christopher Lee)

What listeners say about The Tractate Middoth and Other Tales