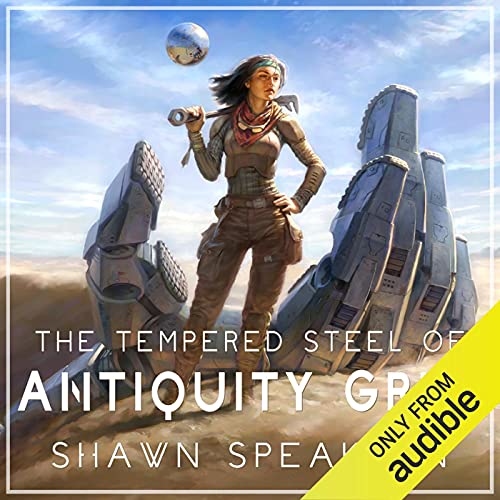 The Tempered Steel of Antiquity Grey

By: Shawn Speakman
Narrated by: Eva Kaminsky
Try for $0.00

Forever shamed for family actions a century earlier, Antiquity Grey is a young woman living in a far-future city of Erth. It is a life of danger and hardship, dragons and advanced technology.

But when she discovers an outlawed and operational mech buried in the sands of her planet, she realizes its secrets hold the power to reverse her family’s dishonor while challenging the Imperium’s off-world oppressive might. The Imperium is not so willing to loosen its grip, needing Erth’s valuable titanium resources at a time when war spreads among the stars. In response, the governor of Erth sends Star Sentinel - his mightiest mech, which nothing can stand against - after Antiquity.

As she flees into the wilderness in a desperate attempt to uncover the secrets of her past and free an entire planet, Antiquity learns friendship can mean more than family, even the hardest heart of an enemy can soften, and adventure is not what she thought it would be.

What listeners say about The Tempered Steel of Antiquity Grey

I just finished up the audiobook. I’m hoping this is the first entry in an entertaining series. The author did a great job building a post-apocalyptic sci-fi world with just enough elements of fantasy to keep me engaged. I quite liked the main character, Antiquity. She is feisty and confident, but not arrogant. I find this combination to draw me in most when reading. Antiquity’s friends (some questionable) accompany her in an endeavor to try to save and change their world. I’d definitely consider this as a YA read due to the length and pacing of the book, but there are some rather dark elements that are addressed, so keep that in mind if you’re picking up for a younger person.

Average and hard to listen to.

Story line was ok. Struggled to listen to the entire story as the narrator's inflection use for the main characters became tedious.

I appreciated how clean this book is, it was very interesting but also not filled with needless cursing or sex. Just a good read I could enjoy with my children around. Left me wanting another book or the next book, the ending leaves you feeling like it should be a series. Over all good and worth your time.

Well written, outstanding narration. I couldn't​ put this one down. The immersive setting grabbed me right from the start.