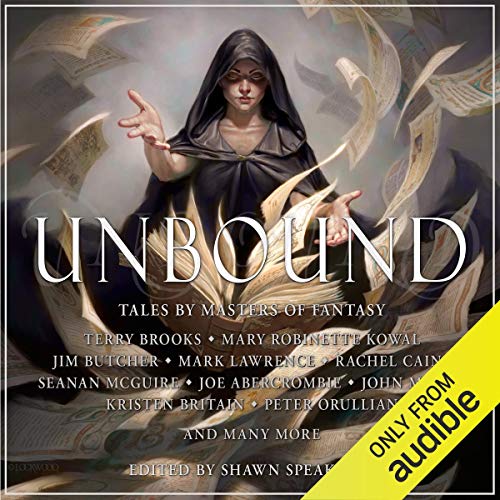 Not bound as a book. Free. Like Unfettered before it, the contributing writers of Unbound were allowed to submit the tales they wished fans of genre to hear - without the constraints of a shackling theme. The result is magical. Twenty-three all-original stories are sure to captivate you - some will move you to tears while others will keep you listening long into the night. The power of Unbound lies in its variety of tales and the voices behind them. If you are a fan of discovering new writers or hearing the works of beloved authors, Unbound is for you.

Return to Landover with Terry Brooks. Go to trial with Harry Dresden and Jim Butcher. Enter the Citadel, and become remade with Rachel Caine. Survive a plague with John Marco and his robot companion, Echo. Be painted among the stars by Mary Robinette Kowal. These tales and the others that comprise the anthology are bound only by how enchanting and enthralling they are.

Here is the lineup:

Unbound is filled with spectacularly wonderful stories, each one as diverse as its creator. You will be changed upon finishing it. And that is the point.

What listeners say about Unbound

I enjoyed this anthology, it was perfomed well and the stories were interesting. I would recommend this book.

As a fiction and fantasy fan of more than fifty years it’s always great to find new stories from authors unfamiliar, except for Terry Brooks and his new tale with some old “friends”. All the narrators were very good and this book is a wonderful listen.

There are some gems in this one

The thing with anthologies that the quality of the stories varies. It may not be the objective quality, but the type of the story and the author voice that you like or don't like, which translates to a kind of subjective quality of the story. Do I make sense here? The point is that I loved some stories, especially those that were written by my favorite authors, there were some which were OK, and I found a few that I just couldn't appreciate. I expected it, so no big surprise there. Giving three stars is a bit lame, because how can you make an average of good and bad stories? But I cannot rate the stories individually, so there is that. Nevertheless, Jim Butcher, Joe Abercrombie and Michael J. Sullivan didn't let me down (just to mention a few of my favorite authors), and I discovered authors that I haven't read so far (e.g. Brian McClellan).

as expected some stories were better than others. not all fit my tastes but were still performed well.

This one was surprising in that I actually liked almost every story in it. Some of them were slower than others, but I didn't outright dislike any, which is rare for an anthology that has more than 5 stories in it.

Rachel Caine - Madwalls - This. Story. Was. Amazeballs. I didn't dig the narrator (in fact I'm not at all a fan of Allyson Johnson as a narrator... so... this audiobook was less awesome for that since she narrates goddamn nearly a third of it.) Anyway, Rachel Caine writes djinn and things like them really well. The Weather Warden series rocked my socks and was definitely my gateway book into full fledged Urban Fantasy, so I have a real soft spot for her writing. This... being she's created was just awesome. I also loved the main character. You don't see Sikhs in fantasy too often. Awesome.

Delilah Dawson - Uncharming - I also really *really* love the Blud series. It is among the most well written Paranormal Romance I've ever read (with some of the worst covers, lol). It's para-romance with an actual plot, and character that are so... so wickedly well written. This story was about a background character from the third book in the series and it was neat getting a behind the scenes there. Loved it!

Terry Brooks - An Unfortunate Influx of Fillipians - Oh Landover. Never stop being ridiculous. I read the Landover series way back in high school and remember liking it slightly more than the Shannara series (with the exception of Elfstones which I will always love for being the first Fantasy book I ever read that wasn't LotR). I really liked that the narrator made Strabo sound like a gangster. Because he sort of is, in a way.

Brian Staveley - The Farmboy Prince - This story was short, full of cursing, and was really quite a good look into the farmboy prince trope from the POV of the other peasants. Awesomesauce.

Michael J. Sullivan - The Game - The idea that an NPC in an MMO suddenly gains sentience and what that would mean in the real world was a really great premise, and he has totally nailed it with this story. How does he write such *annoying* people so well? Also, reference in this story to a game called 'Elan Online' - I would play the absolute hell out of this game. OMG. - So, in conclusion here, Michael Sullivan and Tim Gerard Reynolds teamed up to get me all teary-eyed at work about a character I had known for approximately 20 minutes. Thanks, guys.

Jim Butcher - Jury Duty - I love how Jim Butcher can make a story about Harry Dresden getting jury duty entertaining. I also loved the introduction where he explained that sometimes he just likes to make Harry realistic in the fact that he has to do some real stuff. He has to do laundry and get his mail, fix his car, and stuff like that. I like that too. Harry does these things in a very entertaining way that usually involves White Court vampires or Winter Fae.

In conclusion, this anthology was overall a winner! I can't wait for Unfettered II!

I enjoyed the book of stories on a whole. Tim Gerard Reynolds was fantastic! I enjoyed the Jim Butcher short story a great deal, and Shawn’s own story at the end was also well done.

I like stories about villains. They’re a rare treat among the genre.

Joe Ambercrombe put out a great story that made me want to read more. It was a story I’ve been looking at in another book of his own for quite some time, and now that I’ve heard it, I recognize that I like his gritty heroic story style.

Mark Lawrence gave me a Nuban story. I’m very happy with that.

Brian McClellan gave me an early story about Tamas of Powder Mage fame, and it was really good as well.

But, the truly unexpected standout was the story about the Diamond Queen. I need more from that one. Another villainous character.

Overall, I enjoyed what I read.

Each story is so different and that alone makes this a refreshing read (...listen?...)
Highly recommend both books!

Really Love most of these stories

I think this book is great. I really like the concept of being introduced into new narrators and authors without having to spend 1 credit on trying each of them. I really love all of the stories except 1 of them which I say is great odds for this size of this collection. I only wish there were a couple more narrators because the book used Tim a lot. I really like Tim as a narrator, but he was highly active in this anthology.

so many great authors with original stories, & Micheal J Sullivan's "The Game" inspired by his years playing Everquest, in which I could relate. Loved it all!