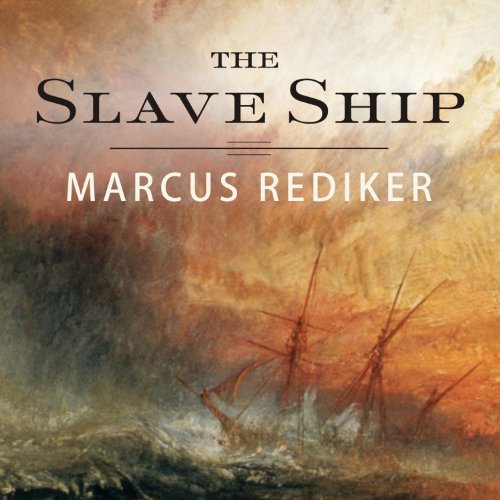 By: Marcus Rediker
Narrated by: David Drummond
Try for $0.00

For more than three centuries, slave ships carried millions of people from the coasts of Africa across the Atlantic to the New World. Much is known of the slave trade and the American plantation complex, but little of the ships that made it all possible.

In The Slave Ship, award-winning historian Marcus Rediker draws on 30 years of research in maritime archives to create an unprecedented history of these vessels and the human drama acted out on their rolling decks. He reconstructs in chilling detail the lives, deaths, and terrors of captains, sailors, and the enslaved aboard a "floating dungeon" trailed by sharks.

From the young African kidnapped from his village and sold to the slavers by a neighboring tribe, to the would-be priest who takes a job as a sailor on a slave ship only to be horrified by the evil he sees, to the captain who relishes having "a hell of my own", Rediker illuminates the lives of people who were thought to have left no trace.

This is a tale of tragedy and terror, but also an epic of resilience, survival, and the creation of something entirely new, something that could only be called African American. Rediker restores the slave ship to its rightful place alongside the plantation as a formative institution of slavery, as a place where a profound and still haunting history of race, class, and modern capitalism was made.

"I was hardly prepared for the profound emotional impact of The Slave Ship....Reading it established a transformative and never to be severed bond with my African ancestors who were cargo in slave ships." (Alice Walker, author of The Color Purple)

What listeners say about The Slave Ship

Wow! What a book! Everything you wanted to know about slave ships, the business of slavery, & more.

This book detailed the whole sordid story of slavery as a business machine and its mass production of human cargo as a commodity. The perspective of everyone connected to the slave ship is detailed. There are stories from the captains, the merchants, the crew members, and the slaves themselves—all with their unique viewpoints of their situations.

Many slaves continually fought their captivity by choosing to commit suicide through starvation or by throwing themselves overboard. As suicide resulted in a loss of profits, actions were taken to ensure the health of their “product”. Netting was set up around the ship to prevent slaves from jumping off the ship and those refusing to eat were gruesomely force fed.

Insurrection occurred on 1 in 10 ships and resulted in torture and murder of those responsible. Discipline as a deterrent was frequent aboard the slave ships. Man’s inhumanity toward man in these cases were stomach churning. The images of bodies (either dead, as suicide, or as a form of torture) being thrown overboard still haunts me. As the remoras attach themselves to the sharks, the sharks attach themselves to the slave ships and instantly devour anything that falls into the water. The thought of that form of death still gives me the chills.

There was a quote in the book from William Wilberforce (an English social reformer and abolitionist) that sums it all up for me, “So much misery condensed in so little room is more than the human imagination has ever before conceived.”

This was my first experience with this reader and I have to say I was very impressed. Many readers have the strangest inflections that always take some time to get used to. David Drummond’s reading of the book was clear, mellifluous and pleasant. Both the content and the narration make this a worthy listen.

The power of the stories in this book make it the perfect audiobook. The incredible greed, disconnection from and assault on humanity chronicled here were, for me, matched by the stories of resistance and of love and compassion that survived the unimaginable. This book brought me to tears and for me it was hearing the stories that had such an impact. I felt like I was taken on an amazing journey.

I didn't realize when I purchased this that this book was basically a compilation of many, many stories about the slave trade and if I had known that going in I probably would have been skeptical about the quality of the book. However, I was pleasantly surprised and found that the format actually worked quite well and allowed for a broader look at the subject, from the types of ships used to the types of people who manned them and the stories of the people transported in them. This book is very comprehensive and well written.

I have read much about enslavement but I agree that this book, with its entirely tight focus on the ship, is of tremendous value to the study of the period.

A very moving human history, that everyone should be aware of, to make sure that such a cruel drama shall never been palyed again on the stage of earth.

What did you love best about The Slave Ship?

This novel brought to light the horror and brutality of the slave trade in very vivid details.

This book was too painful to listen to all at once. There were times that I had to take a break and come back to it later.

To truly understand the brutality of slavery, this book is a must read.

A history everyone should know.

What did you love best about The Slave Ship?

I learned a great deal about human history, as well as why slavery THEN, means something very important NOW. This was a crime of as great a magnitude as any in history, and yet it is little discussed today. Given the numbers of people hunted down incarcerated, shipped, murdered, and stripped of all humanity, it's amazing that a clear history such as this one was so late, historically, in coming along.

While this book does say a lot about the slave ship, it says so much more. The title is modest. It's a much more far reaching book.

What other book might you compare The Slave Ship to and why?

1493, which describes the globalization of humanity, animals, plants, and diseases, from a different perspective. Both books tell a great deal about how humanity got to where we are today.

I will listen to it again. It bears repeating.

Clarified and provided in depth information regarding the culture aboard slave ships and the methods of obtaining slaves .

This book had to have been heavily researched. The stories are horrifying, and compelling, and brought me to tears multiple times

A thoroughly enlightening history of the slave ship and the role it played in the kidnapping and enslavement of African people for the sake of international capitalism.