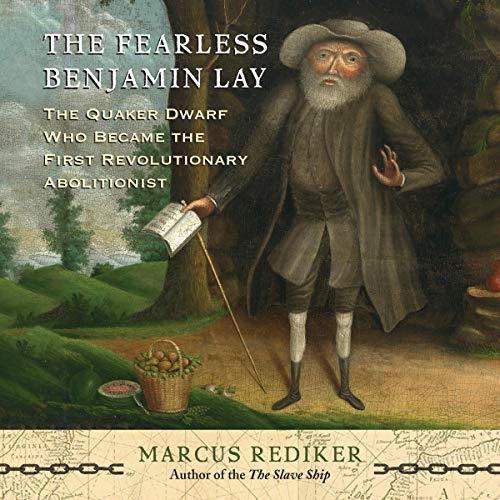 By: Marcus Rediker
Narrated by: Cornell Womack
Try for $0.00

The little-known story of an eighteenth-century Quaker dwarf who fiercely attacked slavery and imagined a new, more humane way of life

The Fearless Benjamin Lay chronicles the transatlantic life and times of a singular and astonishing man - a Quaker dwarf who became one of the first ever to demand the total, unconditional emancipation of all enslaved Africans around the world. He performed public guerrilla theater to shame slave masters, insisting that human bondage violated the fundamental principles of Christianity. He wrote a fiery, controversial book against bondage that Benjamin Franklin published in 1738. He lived in a cave, made his own clothes, refused to consume anything produced by slave labor, championed animal rights, and embraced vegetarianism. He acted on his ideals to create a new, practical, revolutionary way of life.

What listeners say about The Fearless Benjamin Lay

How is this story coming too light only now!? a compelling (and fast) read about a man well ahead of his times.

I highly recommend it!

I loved this book. Womack's reading is clear, professional and well recorded. His cadence is highly formal and evokes documentaries and news reports. Maybe too formal. His cadence seems repetitive and dry, as if the book went into Womack's eyes and out of his mouth without truly passing though his brain.

I learned a lot and enjoyed the biography. It brought to life an important work of art and an a singular and important life. The shenanigans in England are a bit dry but contained an important warning to us all.