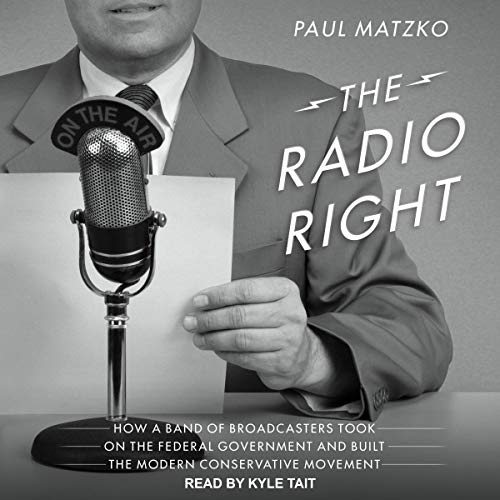 In the past few years, trust in traditional media has reached new lows. Many Americans disbelieve what they hear from the "mainstream media", and have turned to getting information from media echo chambers which are reflective of a single party or ideology. In this book, Paul Matzko reveals that this is not the first such moment in modern American history.

The Radio Right tells the story of the 1960s far right, who were frustrated by what they perceived to be liberal bias in the national media, particularly the media's sycophantic relationship with the John F. Kennedy administration. By the early 1960s, millions of Americans listened each week to conservative broadcasters, the most prominent of which were clergy or lay broadcasters from across the religious spectrum, including Carl McIntire, Billy James Hargis, and Clarence Manion. Though divided by theology, these speakers were united by their distrust of political and theological liberalism and their antipathy towards JFK. The political influence of the new Radio Right quickly became apparent as the broadcasters attacked the Kennedy administration's policies and encouraged grassroots conservative activism on a massive scale.

What listeners say about The Radio Right