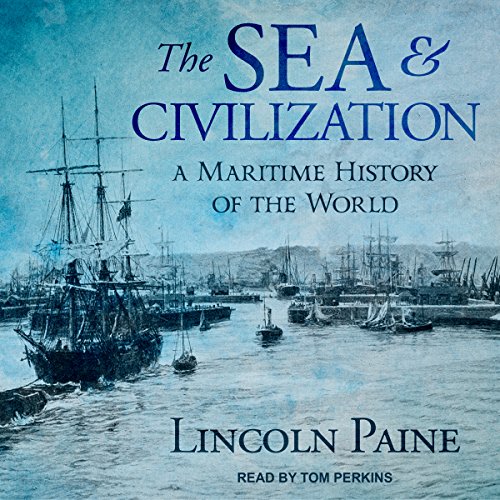 The Sea and Civilization

By: Lincoln Paine
Narrated by: Tom Perkins
Try for $0.00

A monumental retelling of world history through the lens of maritime enterprise, revealing in breathtaking depth how people first came into contact with one another by ocean and river, lake and stream, and how goods, languages, religions, and entire cultures spread across and along the world's waterways, bringing together civilizations and defining what makes us most human.

Lincoln Paine takes us back to the origins of long-distance migration by sea with our ancestors' first forays from Africa and Eurasia to Australia and the Americas. He demonstrates the critical role of maritime trade to the civilizations of ancient Egypt, Mesopotamia, and the Indus Valley. He reacquaints us with the great seafaring cultures of antiquity like those of the Phoenicians and Greeks as well as those of India and Southeast and East Asia, who parlayed their navigational skills, shipbuilding techniques, and commercial acumen to establish thriving overseas colonies and trade routes in the centuries leading up to the age of European expansion. And finally, his narrative traces how commercial shipping and naval warfare brought about the enormous demographic, cultural, and political changes that have globalized the world throughout the post-Cold War era.

"Paine's highly detailed work encompasses a wide array of topics, from trade and the influence of the sea on warfare and political coalitions, to ship building techniques through the ages, to piracy and slavery.... Paine has compiled an invaluable resource for salty dogs and land-lubbers alike." ( Publishers Weekly)

What listeners say about The Sea and Civilization

the ancient history is priceless but the new needs more attention, thoroughly enjoyed it and definitely reccomend it as a primer!

This book covers just about every region on Earth through all the centuries and has a lot of great history. It also covers archaeological sites and written accounts and describes where they differ or contradict each other. If you like history you'll like it. So many history books cover and re-cover the same material this book goes out of its way to cover things you may never have heard of.
HOWEVER without a map, or a lot of maps, you'll be lost if you don't have a previous deep understanding of any given region being described. I'd characterize myself as being quite proficient in world geography and I'm having trouble keeping up at times. So a hard copy with maps (if the regular book provides maps) would be helpful but it's a great audiobook regardless. You'll learn a lot and with things you already know about you might get one or two little extra interesting facts you didn't know before.

Particularly well researched, especially Far East, India, Caliphates to Byzantine seas... Early voyages of Exploration and Expansion make the 1500-1650 period come alive like an explosion. A Great overview for anyone unfamiliar with international trade by sea and ship, prehistory to our modern world.

I have read this book before a long time ago, and if u finish it, then you will have least have a BA Degree on the Sea. Starting with the moving of the plates on earth floating around in a sea of molten rock, too the earth that was flat and a couple other steps, your in free fall for eternity. This book is basically on how the sea is intertwined with us inside and out, and how water helped evolving man forward, and also held back man in an evolutionary sense, as I hope you did not think that evolution went at the same pace in the world, as Dr Thomas Watson the Nobel Peace Prize winner suggested and was burned at the stake by Science itself, one of the biggest injustices known in Science.
Commonsense tells us that very likely, but the good doctor was doing Science, and when he discovered the double helix, being politically correct was not a factor. The Sea was the prime media if you will, and to deny that, then you might be a Christian such as myself. You know those folks that believe God created Science, but also Faith.

Course of history as defined by the sea

excellent text covers history and the significance of the world's oceans and seas. it is well researched and audio reading was high quality