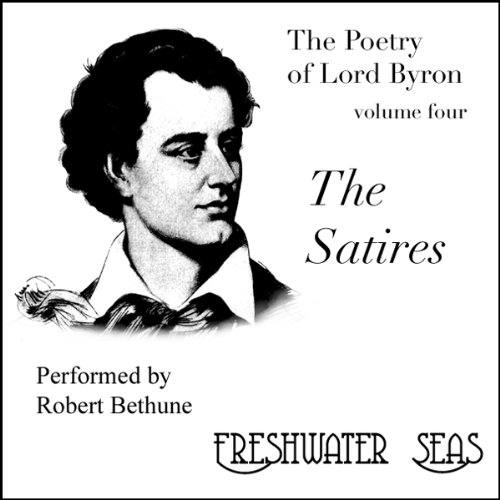 The Poetry of Lord Byron, Volume IV: The Satires

The Poetry of Lord Byron, Volume IV: The Satires

In this, the fourth volume of this series, we hear the poetry in which Byron began to make his mark on the world. Though his major breakthrough with "Childe Harold" is yet to come, his "English Bards and Scotch Reviewers" was a definite hit in its time, establishing Byron as a known poet and ensuring that his reputation as a literary bad-boy was off to a good start.

"English Bards and Scotch Reviewers" was his first major satire and one of his most effective; we can't help seeing that the "Scotch Reviewers" who had harshly criticized Byron find themselves on the losing end of the battle.

However, Byron's satirical shots didn't end with the reviewers. He took on the literary lions of the day - a remarkable feat for so young a writer - and scored well there too, though later in his life he deeply regretted having been so harsh on his fellow poets. He continued to lambast the poets of his time in Hints from Horace, in which he takes on the task of admonishing the rest of the poets of his world to do things his way while showing up quite a few of them for having committed, in Byron's view, the crime of writing bad verse. For the modern reader or listener, this volume is a useful antidote to the image of Byron we take from his romantic poetry. Byron wasn't always the dreamy romantic, head in the clouds and heart on fire. He could be, as here, as sharp, as pointed, and as firmly rooted in the polemics of this world as any other satirist in the English tradition from Pope to Swift and beyond. Satire was not his major gift, but it was a real one, and we can hear it in these poems and thereby learn to know the other side of Lord Byron. Enjoy!