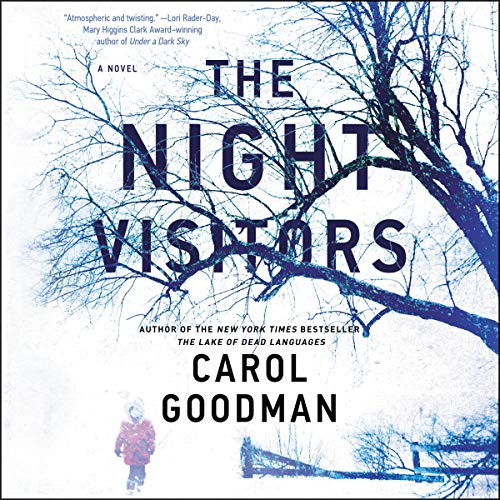 By: Carol Goodman
Narrated by: Jane Oppenheimer
Try for $0.00

The latest thriller from the internationally best-selling author of The Lake of Dead Languages and The Other Mother, a story of mistaken identities and missed chances, forgiveness, and vengeance.

Alice gets off a bus in the middle of a snowstorm in Delphi, NY. She is fleeing an abusive relationship and desperate to protect Oren, 10 years old, a major Star Wars fan and wise beyond his years. Though Alice is wary, Oren bonds nearly instantly with Mattie, a social worker in her 50s who lives in an enormous, rundown house in the middle of the woods.

Mattie lives alone and is always available, and so she is the person the hotline always calls when they need a late-night pickup. And although according to protocol, Mattie should take Alice and Oren to a local shelter, instead, she brings them home for the night. She has plenty of room, she says. What she doesn't say is that Oren reminds her of her little brother, who died 30 years ago at the age of 10.

But Mattie isn't the only one withholding elements of the truth. Alice is keeping her own secrets. And as the snowstorm worsens around them, each woman's past will prove itself unburied, stirring up threats both within and without.

What listeners say about The Night Visitors

Not the book I wanted it to be.

I thought this was going to be a psychological thriller. It was not. So disappointed. Had to finish it because I didn’t want to leave it unfinished. It made me angry to have to sit through the last hour and a half. Can I please that time back?

An Erie and atmospheric thriller.Brimming with tension and peppered with the supernatural!

Carol Goodman has crafted a creepy and addictive tale that will keep you up far past your bedtime. Unique and clever, this is a story you don’t just read you experience. Miss Goodmans descriptive writing will have you shuttering and covered in goosebumps. The feeling of impending doom and the cold of the snow seep through the pages of this book.

There is an element of the Supernatural in this book that added the perfect amount of tension to the story.

Alice and Oren arrive in a small town in the Catskills by bus in the middle of the night. Mattie A complete stranger is waiting for them at the bus station. She works for an agency that finds placement for women and children fleaing domestic abuse. Mattie is immediately drawn to Oren, for that reason and the impending blizzard she takes them home with her rather than to the shelter. Mattie still lives in her family home, a once beautiful old Victorian now in need of much repair. The house was as much a character in the story as Mattie, Alice, and Oren. Each of these characters is hiding something and the truth might possibly put their lives in danger. Who can be trusted? And what will happen when the secrets are revealed?

A creepy house, a brutal snowstorm, intriguing characters, and dark secrets all make for a compelling story. I really liked both Alice and Mattie, But I was also suspicious of both of them throughout the book. Oren was an adorable kid and I loved his passion for Star Wars. I really wanted everything to work out for all these characters, I just wasn’t quite sure what that was? I loved how the layers of this story were peeled away and the truth was eventually laid bare. Towards the end of this book I was seriously on the edge of my seat, the tension was palpable, and the results startling.

A cunning tale that was simultaneously creepy and heartwarming. A unique thriller packed with twists and turns and a shocking end!

*** many thanks to William morrow for my copy of this book ***

Carol Goodman is one of my favorite writers. The storyline behind this book between Maddie and Alice was interwoven with intrigue mystery and all of the twist that she’s known for. The storyline kept me guessing as to what direction the plot would be taken. I was not disappointed in the storyline. I will give one word of caution the narration of this book was poor. The story is told by the two women Maddie and Alice the narrator did not change her voice inflection while the train these two women it’s sometimes made it difficult as to who was speaking Alice or Maddie I had to go back and re-listened to certain parts to understand who was speaking. I will not choose to listen to another book by this narrator

I really enjoyed listening to this book. It kept my interest and I liked the psychology involved and real life workings of the ways abused women and children can be helped. Worth the listen!

Great matchup of narrator and text

This well written and especially well plotted fiction was hard to put down. Jane Oppenheimer has one of those “read me the phone book” voices, and it works perfectly with Goodman’s well drawn, motivated characters. I truly enjoyed this listen.

Suspenseful till the end

There are so many twists and turns it’s hard to stop listening. I loved the way it all worked together and would definitely listen to it again.