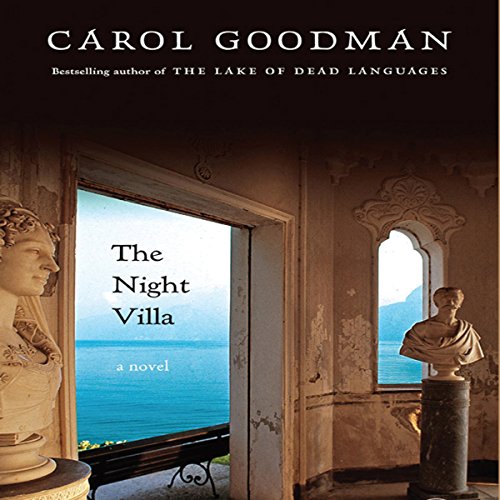 By: Carol Goodman
Narrated by: Susanna Burney
Try for $0.00

The eruption of Italy's Mount Vesuvius in A.D. 79 buried a city and its people, their treasures and secrets. Centuries later, echoes of this disaster resonate with profound consequences in the life of classics professor Sophie Chase.

In the aftermath of a tragic shooting on the University of Texas campus, Sophie seeks sanctuary on the isle of Capri, immersing herself in her latest scholarly project alongside her colleagues, her star pupil, and their benefactor, the compelling yet enigmatic business mogul John Lyros.

Beneath layers of volcanic ash lies the Villa della Notte - the Night Villa - home to first-century nobles, as well as to the captivating slave girl at the heart of an ancient controversy. And secreted in a subterranean labyrinth rests a cache of antique documents believed lost to the ages: a prize too tantalizing for Sophie to resist.

But suspicion, fear, and danger roam the long-untrodden tunnels and chambers beneath the once sumptuous estate - especially after Sophie sees the face of her former lover in the darkness, leaving her to wonder if she is chasing shadows or succumbing to the siren song of the Night Villa. Whatever shocking events transpired in the face of Vesuvius's fury have led to deeper, darker machinations that inexorably draw Sophie into their vortex, rich in stunning revelations and laden with unseen menace.

"Goodman deftly mixes cultural and religious history, geography, myth, personal memory, dream and even portent without sacrificing narrative drive, against the beautiful backdrop of the locale with its echoes of unimaginable loss." ( Publishers Weekly)
"The pleasure of a Carol Goodman novel is in her enviable command of the classical canon - and the deft way she [writes] a book that's light enough for a weekend on the beach but literary enough for a weekend in the Hamptons." ( Chicago Tribune)

What listeners say about The Night Villa

Keeping true to the authors style in fiction with a fantasy/mythos understory. I very much enjoyed this book. There was adventure, history, mystery, mythology. A good ending(not obviously predicable) and I felt like it was well written overall.

This story is not quite as pg as some on her other works.

Enjoyable narrator.
Story is adventurous and interesting. A good listen.

I loved this story for it’s elaborate storyline with historical elements. It seemed like the Divinci Code toward the end. Being from Austin, it was fun to hear all the descriptions of my home. My only complaint was the narrator gave all the Texans a Georgia accent 🙄. All Southern accents are NOT the same. Texans do not sound like the characters in this book.

I love this story, history, mystery, romance and so much more. Carol Goodman is amazingly detailed and every story weaves its own magic spell. Audible needs to get every Goodman story in their catalog. Nothing she writes ever disappoints.

I wish I could write a review. But I cannot because I am crying. This is beautiful it is written well and is narrated well. I would suggest that anyone with an interest in classic mythology listen to this and remember we all come from the same source.

i enjoyed the story and the plot. Some day I am sure, I will listen to it again.

I love historical fiction and was hopeful that this would introduce me to a period of ancient history. The history is secondary to an obvious and not too interesting plot. The plot devices are clumsy and the "mystery" very unmysterious. The writing is mediocre, the characters shallow and predictable, and the plot reminded me of "bodice busters" without the good sex scenes. Some of the prose made me wonder if the author was kidding. I can't find my note but I think the line was " . . . her skin was as luminous as an unshucked oyster". Really?! The one star was in praise of anyone who writes a book.

What have I just read???

Ah, where to begin? I started listening to this book and I liked the beginning well enough. I've seen rewiews saying how stupid this book is, but I was thinking to myself that those critics are a bit too harsh, aren't they?
Sadly, at that time I came to the part of the book where Sophie leaves Texas and travels to Italy. And from there on, the story gets dumber by each page. Below you can find the examples:

1. The descriptions of Italy sounds like it is some third world country. Highlights of the culture seem to be limitless sources of cappuccino, mozzarella and tomatoes. When Sophie, our dear half-lunged heroine gets pneumonia, her American colleagues do not take her to hospital, they decide that they can take better care of her on their own (no doctor among them) . Italian hospitals are described as untrustworthy and only nuns seem to work there, no doctors or nurses.
2. It is clear that author has no knowledge whatsoever about Roman civilisation, especially about women's position in that culture. Same goes for the position of slaves.
3. Author has even lesser knowledge about archeological excavations. Everything she knows, comes from watching Indiana Jones. Once. Long time ago, when she was young.
4. Stupid southern accent of the performer is a big turn-off too. Yeah, I get it, some people in this book are from Texas. But when Phineas started to drawl words as 'hwite', and 'hwy', I just wanted to stick some smaller mozzarella balls into my ears in order not to hear. (This is a joke, of course, I have absolutely nothing against mozzarella).
5. Let me not even go into the cults and FBI part. It is simply moronic.

All that said, I kind of liked the happy 1st century ending. Because of that and because first part of the book was not that bad, I give it two stars. Wouldn't recommend it to anyone though.

Amazing story. Had me stumped about the villains for quite a while. A great combination of archeology, mythical gods, cults, and present day mystery. The narrative was okay. Narrator's accents could use some work.

hard to get into

very slow at the beginning and too much religious history for me. by the time I got into it it was done.

I'm usually a Christie fan, but I like Carol Goodman's writing. This is not one of her best, a bit Dan Brown for my taste, but still worth listening to. I preferred my reading - the accent wasn't so nasal in my head, but it's fairly enjoyable.

I hadn’t realised that this was going to be a chasing after antiquities conspiracy story. That would have been ok but the characters were cliched and had a habit of acting out of character and the whole diary thing, well sheesh. This book won’t harm anyone and if it’s your type of thing then, hey but it’s not good!

A mystery in buried Herculaneum

Just a little too long - but not much. Two storyline running parallel, one from modern day and the other from the AD 79 eruption of Vesuvius. The link is the villa della nocte of the title, partly excavated, and the search for ancient scrolls which might be preserved there.

There's a good mix of characters and credible scenarios and motives, a sufficiency of bones, a neat but satisfactory ending. Carol Goodman writes well, and the reading is good.