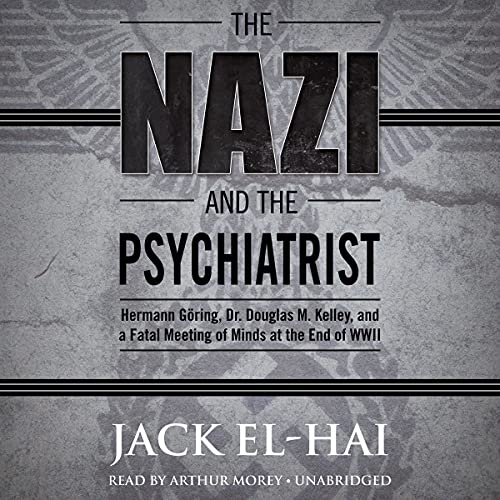 The Nazi and the Psychiatrist

In 1945, after his capture at the end of the Second World War, Hermann Göring arrived at an American-run detention center in war-torn Luxembourg, accompanied by 16 suitcases and a red hatbox. The suitcases contained all manner of paraphernalia: medals, gems, two cigar cutters, silk underwear, a hot water bottle, and the equivalent of $100,000,000 in cash. Hidden in a coffee can, a set of brass vials housed glass capsules containing a clear liquid and a white precipitate: potassium cyanide. Joining Göring in the detention center were the elite of the captured Nazi regime - Grand Admiral Dönitz, armed forces commander Wilhelm Keitel and his deputy Alfred Jodl, the mentally unstable Robert Ley, the suicidal Hans Frank, the pornographic propagandist Julius Streicher - 52 senior Nazis in all, of whom the dominant figure was Göring.

To ensure that the villainous captives were fit for trial at Nuremberg, the US Army sent an ambitious army psychiatrist, Captain Douglas M. Kelley, to supervise their mental well-being during their detention. Kelley realized he was being offered the professional opportunity of a lifetime: to discover a distinguishing trait among these arch-criminals that would mark them as psychologically different from the rest of humanity. So began a remarkable relationship between Kelley and his captors, told here for the first time with unique access to Kelley’s long-hidden papers and medical records.

Kelley’s was a hazardous quest, dangerous because against all his expectations he began to appreciate and understand some of the Nazi captives, none more so than the former Reichsmarshall, Hermann Göring. Evil had its charms.

What listeners say about The Nazi and the Psychiatrist

Amazing story, should be compulsive reading in all high schools. Do yourself a favor download this one and listen carefully. We must never allow this history to repeat.

I had just finished listening to Ian Kershaw’s The End: Hitler's Germany, 1944-45 which documented how the Germans continued to do evil even when the end was near. This book takes that question one step further and attempts to answer the 'why'.

I can highly recommend this book! I suggest you also listen to it at the same time as Ian Kershaw’s work (mentioned above)

There has also been some comment regarding the narration on this title. Please don’t let that turn you off. I found the narration good. A couple of times it sounded like German names were edited in later. But it was nothing to drastic. It can easily be listened to at 1.25x speed without any problems.

I couldn’t put this one down and listened to it one day!

I Don't Understand The Complaints...

leveled at this brilliant narrative concerning unnecessary length and lack of structure. As to the first, I wanted more, not less! I found the book remarkably compelling. As to the second, a stirring and intriguing story should not read like a sixth grade history book, but rather something like a novel. El-Hai accomplishes this wonderfully well here, weaving in and out of plot-lines, developing characters richly and fully along the way. This historical narrative is not nearly so much about Goering--or Kelley--as it is about those incredible accidental meetings of personalities and circumstances at the most telling times in history and how much of what becomes cultural consciousness is developed in dark rooms under conditions and by people of which most remain forever unaware. El-Hai's book is a mystery and suspense tale, told as though Poe or Hawthorne had penned an historical drama. It comes highly recommended from these quarters, especially for anyone who prefers a literary turn put to what would otherwise be dry classroom facts.

Not much insight,but still interesting

I don't feel this book offers much insight into what made these Nazis tick. Still the story of their imprisonment and interaction with others is very interesting. Would have been nice if Kelly and El-Ha I at least read some biographies on Hitler and Goering. For example Kelly would have known Hitler mentioned shooting himself on more than a few occasions over the years.It's a disgrace to have such wrong information on Goerings first wife, who was so important to his career. Kelly is an interesting character but not that interesting. Too much time given to him and his family. Narration is good.

Informative but a little dry ..

When I started reading this book, I was expecting a riveting history of two men engaged in a do or die mind duel to elaborate on the Nazi psychology. Instead, the book dryly details the psychological testing carried out by Captain Douglas M. Kelley on the Nuremberg defendants over a 6 month period. In this particular case atleast, history was not that colorful or enjoyable.

In a positive note, there is still much to glean from the interaction and discourse amongst the various criminal parties concerned. I particularly enjoyed the background on top Nazi officials and their demeanor living in their cramped prison cells. Their conversations between themselves as well as with the US military personnel are truly fascinating. There is no doubt, that the stress on these men must have been immense as the trial began.

A fair amount information is provided on Goring who is the most bombastic figure within the party of 22 defendants. He is without doubt the master manipulator and the author clearly wonders if Kelly himself was manipulated during his research. Nevertheless, Kelley went onto publish his works after returning to the US postulating that there was no specific human trait that drove the Nazi mind. Frighteningly, he concluded that any one of us could become a Nazi of the future.

A disturbing fact remains that Kelley seems to have borrowed or even stole his colleagues work during the time they both worked at Nuremberg. Kelley himself was a strange figure and suffered from mental illness which ultimately led to his suicide following Goering’s exact steps.

Recommend for the history buff!

I very much enjoyed this book. It was very captivating and well-written. A must-read for folks interested in learning more about the Nazi leadership, and their motivations.

A good book in search of an editor

This is not an easy review to write as I dont want to spoil this audiobook for the listeners to come.

This is an eight hour audiobook that should be only six hours long. The portions of this book dealing with the notable nazi leaders and the Nuremberg trials of 1946 are exceptional. This is not a book about the war crimes of the accused but rather an attempt as portraying the men
( mostly Hermann Goring ) clinically.

The main psychiatrist, Dr. Douglas Kelley, tries to locate "the nazi gene" that these defendents share that would possibly help in preventing such nazi horrors from reoccurring. Hermann Goring, the senior most nazi in custody, is also the most flamboyant personality. It is Goring that commands much of Kelley's attention. As the book progresses, both lives become inter entwined.

Where the book loses it is the two plus hours of the book that deals with Kelley's post Nuremberg life. Can anyone out there actually get excited about the personal life of a psychiatrist? I couldnt

If you buy this book, skip the last two hours

I would recommend this book if you are interested in the life of Dr. Douglas Kelley but not if you are hoping to read a book that takes an in-depth look at the life of Herman Goring from the perspective of a psychiatrist. This is a book more about Dr. Kelley and much less about his interaction with Goring and the other Nazi war criminals at Nuremburg. I feel like I was deceived into purchasing this book.

What does Arthur Morey bring to the story that you wouldn’t experience if you just read the book?

I really liked his smooth delivery and his soothing voice.

I was disappointed by the content but not by the performance.

Would you listen to The Nazi and the Psychiatrist again? Why?

No. Once was enough

Which character – as performed by Arthur Morey – was your favorite?

This was a good look at the sick minds of the Nazi criminals. Narration was great.

I found this book fascinating...it tells a very indepth story of the Nuremberg trials...much of which I knew nothing about.
One small cavil..Chapter 2 told me more about the author’s family and background than I really wanted to know..

NAZI criminal story with a twist

I love author Morey and excellent narrator one of my favorites. If you think you've heard all the auto books and booked you can about nazi crimes and the Holocaust. Listen to this one. It puts a twist on at telling about the psychiatrist that treated the Nazis his similarities with them and their findings. Very interesting highly recommended