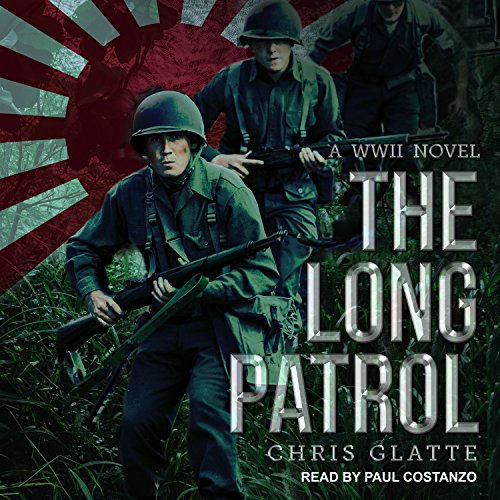 The Long Patrol: A WWII Novel

By: Chris Glatte
Narrated by: Paul Costanzo
Try for $0.00

During the bloody battle for Guadalcanal, one Army unit's mission to infiltrate enemy lines to arm and train a guerrilla force of natives goes horribly wrong.

The 164th Army Division has come to reinforce the beleaguered First Marine Division, which has been fighting the Japanese for months. It will be the Division's first combat test as well as it's bloodiest.

The fighting has come to a standstill with neither side giving ground. The 164th is desperate to break the stalemate and the mounting casualties.

Their possible solution comes in the form of a British Coast Watcher. Thomas Welch offers to take a small unit into the jungle to meet up with a force of natives to instigate a guerrilla war against the Japanese rear.

A unit from Able Company is selected for the job. Each man's been battle tested, defending Henderson field from hordes of attacking Japanese. The mission goes badly from the outset and the unit is cutoff and desperate to continue their mission.

As the battle for Guadalcanal rages on, their mission changes. As more men fall, the likelihood of completing it is slipping away. Betrayed, alone and hurt, they find themselves as the only soldiers able to deliver victory from the jaws of defeat.

What listeners say about The Long Patrol: A WWII Novel

Unrealistic Characters
Poor Research
Insipid Dialog
Non-historical events.
If you have any familiarity with the history of WWII, this book will disappoint you. Reread something better.

Excellent story and narrator. I've read and listened to many WWII stories, fiction and non-fiction.

the reader was mmmaaa mmaaa to ok. the story itself was good but needed better narration.
wish they had more of this series in audio.

couldn't stand the first 5 minutes
and the narrator was awful
I want to return it and get my money back. at 72 I find the navigation to do that very difficult

Why the hell did the baby have to die you idiots with a sick mind.

The Long Patrol, room for improvement

The story was compelling, however all the cursing and swearing was a turn off, author could easily have expressed the characters emotions in much better ways.

Thoroughly enjoyed every minute of this book. Great combat and characters. Can’t wait till the rest of the series gets put on audible!

A wonderful portrayal of courage and fortitude.

Gritty story of Pacific fighting. Thank descriptions of the fighting was vivid and concise in detail .
.