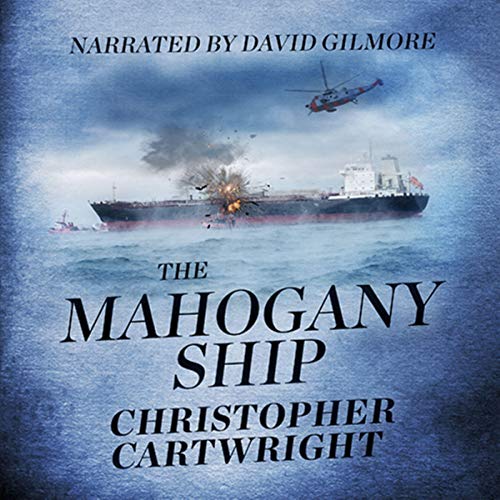 An ancient shipwreck. A 200-year-old mystery. A plague that's destroying all marine life. A pyramid half a mile below the sea. And a puzzle that must be solved before it destroys the human race.

On the 18th of February, 1812, the Emily Rose became shipwrecked on the southern coast of Australia. The survivors are forced to walk nearly 1,000 miles through the unexplored land to reach the only settlement, Sydney Cove.

Nearly 200 miles inland, they come across the remains of a monstrous ship, far bigger than anything the British Navy had ever constructed. Through basic communication achieved with the natives, they learned that the ship had been there for a very long time...Maybe 1,000 years? Despite the details of the mysterious ship in the journals from the survivors of the Emily Rose, no evidence that the Mahogany Ship ever existed was found - until now.

Present day: A mining exploration in Australia takes a core sample 500 feet below the surface of a deserted mountain. The sample returns no evidence of gold deposits, but something much more valuable - a single Spanish Gold coin, dated 1518. Could the origins of this coin finally reveal the existence of the fabled Mahogany Ship?

At the same time, Sam Reilly and his team of ocean investigators are exploring the cause of a widespread death of sea life within the Gulf of Mexico. In a race against time to stop the irrevocable destruction of the world's marine life, the two mysteries may just be entangled, and failure to solve them both will result in the greatest threat to ever face the human race.

What listeners say about The Mahogany Ship

Where does The Mahogany Ship rank among all the audiobooks you’ve listened to so far?

Better then average with plot twists some fun and a great deal of mystery.

What other book might you compare The Mahogany Ship to and why?

I enjoyed having a two for one deal............. two plots with different characters in a far away
destination.

If you could take any character from The Mahogany Ship out to dinner, who would it be and why?

'The Mahogany Ship' was a successful second book in the Sam Reilly series. This story is an Indiana Jones type historical thriller in that the action taking place in present day is very closely tied to what happened one hundred years ago in the same location. A complicated and juicy mystery, 'The Mahogany Ship' is a satisfying Clive Cussler type novel that delivers lots of action, compelling characters and treasures you will want to see uncovered. David Gilmore brings the story to life and gives a good narrative performance.

This book is a standalone listen and part of a series. I really enjoyed this book with all of its twists. I loved the historical element in the story as well. David Gilmore did a great job with performing the various characters in this book. The imagery was great too! I requested this review copy audiobook and have voluntarily written this review. I will definitely listen to more books by this author and narrator. Without giving away spoilers, I loved the ending in this book. Kudos to Christopher Cartwright for such a great story and creating Sam Reilly.

What one gold ducat inspires!

This tale is full of multiple legends, myths, an oceanic catastrophe in the making, a Mayan pyramid where you wouldn’t expect one, and all linked to Sam Reilly’s favorite subject; the Master Builders. The story has Sam chasing clues from the Gulf of Mexico to Australia to China and back to the underground caverns of Australia. Cartwright mixes historical fiction with fantasy embellishment and I find his writing enjoyable and interesting. This story does have some abrupt about-faces regarding the current direction of the hunt but I take it in stride and enjoy the action. I was given this free review copy audiobook at my request and have voluntarily left this review.

I was given this free review copy audio-book at my request and have voluntarily left this review. This review is for the audio copy of The Mahogany Ship - Sam Reilly, Book 2 by Christopher Cartwright and narrated by David Gilmore. Book 2 continues the adventures of Sam and Tom and company. This was very entertaining with lots of adventure and mayhem. David is consistent with his superlative narration.

I'm really digging this series and this entry was another plus. Fun characters on a great adventure. I will be starting the next book tomorrow!

This is a really fun series, my only complaint is the bad language picks up and starts throwing out f-bombs pretty early in the book and I personally have a really hard time wanting to finish it at that point. The story itself is great, I just wish the language was cleaned up. This story is right in line with stories like Indiana Jones but with more history which I absolutely love. The narrator does a great job and was a lot of fun to listen to.

This second book picks up not long after the first. Pretty good action. Nice plot line. I really enjoyed the characters. Narration is excellent as well. Ends on a bit of a cliffhanger but definitely looks like it continues into the next book.

Amazing! This book plays upon some of the plots opened during the first of the series while introducing some extremely thought-provoking new plots. I found myself so many times during the progression of this book questioning what I learned in school and just how many things mentioned in this book are based on truths that are not common knowledge. Non-stop action drives this amazing book and I can't wait to read the rest of the series.

Great story in the continuing adventures of Sam Reilly. I love the diving aspects of these books and the Indiana Jones meets Dan brown as the book twists and turns through historical and mythical themes. Great

All the elements of an entertaining adventure and a fun romp. I'm quite enjoying this series, so far. The narrator misses a nuance or three, but it didn't impact too much.

An ancient shipwreck. A 200-year-old mystery. A plague that's destroying all marine life. A pyramid half a mile below the sea. And a puzzle that must be solved before it destroys the human race.
great mystery book

A Great Mystery and Adventure.

An unputdownable mystery adventure novel. The writer knows how to keep the listener intrigued and on the edge of their seat. The characters are all wonderfully drawn for us and complemented by an excellent narrator. The story is full of twists and turns packed with incident and a little humour. I look forward to more in the series.

I think I can see the light

The Gulf of Mexico was rapidly becoming a Dead Zone, the marine life dead or dying, and it threatened to spread through all the oceans. The source of contamination was the leakage of hydrogen cyanide, sometimes used in gold mining, apparently coming from an underwater tunnel. Multi millionaire and explorer, Sam Reilly and his friend and co-worker, Tom, dive to find the source of the leak and stop it and, in so doing, accidentally discover what appears to be a magnificent unknown Mayan temple and tomb. How had it come to be there, huge and with such incredibly detailed work, so far beneath the water? But before he has a chance to explore further, Sam is asked by another billionaire to join an expedition looking for the fabled Mahogony ship, an artifact Sam and his father had sought without success when he was a youth. Leaving the exploration of the temple to Tom, Sam sets out for Australia.

The book follows the ongoing stories of both explorations. Filled with visual descriptions of the sites and growing supposition of possible histories, the story is packed with excitements and near death scenarios. This reader would have preferred more concentration on the first found Mexican discovery, which seemed to hold far more mystery, but it is the search for the legendary ship which leads to the final, rather disappointing denouement. Easy to read, and very well narrated by David Gilmore, whose pleasant voice has nice pace and good intonation in addition to great individual character voicings, this was an enjoyable, if somewhat unbelievable book in it's latter stages.

My thanks to the rights holder of The Mahogony Ship for freely gifting me a complimentary copy, at my request, via Audiobook Boom. The exciting story combined with a fine performance by the narrator made this pseudo archaeological tale well worth reading by anyone who enjoys this genre.

I received a free copy of this audiobook in return for an honest review.

I am a massive fan of Clive Cussler and Matthew Reilly and as such I enjoy the idea of myth and history combining together with a heavy dose of adventure. I am pleased to find that the author of this book is as skilled at the adventure side as he is at the history and myths.

As this is the second of the series there are a number of references made to the previous adventure Sam and his friends are in, including a live interest. However this does not impact the complex story, the characters or the thrills. I love the descriptions at the being of the novel and the introduction of the characters as if you had never met them before.

The narrator was good, fluent and did his best to differentiate between the sexes and the accents, but to be honest I was so hooked by the story that I barely noticed the voices. This is a good indicator of a great narrator for me, one that doesn't impose on the story but enhances it.

I've already looked to see if there is another book, which is promised at the end of this story and I look forward to listening to it soon.