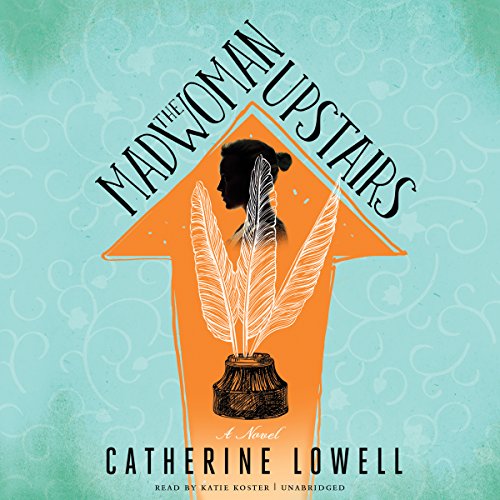 By: Catherine Lowell
Narrated by: Katie Koster
Try for $0.00

In Catherine Lowell's smart and original debut novel, the only remaining descendant of the Brontë family embarks on a modern-day literary scavenger hunt to find the family's long-rumored secret estate, using only the clues her eccentric father left behind and the Brontës' own novels.

Samantha Whipple is used to stirring up speculation wherever she goes. Since her father's untimely death, she is the presumed heir to a long-rumored trove of diaries, paintings, letters, and early novel drafts passed down from the Brontë family - a hidden fortune never revealed to anyone outside the family but endlessly speculated on by Brontë scholars and fanatics. Samantha, however, has never seen this alleged estate, and for all she knows, it's just as fictional as Jane Eyre or Wuthering Heights.

Yet everything changes when Samantha enrolls at Oxford University and long-lost objects from the past begin rematerializing in her life. Her father's distinctive copy of Jane Eyre, which should have perished in the fire that claimed his life, mysteriously appears on Samantha's bed. Annotated in her father's handwriting, the book is the first of many clues in an elaborate scavenger hunt derived from the world's greatest literature. With the help of a handsome but inscrutable professor, Samantha must plunge into a vast literary mystery and an untold family legacy - one that can be solved only by decoding the clues hidden within the Brontës' own writing.

For listeners who devoured The Weird Sisters and Special Topics in Calamity Physics, The Madwoman Upstairs is a suspenseful, exhilarating debut by an exciting new talent who offers a moving exploration of what it means when the greatest truth is, in fact, fiction.

"Koster's impressive emotional range captures Samantha's complex personality. She flawlessly portrays the girl's cheekiness as a cover for embarrassment and insecurity and perfectly captures her other emotions... Using an expressive, relaxed style, Koster connects listeners to the fun of Samantha's adventures." (AudioFile)

What listeners say about The Madwoman Upstairs

What made the experience of listening to The Madwoman Upstairs the most enjoyable?

The story is PERFECT. I identified so much with the protagonist. It's hysterical, heart-warming, a mystery, and you straight-up LEARN so much about literature/the Bronte sisters/reading. Also, Katie Koster is SO GOOD at narrating this, I literally have listened to this audiobook 5 times in the past year (got it on CDs from the library, but used my credit to listen to it a fifth time....)

Intelligent, witty, charming, thought provoking. Ms. Lowell's courage in taking on the Brontes was worth it. Wonderful character development. Samantha's outlook on life, literature, family and herself made me laugh out loud.

I loved this book, the youthful and whit of the main character Samantha and the storyline captivated me from beginning to end, loved it!

Samantha Whittle with her unexpected dialogue.

What does Katie Koster bring to the story that you wouldn’t experience if you just read the book?

Who was the most memorable character of The Madwoman Upstairs and why?

You don't have to be a Bronte fan to find this listen mesmerizing. Intelligently written and narration is perfect. I loved the aura of Oxford and the depth of the eccentric characters.

What a smart, fun read.

What an enjoyable book.

Author Catherine Lowell is clearly well steeped in English Literature. She offers what appears to be authentic discussions of both approaches to English lit, and to history of and/or opinions of the Brontes in a way I had never heard. The writing was effortless, transparent. The characters, seem real, living, ready to leap off the page.

The characters themselves are funny and engaging. You get to know a variety of them throughout the book. I really liked them, well most of them. The repartee between professor and student was audacious, bright and often hilarious. Samantha’s asides to herself, and others made me laugh out loud, even while thinking about what she was saying.

Life and learning at Oxford was another character in this plot. The history and learning style and rules of the place figured. They explained and propelled the story in a way that was so smart.

The narration Katie Koster was terrific in her various voices. The characters, the nuances of their speech, and accents are spot on, and much a part of the enjoyment.

The performance over all was spectacular.

I did not want this book to end, and looked (not to find) another book by this author.
I gave this book five stars across, recommend this highly and would suggest that if you are thinking of it, get it.

This book has made me want to read more and read everything. I wish I had the time.

I got this book because I thought the story sounded interesting and I was willing to take a chance in it, fully prepared to be utterly disappointed. I. Was. Not. This is a charming story full of memorable characters and a somewhat lighthearted mystery. It was well-written (despite some odd Anglo-Ameri phrase discrepancies (although told from the perspective of an American, some of the phrases she uses are very English so I was a little confused by the author's choices there), and well-performed. There were one or two atrociously mispronounced words but nothing that really rendered the book unlistenable. I would recommend this book to almost anyone.

Written for Teens? Too arch, cutesy and twee

The Madwoman Upstairs has an interesting set up, but the delivery is completely mistaken.

Our narrator is supposed to be a superstar English Lit. student from the U.S. entering the fictional Old College at Oxford. She is presumably highly intelligent and articulate because she beat out the competition in order to get into what is said to be Oxford's premier college.

From the evidence, however, our narrator seems to be about 13, a surly child with a bad attitude and not much imagination or wit. For example, when asked by her Tutor - the person who will determine whether she succeeds or fails at Old College - about her favorite authors, she clams up, refuses to speak on the subject, but invites him to name some for her. Incredibly, he doesn't throw her out, but starts naming eminent authors, all of which she shoots down with monosyllabic replies, no, maybe, etc. It leaves you wondering how it is you got stuck with a graphic novel without the pictures. Not deathless prose, not even mildly credible.

This novel is sort of like Southern iced tea, pre-sweetened to the point of inducing diabetic coma. It is precious to a fault; its characters are cardboard mannikins set up to deliver t.v. sitcom style soundbites so that the laugh track can play in the background.

Add to that a narrator who doubles down on the juvenile irony and sarcasm littering the text and you have a disaster.

Main character is unbearable and self absorbed

I was unable to finish this for two reasons , one the unbearably self absorbed main character. She's too modern for classic literature ...she bemoans her relation to the Bronte sisters , and whenever she's speaks to some she automatically assumes that all anyone cares is about is asking about her famous relatives . Also for some reason she decides to major in English lit , which she clearly hates . After about half an hour of this I wanted to tear my hair out .
Secondly the story just dragged on with few truly important scenes . All we want to know about is the mystery not Sammy being a self obsessed brat ! 🤦😬🙄

This is not a type of book I usually read (listen to) but it sounded interesting and did not disappoint!!