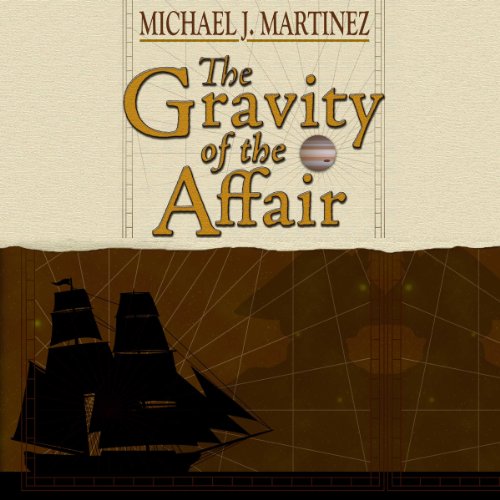 The Gravity of the Affair

Before his victory at the Nile. Before his scandalous personal life made headlines. Before he crushed the French and Spanish fleets at Trafalgar. Before he died a martyr. Horatio Nelson, England's greatest naval hero, assumed his first command, the 12-gun brig HMS Badger, at the tender age of 20.

History tells us his first voyages as captain were unremarkable. Yet in the Known Worlds, where sailing ships ply the Void and the mystic science of alchemy works wonders, Nelson's first command goes quite differently. With his brashness and emotions untempered by experience, Nelson's rash actions as captain of the Badger threaten his heroic destiny. The Gravity of the Affair is an audiobook set in the Known Worlds of The Daedalus Incident, with events that tie into the audiobook (though both works may be enjoyed independently of one another).

What listeners say about The Gravity of the Affair

A must for MJM Fans

If you've already read the other books in this series, then what's stopping you from reading this one.
If you've never been to the universe where ships sail on water and in the void, then this makes for a very nice introduction to the series.
The performance is flawless, like the other books.
I'm so glad I found these books when Mr. Martinez was still writing them. I can't wait to read more. What a talent!!

Not for me, sorry I only got as far as the first couple of sentences, the storyline was too far fetched, mixing the eighteenths century royal navy with space travel was a step too far, with sailing ships sailing through space. Even in my limited time hearing the story there was a couple of ‘errors’ in the stories regarding the navy and Nelson’s rank, this excludes sailing ships in space.