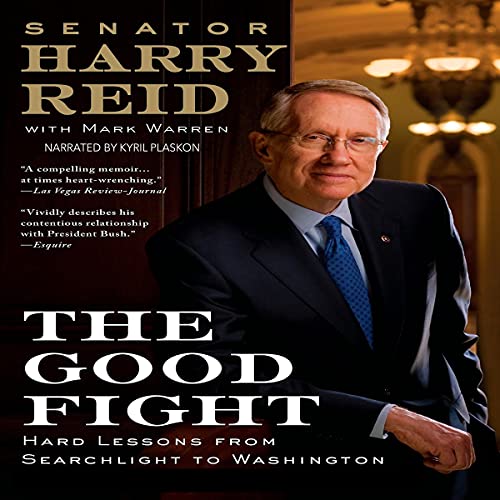 The Good Fight: Hard Lessons from Searchlight to Washington

By: Harry Reid,Mark Warren
Narrated by: Kyril Plaskon
Try for $0.00

The mob, billionaires, presidents, political maneuvering, and war. This is a tough, plain-spoken, deeply passionate narrative by one of our most important national figures. So many politicians' books read as though they've been cobbled together from old speeches. The Good Fight is as far from that as it is possible to get. It is the story of a man who knows what a good fight is because he has had to fight like hell for everything his whole life.

It is populated by the rich and raucous cast of great and failed men, eccentrics, visionaries, gangsters, and presidents who make up his life and times. And it is for all those who not only like a good story but wonder what we should do now in America. In a voice that is flinty, real and passion-filled, Senator Harry Reid tells the tale of two places, intertwining his own story, particularly his early life of deep poverty in the tiny mining town of Searchlight, Nevada, "a place that boasted of 13 brothels and no churches", with the cautionary tale of Washington, D.C.: "If I can do nothing greater in this book than explain those two places to each other, then I will have done something important".

He is inspired by obstacles. Raised in a cabin without indoor plumbing, he hitchhiked 45 miles across open desert to high school. He worked full-time as a Capitol Hill policeman to get through law school, after the school refused him financial aid, telling him he wasn't cut out for the law. As head of the Nevada Gaming Commission, he led an unrelenting fight to clean up Las Vegas, despite four years of death threats and much worse. And in Congress, he's spent more than 25 years battling those who would take the country in the wrong direction: "The radical ideologues degrade our government, so much so that when they are in charge of it, they do not know how to run it". And always, it all comes back to Searchlight: "Who I am now, and what I am doing now, began in that town, with those people in those mines".

What listeners say about The Good Fight: Hard Lessons from Searchlight to Washington