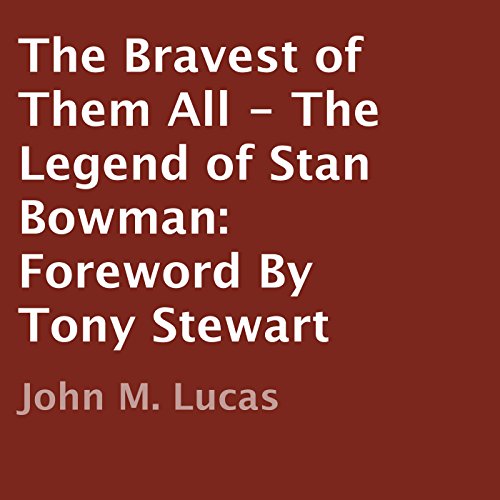 The Bravest of Them All: The Legend of Stan Bowman

This story describes USAC sprint car racing in the early 1960s and a driver named Stan Bowman. It captures Bowman's win at the first USAC sprint car race at Eldora Speedway in 1962. Bowman also captured the attention of Clint Brawner, the legendary Indianapolis 500 mechanic of that era. The story is told through the eyes of Diane Beck Lane, who was daughter of Harold Beck, the owner of Bowman's race car at Eldora in 1962. In 2012, Eldora Speedway, now owned by Tony Stewart, honored the 50th anniversary of Bowman's victory and Diane Beck Lane now retells the legend of Stan Bowman in the golden era in USAC sprint car racing.

What listeners say about The Bravest of Them All: The Legend of Stan Bowman

Would you listen to The Bravest of Them All: The Legend of Stan Bowman again? Why?

Absolutely, this is one of those stories that makes you wish you could have been there, and at the same time makes you feel as if you were there!

What was one of the most memorable moments of The Bravest of Them All: The Legend of Stan Bowman?

Which character – as performed by Heidi Mattson – was your favorite?

Yea and I absolutely did, more than once.

This is an inspiring story that is written is a way that anyone; sports fan or not, you will enjoy this great book!