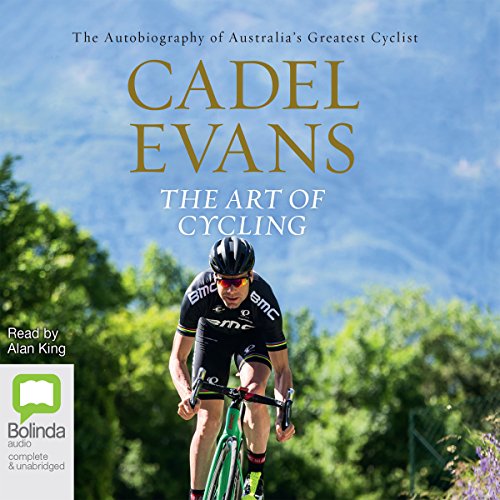 The Art of Cycling

The autobiography of a cycling legend that will become a much-loved classic.

The much-anticipated autobiography of the greatest Australian cyclist of all time. Famous in the sport for his meticulous preparation and an athlete who prided himself on his ability to leave it all on the road, Evans writes about the triumphs, the frustrations, the training, the preparation, the psychology of the sport, his contemporaries, the legends and his enduring love of cycling. A riveting and forensic account of his life on the bike - from his beginnings as the youngest winner of a World Cup in mountain biking to the oldest post-War winner of the Tour de France.

One of only four cyclists in the world to have finished on the podium of all three Grand Tours (the Tour de France, Giro d'Italia and Vuelta a Espana) as well as winning the UCI Road World Championship, Cadel's autobiography is a tribute to a once-in-a-lifetime sporting talent. This book will put you on the bike alongside Cadel as he recounts the races and the moments that mattered - as he places in the top 10 in six Tours de France and becomes Australia's first, and only, Tour de France champion and first, and only, Road World Champion. Be there on the road as he claims the points jersey at the Giro d'Italia and as he wins some of the world's greatest races - the Tour of Austria (twice), the Tour de Romandie (twice), the Settimana Coppi e Bartali, Tirreno-Adriatico, Flèche Wallone, the Criterium International and the Giro del Trentino.


Hey, cyclers! If you’re looking for a listen to motivate and energize you while you head out on a ride, these audiobooks are sure to get you pumped up. But whether you decide to listen on or off your bike, this list was curated especially for you. As the summer heats up, you might be looking for motivation to get out there on your bike and onto the streets—or maybe you’re plenty motivated already and just need tips and tricks to up your cycling game. Find the best cycling audiobook for you in the picks below, whether you’re a lifelong rider, a newbie, or any skill level in between.

What listeners say about The Art of Cycling

A Favorite For Sure.

I love this book. It is probably one of the easiest books I've ever listened to, strangely enough. The story is engaging, and I feel that Cadel Evans really put his heart and soul into it. I feel like I'm there when he is riding in the Tour de France. I listen while I walk my dog, so when I come home I turn it off. Well, I can't wait for the next walk.

Whether you are a cyclist or an enthusiast, you will become more engaged in cycling by listening to this book. I can't wait to get back on the road again.

Great story from someone with great character.

Long read, covers the entire race career and his thoughts through the experience.

Wish story had some workout details for physiology geeks, but I really enjoyed story. Nice flow to it

A peek inside a professional's brain

As I find my passion for cycling at 40, I picked you this book to get to know a professional cyclist's perspective into this world. His world. And I was not disappointed. This book is a very detailed read into the racing elements of Cadel's life and he goes through every win and pain in detail. Sometimes I wished he would stop complaining so much - but that was his life. He felt cheated and abandoned in those moments and was able to write about them well enough to transfer the emotions onto me. Overall, a good but slow read.

Didn't used to rate Cadel much,

Didn't used to rate Cadel much, a champion in the middle of all the busted riders of the time. But this made me realise what a great guy he is.
The narration is irritating in its mispronunciation of all Italian towns, expressions etc. please audible. Pronounce them correctly or everyone will be more ignorant, hence my 2 stars for the performance

A long journey from outback Australia to the Champs-Élysées. I very much enjoyed Cadel’s story. A natural talent on the bike, but it’s clear that Cadel’s drive, focus and dogged determination is what set him apart from other athletes at his level. Very candid. Highly recommended.

Cadel has an amazing story

What does Alan King bring to the story that you wouldn’t experience if you just read the book?

He has the Australian accent. I feel like Cadel's talking to me.

for cycling fans, a great listen

Would you consider the audio edition of The Art of Cycling to be better than the print version?

Sure, it's long, but I didn't find it tediously long at all. The length gives Evans the opportunity to tell the story of his professional riding career in detail. Without that detail, I do not think the book would be nearly as good. Do you have to be a cyclist or cycling fan to enjoy this book? Probably. It IS, after all, a book about cycling (and a very detailed one at that!). But the book itself is pretty great. It's not a work of timeless literature. There are times when the writing is a bit cliche.But it is certainly well written, and Evans comes across as a thoughtful, sincere person with a true passion for his profession. He is also very fair to the many other cyclists (and non-cyclists) that we writes about in the book. There are no grudges, there is no defamation, yet he is candid and honest about his feelings toward and about others. I really learned a lot about professional cycling, also, which was a nice bonus. And, of course, the sections about the races themselves are fabulous.Highly recommended for cycling fans! Thanks, Cadel!

Best book I have read/listened to, loved it

Cadel always come across pretty cold and closed in the media but in this book, he really opens up about his whole life. From growing up and riding his bike to winning the tour and becoming world champion. It also gives a great insight into the life of a pro cyclist. Travelling the world, racing and training in whatever the weather is. Fascinating and very interesting.

Enjoyable listen and good insight to the TdF

Enjoyed listening to this book and reflects the hard work & effort required and desire to win the big races.

Showed me a new side to Cadel, and the difficulties faced by non European pro cyclists, as the sport is based largely in Europe.

loved it, loved listening to the amazing stuff that's happened in his life of cycling and beyond..

Thorough, insightful, interesting: just about as inspirational a cyclist as it is possible to be, with none of the introvert self-publicity of most riders’ biographies.

I enjoy cycling books and listening to this book from Cadel Evans is essential for anyone wanting the full picture of the sport over the early 2000s. The book reviews Evans’ entire career in fairly short order so there are lots of short reviews of different races. At times it is almost like listening to someone read out a long list of achievements (of which there are many). It can be a bit repetitive.

Hearing about cycling from Evans’ perspective is interesting because he took a very strong anti-doping stance in an era when many have since admitted to doping.

Where the book is a bit disappointing for me is the lack of emotional insight into Evans. He is clearly a very private person and this comes across. There are things happening that you would think would cause great emotion - like being beaten in a race by a known / suspected doper. Evans doesn’t come across as having any great fury for that - perhaps it is best that way!

Evans spends a lot of time discussing his various teams. It is interesting to hear how different teams are structured in different ways. There are some stories that beggar belief, for example the team not letting him use decent time trial wheels at the TDF where he came second by only a few seconds - the implication being if he had better wheels he might have won.

I've read a lot of cycling biographies and this is up there in the top 5. Beautifully read, engagingly written, and great length. I used to think CE was a stroppy diva as well as being a great cyclist but this boom has made me warm to him so much.

I've read most cycling books as I love the sport & Cadels to be honest, didn't jump out to me as "won't to read" however, as they say, never judge a book by the cover!! This is a great book & very interesting insight in to cadel & the pro ranks! Top draw