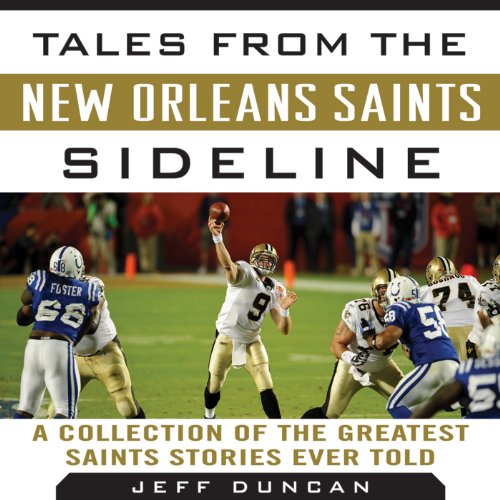 Recapture all the excitement of Saints football - newly updated!

The New Orleans Saints own a rich history that reflects the unique character of their hometown - always colorful, sometimes sinful, and utterly unpredictable. In recent years, the Saints have shaken off their reputation as the NFL’s lovable Fleur de Losers and have risen to become a dangerous gridiron competitor once again.

Despite the struggles of their early years, the Saints are adored and worshipped by their fans like few other teams in the league. Their die-hard followers are resilient, passionate, and eternally optimistic. In this newly revised edition of Tales from the New Orleans Saints Sideline, author Jeff Duncan chronicles the flamboyant history of the franchise, its highs and lows, the great coaches and players, and the colorful characters that have made it one of the most interesting clubs in NFL history.

Tales from the New Orleans Saints Sideline details the franchise’s journey from the bumbling early years under freewheeling owner John Mecom, through the misguided and madcap three seasons under Coach Mike Ditka, and the return to respectability under the fiery and headstrong Jim Haslett. Primed and ready to achieve the glory that has thus far eluded them, the New Orleans Saints have hundreds of stories to be told, and thousands of moments to share. Now fans will relive all the greatest triumphs and most devastating defeats, and get the inside story from former Saints greats like Jim Mora, Archie Manning, Morten Andersen, Pat Swilling, Drew Brees, and more.

What listeners say about Tales from the New Orleans Saints Sideline

The stories were entertaining. However, for an audio book about the Saints, where it would logically be expected that the audience would be comprised mostly of Saints fans and Louisiana natives, it seems obvious to get a narrator who can pronounce Louisiana proper names. I found myself enjoying the stories going all the way back to the inception of the Saints, but constantly distracted by the narrator's mispronunciation of names like "Thibodaux", "Fourcade", and "Antoine's".

The narrator obviously 1) Is not from Louisiana, 2) Didn't take the time to research pronunciation of proper names in the book, and 3) Not a football fan. The performance was stiff, awkward, and riddled with mispronunciations. In a book about Louisiana football, it would have been a much more enjoyable experience with someone who sounds more natural to the subject matter.

Saint's are an amazing team

I am a die hard Saint's Fan that has never had the opportunity to be in New Orleans or even set foot on Louisana soil. But listening to this book, I felt everything. The ups the downs, the momentum this audio book and the narrator took me on, I found myself cheering and jumping up and down as if I was really at the games. Thank you for giving me a history on my favorite football team ever and the only one. "Who Dat".

Great for a Saints fan, but full of errors

I lost count of the number of mispronounced names. It sounds like the narrator knows nothing about Saints' history. It would have been nice to have someone coach him on the proper pronunciations.

It's not necessary since the book is a series of small anecdotes.

I was also surprised by the number of factual errors in the book. The writer is a local sportscaster who has covered the Saints for years, but he often gives the wrong dates and occasionally a wrong name. One example is when he states that Chuck Muncie was the first Saints to rush for 1000 yards when he did so in 1980. In fact, that was in 1979. If he missed that date, how many others did he miss?