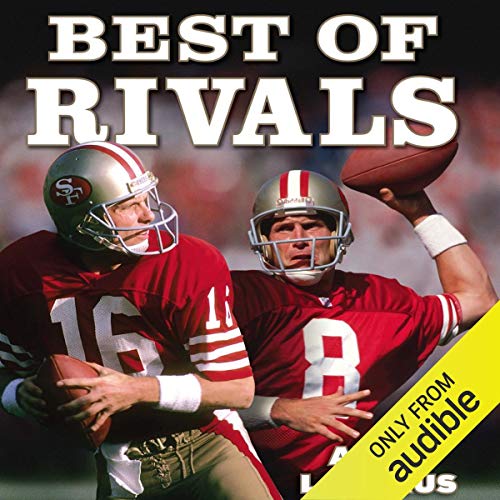 By: Adam Lazarus
Narrated by: James Conlan
Try for $0.00

In this revealing, in-depth look at the NFL's greatest quarterback controversy, Adam Lazarus takes listeners into the locker room and inside the huddle to deliver the real story behind the rivalry - when Joe Montana and Steve Young battled on and off the field and forged one of the finest football dynasties of all time. From 1987 to 1994, the two future Hall of Famers spurred each other on to remarkable heights, including three Super Bowl wins and four MVP awards, setting new standards for quarterback excellence.

The two men couldn't have been more different in background, personality, and playing style, and their competition created as much tension as it did greatness, forcing Montana to prove that he was still the game's best quarterback and Young to prove that he was a worthy successor.

Featuring candid interviews with Montana, Young, Jerry Rice, George Seifert, and many more, Best of Rivals brings to life the story of two sports legends, the golden era of football their rivalry presided over, and the amazing legacy it produced.

What listeners say about Best of Rivals

Excellent backstory of Montana and Young

As a diehard 49ers fan, I loved this story. It really shed some light on the QB controversy while providing tons of interesting facts and stats. My two criticisms are that it ended talking about a different team other than the 9ers, and at times it seemed to portray Montana as a bighead/villain. Other than those, this is a well-told, informative story for any NFL lover.

Great story, but the performance is a bit off. Pronunciations should match with the west coast. Ir wasn't too off, but on occasion certain words would throw me off.

Yes, it was a great history review and reveals that QB controversy has and even in recent years, still was a major part of 49ers history.

Would you recommend Best of Rivals to your friends? Why or why not?

Yes, but I would imagine non-49ers fans might not enjoy it.

Have you listened to any of James Conlan’s other performances before? How does this one compare?

No, no point since I watched the actual events which were far better than any movie.

Would you try another book from Adam Lazarus and/or James Conlan?

Would you be willing to try another book from Adam Lazarus? Why or why not?

I hated this book so much I couldn't finish it. It's NOTHING but scores and plays that you can get from any newspaper. I bet this author never once talked to any of these guys as the ENTIRE book is...."It was third down and 12 yards to go and the score was 41 to 17."
NO ONE wants stats, that are boring and worthless from years ago. The rivalry wasn't even talked about much at all except in passing nor were the main characters lives and how they grew up or how they think. Anyone can write this book sitting at a computer taking stats off other peoples work that is not one bit interesting. Some sports writers still don't get it and think TALKING about meaningless plays and scores makes a good read.
I still know next to nothing about Young or Joe and this was a waste of my time.

learned a lot about the rivalry here. well written and researched. want to read more.

it's a muddled story that has no soul to it. the narrator sounds dull too

this book is definitely worth listening to as it offers personal insight from both players on a memorable chapter of the forty niners history, just one tiny drawback was the narrator pronouncing lived as lie-ved.

Would you consider the audio edition of Best of Rivals to be better than the print version?

If you’ve listened to books by Adam Lazarus before, how does this one compare?

interesting read,full of information. It is a great performance by the narrator. Its like a mini auto biography of Joe Montana and Steve Young.