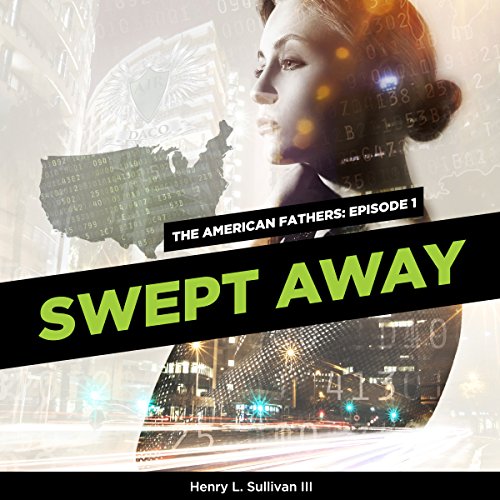 THE AMERICAN FATHERS EPISODE 1: SWEPT AWAY

Sheila is certain America's dynasties will destroy the country, but her nascent group of academic colleagues has failed to persuade the government and the people of the need for change. These revolutionaries call themselves Prime Heuristic. Their influence on government is small compared to that of powerful families like the houses of Daco, Harrington, Maddox, and Tafuri. Sheila and her colleagues monitor the fight for economic dominance between these four houses and America's other dynasties. Their influence upon politicians is indisputable. But even among the masses, dynasty wealth has its supporters, as expressed through the trendy fashion known as "dynasty style".

When Sheila meets Jasira, she doesn't know what to expect. The popular congressional correspondent is smart, attractive. Their connection is clear from the start, but Sheila finds herself wanting to know Jasira's real agenda. Does Jasira support the dynasties and their influence upon the government she covers? Or is she, like Sheila, working to turn the country away from contemporary feudalism and back to democracy? The full voice cast includes Fawzia Mirza and Scott Duff.

What listeners say about THE AMERICAN FATHERS EPISODE 1: SWEPT AWAY

maybe, The book was short and the story was a good start but I wish there was more about the new deal and the houses and less about the sexual tension between the characters.

Would you be willing to try another book from Henry Sullivan? Why or why not?

yes, I would like to give the next story a chance to see where it goes from here.

(I was provided with a free download to this audiobook in exchange for an honest review.)

An intriguing introduction to what looks to be an interesting series, "The American Fathers: Swept Away" is smart, attention-grabbing, and really well performed. In a near future where powerful dynasties and families have all but taken the place of the government, college professor Sheila is convinced that America needs to turn away from this modern feudalism, or be destroyed. Is the attractive Jasira her enemy, or an ally in the upcoming struggle?

I enjoyed this audiobook a lot. I'm far more used to single narrator audiobooks, and was a little sceptical about the mixed cast, but I ended up liking it a lot. It was really well performed, and everyone had lovely voices (especially the voice actress for Jasira, Fawzia Mriza). There were a few issues with pacing, where the narrator might come back in too soon after a bit of dialogue, but they're easily overlooked, and didn't detract from my enjoyment of the book at all. I sometimes find audiobooks difficult to follow without the printed version in front of me, but not in this case. Short as it was, I fell in love with the main character in record time, and I'm super intrigued about what follows.

A good book, and a really good performance; I'm probably going to get my hands on the others in the series when I'm able to. I'd recommend this for lovers of suspense, science fiction, and romance.

Set in a near future America, the world is a bit different. Powerful houses run the politics, and hence, the country, from behind the scenes. Sworn fealty to a powerful house can bring the average person a decent paying job in a world where society is scrambling to hold it together. Sheila, a smart lass from Tennessee, sees through this BS and is trying to open the public’s eyes to this power shift. Meanwhile, the Lebanese congressional correspondent Jasira agrees with Sheila, off the record. Yet, despite Sheila’s unarguable attraction to Jasira, she can’t help but question Jasira’s motives.

I stepped into this book thinking it was more near future scifi + politcs than romance + erotica. However, I couldn’t help but be caught up in the story. The author does a very good job of showing us, through Sheila’s eyes, the power structure and what Sheila believes to be wrong with it. The story opens with a hosted TV show on which Sheila and Jasira are guests. Through that show, they get to interact with a few members of the show’s audience, who have questions that leave the the door open for Sheila to comment on the politics of the day.

There’s only a touch or two of what you might call futuristic tech. Honestly, telling your sound system to play a certain selection of music is possible now with a swanky system. Still, it was nice to have these small reminders that this is a near-future story and not some alternate story of what Earth and politics might be today. I personally would have preferred a little more future tech.

This is a romance erotica and that part of the book is sweet. When Jasira turned on the charm, I melted. The sex scene doesn’t happen until the end and there is a very nice build up. We get a clear picture of who each of these ladies are – and they are both smart and savvy in their own ways. Plus there are those hints of hidden secrets and things rather not said for both ladies, giving the story that overtone of possible future conflicts of interests. By the time the sex scene arrived, I was thoroughly caught up in the characters and so wanted them to be happy with each other. The descriptions of the love making were detailed but not gauche. It was a very nicely done piece of erotica thrown into a larger story of political intrigue. As a side note, I really like that we have more than 1 ethnicity represented in this story. I will definitely be looking for episode 2.

I received this book at no cost from the author in exchange for an honest review.

The Narration: This was an excellent performance all around. Sheila’s character had a light regional accent that wasn’t overdone. The voice for Jasira was perfect – by turns clever and insightful, and then sexy and tempting. The rest of the character voices were distinct and well done. The production was smooth with touches of ambient sounds that never drowned out the dialogue.

I have never really gotten into audible books in the past but The American Fathers audible allowed me to use my imagination in deciding what the characters looked like and details of each scene. I really enjoyed it and looking forward to hearing more from The American Fathers series.

Narrated by a cast of five actors, The American Fathers Episode 1 is a short audiobook, 58 minutes. Sound effects are sprinkled throughout the prose. This combination, i.e., the length, cast, and sound effects, brought to mind radio mysteries. Well produced.

Both dialogue and narration are excellent. Snappy and authentic. The cast of actors does a terrific job in transitions with voices/characters. You’ll find a seamless reading and will have absolutely no trouble discerning who-says-what-to-who.

Although the story itself is short, the topic is intriguing. In a not-to-distant future, a very powerful movement will thrust the country into a haves and have-nots culture. Dynasties of enormous wealth call the shots and there are a few who see a future of unknown but certain failures of a catastrophic nature. Two women find their commonalities are deeper than their similar viewpoints and a predicable liaison ensues.

With The American Fathers Episode 1, a lot happens in a short time. Note this book is for mature audiences and is LGBTQ.

The quality of this work is very good. But, you may be disappointed in the brevity.

Too short but well performed

Would you ever listen to anything by Henry Sullivan again?

I wouldn't mind reading the series to see what happens with Sheila and Jasira.

They all performed very well. I especially liked Jasira's voice and Sheila's Tennessee accent. I liked the voice of the main narrator. Actually the whole cast was great.

I would watch if it made it to Netflix.

I received a copy of this audio book at no cost in exchange for an honest review. Would I be eager to hear the next installment if there was more political thriller content? Or more romance/erotica? I'm just not sure.

Audio is new for me but I thoroughly enjoyed the story. Different actors adds depth to the characters.