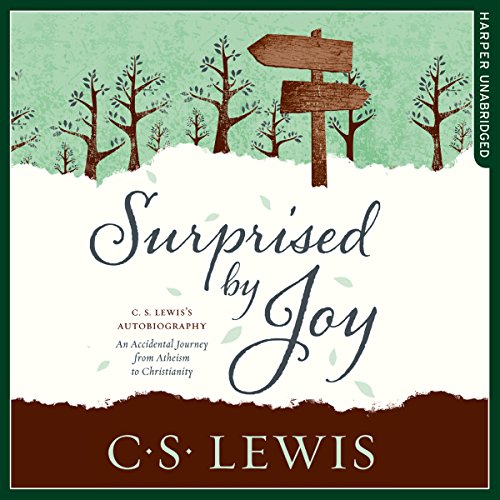 For many years an atheist, C. S. Lewis vividly describes the spiritual quest that convinced him of the truth and reality of Christianity, in his famous autobiography.

"In the Trinity Term of 1929 I gave in, and admitted that God was God...perhaps the most dejected and reluctant convert in all England." Thus Lewis describes memorably the crisis of his conversion.

Surprised by Joy reveals both that crisis and its momentous conclusion that would determine the shape of Lewis' entire life.

"He is admirably equipped to write spiritual autobiography for the plain man, for his outstanding gift is clarity. You can take it at two levels, as straight autobiography, or as a kind of spiritual thriller, a detective's probing of clue and motive that led up to his return to the Christianity he had lost in childhood." (Isabel Quigley, Sunday Times)

What listeners say about Surprised by Joy

A lot to digest

I enjoyed listening to tge story of Lewis's conversion and I thought it was well read. But I found it difficult to digest in this format. I would have got more out of it if I had read it myself.

Now that I come to write this review i find i can't remember how i found this book or why I decided to read it. I am glad that I did and I will again. At times it was a little difficult, not the writing but following a description of a time and class i know nothing about. The quotes in german,french,Latin and Greek although lost on me, didn't really spoil the story. I feel the narrator a perfect choice, his voice and tone are suitable to the era, also his emotion in the reading at times made me feel i was listening to an old radio broadcast of c.s. Lewis himself. A book I'll keep in my library to listen again and again to find the parts i missed this time.

impossible to put down, captivating, illuminating. i want to listen to it over again straight away.

A genuine pleasure to read .

CS Lewis' books are a genuine pleasure to read and this reader is simply outstanding. Highly recommended.


Appears that a boyhood obsession with Animal Land becomes in adulthood Narnia. Not fully biography yet glimpses of background to Lewis becoming a Christian, not a Damascene event but logical reasoning I hoped for more on his Christian life a sense of rushed final chapters. Good narrative voice.

An insightful book into the conversion of CS Lewis

Great narrator, love CS Lewis! A really insightful book into his conversion to Christianity. Would recommend.

The reader was amazing and Lewis' story of himself was riveting and inspiring. Highly recommended.

Enjoyed it very much

It is a long book but was must enjoyable.
The story is full of ups and downs.
Having not read any of C S Lewis before I am keen to read some more of his books

good insight on a journey of discovery.

lewis' knowledge and intellect shines through the words. a personal journey and historical document in one.

An interesting read but weighted strangely

Interesting book and enjoy all of CS Lewis's so far, however I felt the first half dragged on and the second could have been drawn out longer than it was

Sometimes I struggled with his academic mind and his fear of relationships. Even at the end of the book there was a sense I wanted to see if he had formed a deep relationship with Jesus.

Great but quality not great

Loved hearing Lewis’ story. Audio sounded as if it was skipping a lot so felt like I was missing chunks of story. Not good quality. I would try another version. Returning this one.

The narrator does a terrific job bringing this autobiography to life.

I was expecting the book to be more about the shift Lewis made from being an atheist to a Christian (as the subtitle indicates). Sure, this is certainly how the book ends with its closing chapters. Nevertheless, Lewis's conversion and the intellectual and personal experiences that led to this are much food for thought, and helped me to better clarify my own experience with faith and its relationship to life/ academia.

Loved it. Highly recommend it. His pursuit of joy, his insight into it, and discovery of its source in God is very compelling and very relatable.

Intriguing and poignant story, excellently narrated. Recommend for any deeper thinkers and those who appreciate C.S. Lewis's work.

Not an academic review

I really enjoyed this book. The way in which Lewis walks us through the seasons of his life that led to his discovery of faith is very interesting. I recommend this book to anyone who loves C.S Lewis and is interested in knowing more about the man who wrote the stories we've grown up with.

surprised it want about joy.

I may have missed something, but k feel this was more about CS Lewis' abuse in schools and kind of missed where the joy part came in. I was hoping for some string philosophy, but instead got a stream of events regarding childhood abuse.