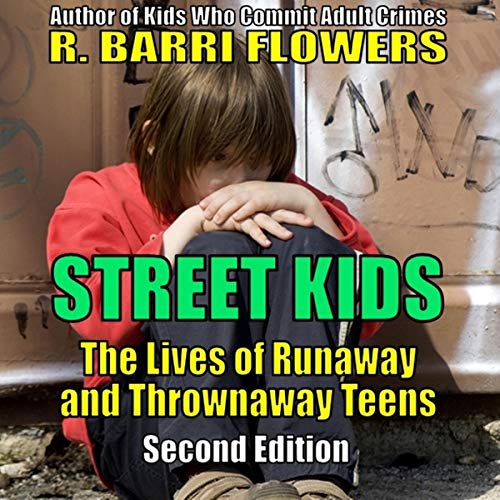 Street Kids: The Lives of Runaway and Thrownaway Teens, Second Edition, by award-winning and best-selling criminologist R. Barri Flowers, is an audiobook that examines the pathway from home to homeless for runaways and thrownaways, including precursors to life on the street, such as child abuse and neglect, sexual abuse, substance abuse, mental health, promiscuity, behavioral issues, and problems related to sexual orientation/gender identity.

Explored as well are the consequences of homelessness and vulnerable street kids, such as survival sex and commercial child sexual exploitation by pimps, customers, pornographers, pedophiles, and others who prey on minors; sexually transmitted diseases such as HIV, other health concerns, and violence experienced by runaway, thrownaway, and homeless youth.

The book will also discuss legal, law enforcement, and other efforts to curb running away and combat the victimization of runaway and thrownaway youth by sexual exploiters, perpetrators of violence, gangs, drug addicts, bias offenders, and other homeless or victimizers.

Street Kids will be a useful source for child welfare advocates, academics, professionals, sociologists, criminologists, researchers, laypersons, and others with an interest in the plight and mistreatment of children living on the streets or away from a safe home environment.

Includes bonus excerpts from other best-selling nonfiction titles by the author that addresses important current topics in society, such as crime on college campuses, serious criminality by youth, and prostitution in the digital age.