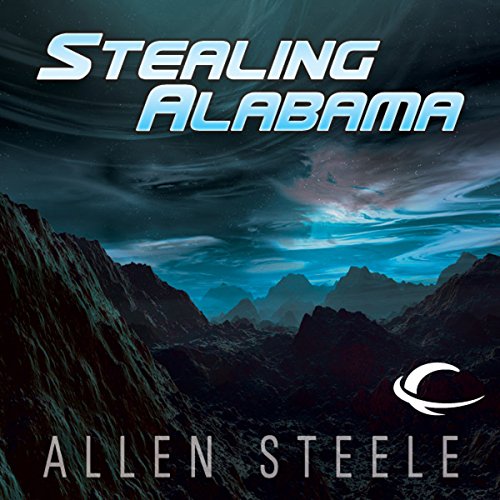 The second American Revolution has propelled the Southern-controlled United Republic of America into power, its oppressive laws enforced by the National Reform Program's re-education camps. The citizens are suffering from a militaristic tyranny and federal extortion at the expense of an ambitious space program designed to propagate the galaxy with model citizens of the Republic. But a silent underground faction plans to commandeer a ship and make a great escape to the stars.

Great read but is simply an extract from Coyote

This book is just an extract of the first few chapters of Coyote. If you buy that book you have this content so it is really not woth it. If you are going to listen to this, then you should listen to all of Coyote -- one of the best novels in sci fi in many years.

I thought that it would be an expansion of the book, "Coyote". Instead, it's an extract of the first few chapters. We meet the characters that will comprise the book and this novella was entertaining. It does not go into the details that are revealed later in the book and the trilogy. It's exciting but don't bother if you've already read the book "Coyote"...like me. I feel marketed!

It???s the year 2070 and the United States is a mess. There???s civil war and, while people are suffering, the totalitarian government chooses to spend its money on a massive space program. In fact, the countdown has begun for the launch of the starship Alabama which will establish humanity???s first interstellar space colony. The ???Intellectual Dissidents??? who disagree with the government???s actions are rounded up for ???re-education??? and are never seen again, but many have been undetected and they???ve got a vast conspiracy going on. Robert E. Lee (a descendant of THE Robert E. Lee) is the captain of the Alabama and he and his crew and a group of dissidents are planning to hijack the ship and secede from the USA. This is a huge and dangerous operation. If caught, they???ll be tried for treason. Will they be able to pull it off?

Stealing Alabama is, as Allen Steele explains in the introduction, a story about the settlement of the United States in a science fiction context. Here, space is the ???New World??? and its new settlers are fearful, but hopeful of a better life where they???ll be free of tyranny.

I was intrigued by the premise of Stealing Alabama and I thought it was an entertaining story. Unfortunately, the plot focuses mostly on the actual logistics of the covert operation rather than philosophical discussion of why the dissidents want to leave or the immense mental and emotional consequences of realizing you???re about to abandon everything you know for something completely unknown. Allen Steele could have done so much more with this aspect of the story. Stealing Alabama is the beginning of his novel Coyote, and I???d guess that the novel more fully explores these issues, but they???re noticeably lacking here and it affects the emotional impact of the story. Still, I liked it enough that I want to read Coyote.

The setting of Stealing Alabama is, of course, Florida???s Space Coast. That???s where I grew up, so it was a joy to visit the cities, rivers, islands, causeways, and beaches I???m so familiar with. I had flashbacks when Steele describes the way that thousands of people camp out along the waterways to wait for the shuttle launch. This was one of my favorite parts of the book.

Audible Frontier???s version of this Hugo-nominated story is 3 hours long and performed by Marc Vietor who, I???m starting to believe, can do no wrong.
Originally posted at Fantasy Literature.

Good but think before buying.

This is an excellent stand alone book but is actually included in the book called Coyote. It is the first few chapters of that book as I found out when I bought it after listening to this. Save yourself a few quid or a credit by buying that book only.