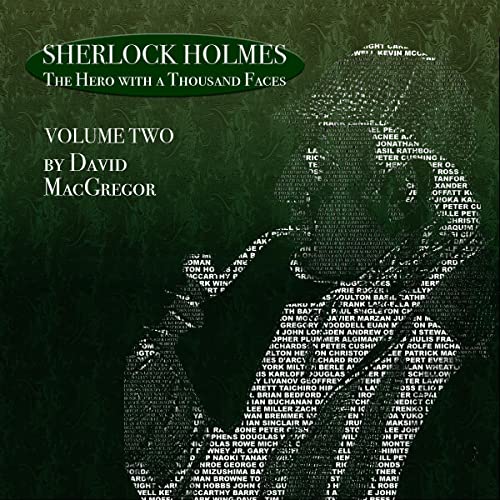 Sherlock Holmes: The Hero with a Thousand Faces - Volume 2

By: David MacGregor
Narrated by: J.T. McDaniel
Try for $0.00

Picking up the trail with the incredibly influential films of Basil Rathbone and Nigel Bruce, Volume II goes on to explore the antiheroic Sherlock Holmes films of the 1970s, and then the somewhat rocky journey of Holmes into the medium of television (actors Alan Wheatley, Douglas Wilmer, and Peter Cushing all declared their respective TV series as the worst experience of their professional careers).

Television finally found its "definitive" Holmes in Jeremy Brett's portrayal for Granada Television, and then the BBC's "Sherlock" had flashed brilliantly across the cultural sky before crashing and burning in spectacular fashion.

Now a full-fledged transmedia phenomenon, Sherlock Holmes can be any gender, ethnicity, or species, and is celebrated in fan fiction and fanvids, as well as conventions that are far more inclusive than Sherlock Holmes societies of the past.

Vincent Starrett's poetic notion that Sherlock Holmes is a character "who never lived and so can never die" has never been more true, and the Digital Age promises any number of new versions of Sherlock Holmes to come.

What listeners say about Sherlock Holmes: The Hero with a Thousand Faces - Volume 2

In this second volume the author tackles Rathbone and Nigel Bruce's films (which I hate with a passion as hot as thousand suns!) and the short term TV shows that popped up from time to time with mixed luck; the glorious and gorgeous Jeremy Brett's version in Granada TV (yes, my favourite one, why would you ask? :P ), BBC Sherlock; Elementary, Miss Sherlock... yes, we are, now, up to date. At least, as much as up to date as you can be in the subject of Sherlock Holmes and media :P

This book is a veritable source to everything Sherlock Holmes related, it's informative, entertaining, and written with passion. You can feel the author's love for his subject and that makes it even easier to read.

Essential for every single person who loves Sherlock Holmes and John Watson. No, seriously, go and read it; you'll agree with me :D