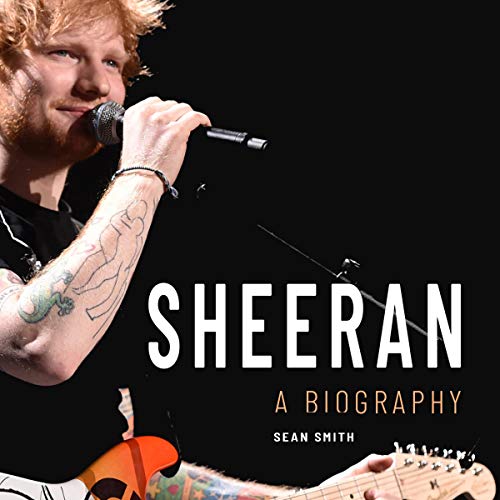 The first comprehensive adult biography of the beloved, redheaded “Shape of You” songster, complete with exclusive interviews and all-new research!

Grammy award winner Ed Sheeran strikes chords in millions of listeners worldwide - a feat all the more staggering given that he couldn’t even carry a tune until the age of 15. At 13 - then just a guitarist in a school rock band but today’s most successful solo star - he decided he would fly far higher than hometown fame. Within a year, he had recorded an album in his bedroom.

Best-selling biographer Sean Smith traces the astonishing journey of the shy little English boy with a stammer who, avoiding flashy showmanship, grew up to become a global phenomenon. With compelling new research and interviews, Smith delivers the story of Sheeran’s remarkable parents, who supported their son’s dream long before it seemed achievable; the friends and mentors who encouraged his raw talent; and the lovers who inspired his most famous songs.

Smith describes the setbacks Sheeran faced before his fortunes were transformed by Elton John’s management company, a record deal, and a song that changed everything...with some help from Taylor Swift. Now, Sheeran has sold 150 million records worldwide, earned $432 million touring in 2018 alone, and broke records with his 2018 UK tour. But he still made time to play for just 400 people at a charity night to raise money for the homeless last year.

As this captivating book reveals, there’s no one quite like Ed!

Sean Smith is the UK’s leading celebrity biographer and the author of five Sunday Times best sellers. His books have been translated throughout the world. His subjects include Kate Middleton, Kylie Minogue, Justin Timberlake, Britney Spears, Victoria Beckham, Jennifer Aniston, and J.K. Rowling.

Described by the Independent as a “fearless chronicler”, he specializes in meticulous research and going “on the road” to find the real person behind the star image.

Ian Pringle now ration was excellent. You can tell this is not a book where he powers other stuff he’s read because as I was reading it I just knew it was well researched well narrated and kept me listening. This book is so good I love Ed Sheeran now I love him even more LOL!