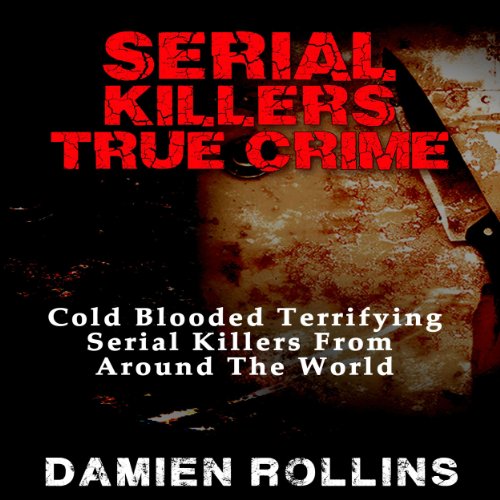 By: Damien Rollins
Narrated by: Francesca Townes
Free with a 30-day trial

We live in a society obsessed with monsters. Think of all the television shows and movies in just the past two years featuring vampires, werewolves, and assorted creatures of the night. We like being scared, screaming in the middle of a crowded movie theatre and then awkwardly pretending it was someone else. The feeling that we can go home safe, believing that it wasn't real. But, monsters are real, and human beings can be the scariest of them all.

It's an unfortunate fact that real life is sometimes more twisted than even the worst horror writer can imagine. Nowhere is this seen more clearly than when discussing serial killers. While many people can understand, if not condone, a crime of passion or vengeance, it is different for those who kill, time and time again, for reasons that the common person, could not hope to understand?

Those familiar with the Criminal Minds series will already know that the FBI has spent a great deal of time and resources in tracking, capturing, and ultimately understanding serial killers. According to them, a serial killer can be classified as such if he (used loosely since there are female serial killers):

These points help to distinguish a serial killer from spree killers or even mass murderers, since these two groups tend to lack a cooling off period. However, some experts have suggested the inclusion of a hybrid "spree-serial killer" category. This is because some serial killers have experienced prolonged periods of sequential murder without the expected "rest" in between.

If you like learning about aberrant violent behavior, this is a good book. Short, but a well laid out explanation of what a serial killer is. Also, listening to a book like this is maybe better than reading because when you read, you have a tendency to read through some passages too quickly and not really get all the info. I really feel that I learned a lot for the time invested.

What was one of the most memorable moments of Serial Killers True Crime?

It was interesting to hear what Jack the Ripper and Jeffery Dahmer actually did when they murdered. It's different from what I always thought.

What does Francesca Townes bring to the story that you wouldn’t experience if you just read the book?

I thought that Francesca Townes did a great job. Very nice voice and articulate, and read at a good pace.

Kind of a crap book but reasonably entertaining for a short road trip. The bit at the end about Thug Behram was unexpected and therefore interesting. I wasn't interested in the preface about the author at the beginning.

These serial killer junk books are almost always narrated by men trying hard to imitate the guy who does all the movie trailers. So, it was refreshing to hear a female voice in what was otherwise familiar territory about famous serial killers. Classed it up a little and kept my interest. Can't figure out why the "performance" has gotten lowest ratings, since it's the best thing in the book.

This audiobook really sounds just like a documentary you might see on the History Channel, but no music. I actually found this audiobook because I like this narrator. I can understand everything she says, and she makes the narration fun (but not funny in this one). This isn't normally the kind of book I listen to, but I'm glad that I got it and feel that it was ultimately a good choice for me.

There's some gory descriptions, but I thought that they were handled well both by the author and the narrator. Really it reminded me of watching a TV documentary but I was able to take care of work while listening, without feeling like I was missing something by not seeing a TV screen. I saw the whole thing in my head, creepy killers and all. That's some good narration!

This was a fascinating look into the minds and ways of serial killers. The author goes into pretty good detail about the motivation and categories that most serial killers tend to fall into.

The end of the book goes into the history of some of the most notorious serial killers that we know about (Jack the Ripper, H.H. Holmes, etc.).

I found this book to be very good, albeit, a scary look at how some seemingly perfectly normal people, living right among us, can turn into/become serial killers.

Narrator is a little off

Great book, but the narrator was a little "nice" I almost felt like she was reading a kids book instead of a true crime book.