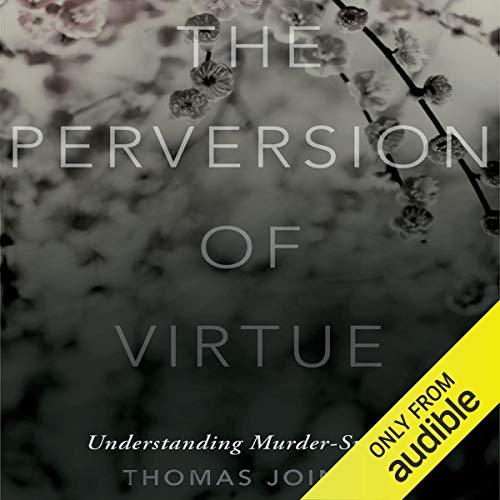 The Perversion of Virtue

By: Thomas Joiner
Narrated by: Chris Kayser
Try for $0.00

Of the approximately 38,500 deaths by suicide in the U.S. annually, about two percent - between 750 and 800 - are murder-suicides. The horror of murder-suicides looms large in the public consciousness - they are reported in the media with more frequency and far more sensationalism than most suicides, and yet we have little understanding of this grave form of violence. In The Perversion of Virtue, leading suicide researcher Thomas Joiner explores the nature of murder-suicide and offers a unique new theory to explain this nearly unexplainable act: that murder-suicides always involve the wrongheaded invocation of one of four interpersonal virtues: mercy, justice, duty, and glory. The parent who murders his child and then himself seeks to save his child from a fatherless life of hardship; the wife who murders her husband and then herself seeks to right the wrongs he committed against her, and so on.

Murder-suicides involve the gross misperception of when and how these four virtues should be applied. Drawing from extensive research as well as real examples from the media, Joiner meticulously examines, deconstructs, and finally rebuilds our understanding of murder-suicide in such a way that brings tragic reason to what may seem an unfathomable act of violence. Along the way, he dispels some of the most enduring myths of suicide - for instance, that suicide is usually an impulsive act (it is almost always pre-meditated), or that alcohol or drugs are involved in most suicides (usually they are not). Sure to be controversial, this audiobook seeks to make sense of one of the most difficult-to-comprehend types of violence in modern society, shedding new light that will ultimately lead to better understanding and even prevention.

What listeners say about The Perversion of Virtue

There is a severe lack of resources out there dealing directly with murder-suicide in the way so many of us need after being personally affected by this specific type of horror and tragedy. As someone who was a close friend to a person who perpetrated one, I found thus book wonderfully refreshing. It provided so much clarity on a horrific issue, and aligned so well with everything I knew of my friend in the weeks leading to his and his soon-to-be-ex-wife's deaths and how suicidal he had become.

After having also lost an uncle to (pure) suicide 4 years prior, I also appreciated Thomas Joiner's exploration, in depth, of suicide throughout this book.

Not having read his previous two works on suicide, this book stood alone very well and explained all the necessary context for suicide that it needed to, and the narration was extremely well done and easy to follow, full of passion and emotion and kindness despite how scientific the writing can be, how it's a prioritization of truth, however harsh it may be.

As an atheist and nonbeliever in anything supernatural, I found this book remained fairly secular and neutral throughout, never once making a true stand on if God or Heaven exists, so that it would remain focused on the science and what we all can agree is true without alienating readers/listeners. However he does bring up The Bible many times, enough that it seems very likely the author is biased toward Christianity himself. And while it could be interpreted metaphorically, he concludes the book discussing how he believes humans have souls and spirits. It was compatible enough with my worldview nonetheless and I forgive the book for that because this is the book I needed in my life. I'm so glad it has an audio version for me to consume, as well, and a very well done one at that.

Insightful to professionals and the novice.

When doing my psychiatric training, I read both 'Why people die by suicide' and 'Myths about suicide' by Thomas Joiner - This was by far my favorite due to the uniqueness of the topic. Offers exceptional insight into viewing murder-suicide, which can aid anyone to challenge public perceptions and help to educate people around suicide, in particular, murder-suicide.

A relevant book explaining the unthinkable actions of those who commit murder and suicide, a phenomenon that is fast becoming a regular theme in news stories all over the world.
My only wish is that those who commit these acts of murder /suicide would do the suicide first.