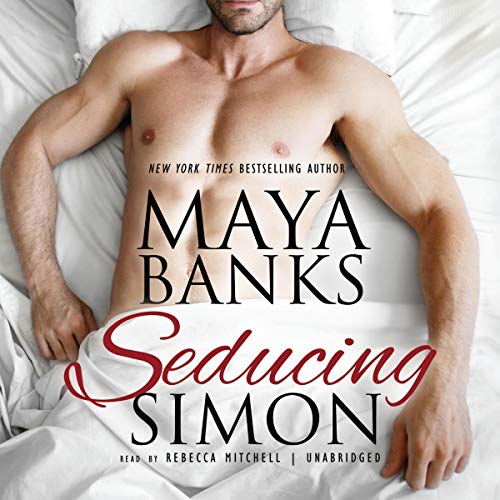 By: Maya Banks
Narrated by: Rebecca Estrella
Try for $0.00

Toni Langston has been in love with Simon, her best friend, for years. The night Simon breaks up with his longtime girlfriend, he and Toni make love. Toni is devastated and humiliated when, in the heat of the moment, he calls her by his girlfriend’s name. The next morning, Simon remembers nothing of the previous night and Toni is only too relieved not to remind him.

Two months later, she discovers she’s pregnant. She wants Simon to love her, apart from any obligation he might feel because of the baby. So she embarks on a quest to seduce her best friend, to make him see her as more than a little sister, to make him love her as much as she loves him. It works. Maybe too well. Now when things are perfect, she faces telling him of the secret she’s kept.

What listeners say about Seducing Simon

Would you listen to Seducing Simon again? Why?

Yes, if someone else was doing the narration. The story was just a straight forward romance. No mysteries to solve, no evil characters hanging around--just a "let's listen to this and enjoy" kind of story. Sometimes it is just nice to listen to an "easy" listen.

The relationship between all the characters--not just Simon and Toni. These four individuals has made a true family for themselves and it was fun to listen to the interplay between them all.

Get a different narrator. When I listen to my audiobooks, I like to be able to distinguish between the different people in the story. This narrator used almost the same voices for all the characters...male, female, young or old. AND when the story calls for someone to yell or get angry or upset, it would be nice for the narrator to at least change the tone of the narration....It was all the same drab thing...Happy, angry, crying, scared...never a change in the tone . Unbelievably bad!

Some of the scenes were funny. Some of the reactions to how Toni would act or look...that was pretty funny

For a Banks book, this was ok to fairly good.

I think I just have such high expectations for every single Maya Banks book I read/listen to after listening to the Sweet Series and McCabe Clan Series. This was simply ok to fairly good. There were great moments, but then there were boring moments. The plot line was good, but at times, I was like Toni should have just told Simone about the baby already... but no... Secrets Secrets! The ending was a bit dramatic… but I like the HEA ending.

Ok narration. There really isn't a difference in male voices or female voices. The narrator more so read it not narrated it... if that makes sense... It was still decent though.

Credit... not a Maya Banks gotta have must buy! Maybe even a sale.

Please don't go buying this expecting it to be the usual HOT listen that Maya Banks usually writes (and the cover suggests) as it's definitely not - it's more Mills & Boon.

But what it is is a tender, sweet, riveting romantic book about the dilema of unrequited love which include secrets, seduction and hope as two best friends take a gamble of crossing the boundary of friendship hoping it will lead to love but aware they could lose everything. Another well written MB book (just without any heat!) and, as it unfolds, you understand the emotions of both the main likeable characters involved and find yourself pondering over the all important question of should she tell him and exactly when would the right time be.

You'll laugh, cry and sigh as their turbulent emotionally and sexually charged relationship grips you, then events and a disaster spins you about until, in the end, you're spat out the other end breathless, exhausted but grateful for another great listen.

Worth a credit? Well it falls under my $10 rule, so my dilemma is if it was $19.77 instead of $9.77 would I regret the credit - no I wouldn't but I would have liked/expected it to have been longer and to include either the addition of her usual spice, or a final chapter or epilogue that not only wraps up the HEA but puts a nice big pink or blue bow on top.

The narrator sounded bored. Her voice almost lulled me to sleep. The story itself dragged on and ended before she had the baby. It was the whole point of this book and we got next to nothing about it.

The narrator’s voice is soporific.

I can’t tell you how many times I fell asleep trying to listen to this story. It is the vocal equivalent to watching Kristen Stewart act. The story is ok. I know it was originally published in 2006, but it obviously was republished for narration. All I could think was, why does no one have a cell phone?!?

the narrator liked this story. it was horrible. please get a new one and send the old one to get some emotions

Just pass this one up. Worst monotone narration I’ve ever heard. Couldn’t make it through the first half of the first chapter. How it got any good reviews is beyond me!

I finished listening to the full story and probably would have enjoyed it more if the narrator wasn’t so boring and monotone. I felt like I was watching Kristen Stewart’s face waiting for some emotion to break through. I’m currently on a binge of cheesy romance stories and this one fit right in. You can guess the plots and expect the crisis. Kept my interest. Too bad the narrator droned on.

The narrator killed this book!

Would you try another book from Maya Banks and/or Rebecca Estrella?

I would read/listen to another book by Maya Banks definitely, but I don't think I could sit through listening to Rebecca Estrella. Her voice is so monotone, it made this book almost unbearable!

Who would you have cast as narrator instead of Rebecca Estrella?

Andi Arndt would be my first choice. Megan Tusing or K.C. Sheridan

Ok I want to know if Simon really was that drunk that he forgot a night of sleeping with a women, how did he drive himself home? If he got blacked out drunk, he wouldn't of been able to.
That stuck with me the whole story and just made it extremely hard for me to listen to. If you can get over that, and the weird relationships that are going on, go ahead and listen to this one.