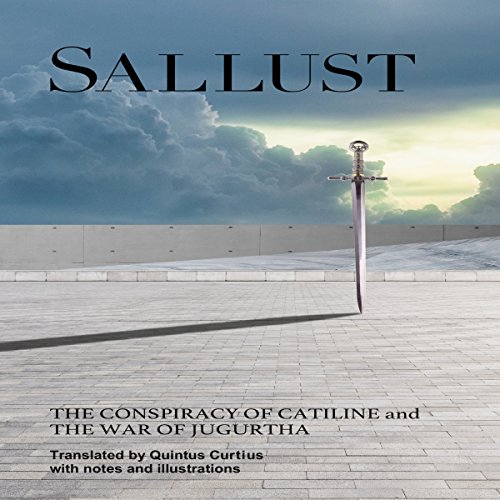 By: Quintus Curtius - translator,Sallust
Narrated by: Saethon Williams
Try for $0.00

This new and original translation of Sallust’s Conspiracy of Catiline and War of Jugurtha uses a fresh, modern English idiom that preserves the flavor of the historian’s famous epigrammatic style. Fully outfitted for comprehension and efficient referencing, this special edition contains the following features:

Considered the first of the great Roman historians, Sallust has been read for centuries for his penetrating character studies, timeless moral insights, and matchless rhetoric. His profiles of flawed men led inexorably to ruin by excessive ambition or character defects resonate with us today more powerfully than ever.

Intrigue…murder…the lust for power…and the fatal hubris that leads men to their dooms. These are some of the historian’s gripping themes.

Deeply concerned with the moral decay and corruption he saw around him, Sallust’s pragmatic views of historical forces, personalities, and the psychology of power were aided by his own direct participation in the highest levels of Roman politics.

The Conspiracy of Catiline tells the dramatic story of renegade senator Lucius Catiline’s attempt to seize power in Rome during the waning days of the republic. The War of Jugurtha recounts the rise and ultimate destruction of the headstrong Numidian king Jugurtha, who waged an insurgent war against Rome from 112 to 106 B.C.

What listeners say about Sallust

I think this text could be more interesting but the narrator sounds like Jonathan Harris doing a more snobby version of Zachary Smith. I found him dull and tedious, so much so that at times I was unable to follow the story.

As for the translation, I found it nice that many footnotes are included. At a few times the footnotes are a bit demeaning assuming basic meaning was not obvious, but the historical context notes were very helpful.

The history itself is fascinating and I was struck by parallels. When the founding fathers of the United States chose Rome as their model, they seem to have set us on the same path. Will the U.S. will also follow in Rome's fate. Time will tell.

A pleasure to listen to.

This translation is an exciting history that demands your attention.

These two histories have parallels to modern times.

Quintus has done a great service by translating these works into modern english for us.