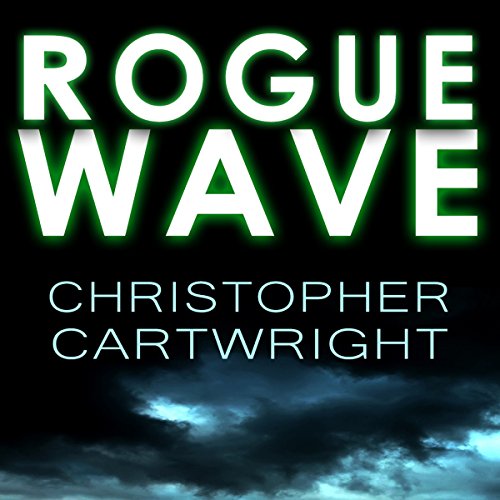 The offer - $20 billion split between four leading scientists on alternative energies to purchase and then squash their research lines, which include the recent discovery of a powerful new energy source capable of replacing mankind’s reliance on fossil fuels.

There’s no doubt their discovery is worth 10 times that much. But will any one of them live if they refuse?

At the same time, the greatest technological advancement in warfare since the creation of the atomic bomb has been discovered and is being offered to the highest bidder.

There is just one problem, though; the seller might no longer have any control of the weapon.

Can Sam Reilly weave his way through the web of industrial and political espionage before the human race loses its greatest fight for survival?

What listeners say about Rogue Wave

I am really enjoying this series by Christopher Cartwright. This book is a standalone listen and incorporates science with mystery, action, espionage and politics. The premise of the rogue wave is thought provoking, along with the science written behind it. I so enjoy the character of Sam Reilly. He is larger than life like an action hero. I was pulled into the book from the very beginning with its imagery and original storyline. The author weaves some very unexpected twists into the book, that I did not see coming. I loved it! David Gilmore is the perfect narrator for this series. He adds the right suspense, tension, and other emotions to his performance.

I was given this free review copy audio-book at my request and have voluntarily left this review. This review is for the audio copy of Rogue Wave - Sam Reilly, Book 4 by Christopher Cartwright and narrated by David Gilmore. Book 4 continues the adventures of Sam and Tom and company. This was very entertaining with lots of adventure, exploring and mayhem. This one has a bit of technological innovation interwoven into the story. I am still enjoying the story within the stories. David is consistent with his superlative narration.

Wow! Christopher Cartwright has done it again. Rogue Wave is an amazing book, although the first half of the book or so is a little slower than the previous books in the series. Once the reader learns what is actually going on and events fall into place, one realizes how incredibly brilliant this author is.

I love how I feel like I've learned so much by the time I finish one of these novels. There is a huge amount of science and technology that I have no experience with in each of these novels and I truly feel like I understand how it works once I've read the extremely detailed descriptions.

Audio quality is spot on as always.

Overall great book and one of my favorite authors! Can't wait to listen to the next one!

A Sea Full of Tension

I’ve always been interested in rogue waves. They rise without warning and often sink vessels caught in their paths. So when I noticed that there was a Sam Reilly novel with this title I had to take a look. There are two mysteries here (in addition to the Dirk Pitt like historical mystery). On the one hand, who killed Sam’s old friend when he refused to sign onto a deal which would make him rich in exchange for burying his discovery of a new environmentally friendly energy source that could replace fossil fuels. The other is, how the bad guys were able to use a rogue wave as the murder weapon.

This is a fun novel. There’s a little bit of science fiction technology involved, but mostly it’s a tense and exciting adventure on (and beneath) the high seas. As Sam and his team come closer to the truth, it becomes apparent that a global catastrophe is about to occur and that a powerful figure in the U.S. government is responsible for the danger. There’s a sea full of tension in this one.

Another great addition to the series

These Sam Reilly books are really starting to grow on me. They are fun, fast-paced adventures. Sometimes they seem to stretch the math and/or science a little, but there is enough of a hint of real science to keep them interesting, and I am learning some real science from them (who knew that there really were rogue waves out there?).

As usual, the narration was rock solid.

I received a free copy of this audiobook in exchange for an unbiased review, which I voluntarily leave here.

Cruise ship reading?? Only if you're BRAVE!

Some of the spookiest, most visual underwater scenes ever. And anyone who's seen footage from tsunamis will be able to totally visualize... OOPS! No spoilers! (Let's just say I'm not going to stand by the green water when St Patrick's Day rolls around again)

I had to listen to the last chapters multiple times because so much is layered in. I wanted to smack the author for what happens to one bad guy (okay, woman) but the major clues about the Master Builders leading a trail to the next book more than made up for it. I would really love to see these books made into movies - they are SO visual!

Be prepared to binge listen this author.

truly enjoyable
these adventure scenes were extremely easy to fathom as if you were there.

I found this audiobook to be a very good listen. It has a great combination of mystery, suspense, drama and danger. The narrator does a wonderful job of reading this book.

Another great book from Cartwright and still good narrating. very good story, much action and very good caracter development. Can hardly put the audiobook down whilst listening, and that I see as a very good sign.

This was quite a different book then I am used to but enjoyed it very much. Great storyline and kept my interest for a long flight. Enjoyed the narration very much.

Ok this was not my favourite book in the series because it felt like a slightly different story to normal because we were looking at nanotechnology and at times I found this a bit technical but overall regardless I love Sam and his friends and so really enjoyed this story but kind of miss his shipwrecks.

Sam does it again

Another boys own meets sci fi in the fourth book of the series. Each one gets better but there’s no let up in the action which is on every page sometimes believable and often “as if”. But if you want a no brainer roller coaster ride then give it a go

Great book. Sam Reilly is developing with each book. As is the author. Very similar to early Clive Cussler. Recommended. Reviewed from a free copy I had

Mystery and Adventure in Abundance.

Sam and his team are desperately seeking answers to the latest mystery that threatens the planet. The adventure takes many twists and turns with lives constantly threatened and on the line. Through superb narration the listerner is fully immersed in this very well written novel. There's drama a plenty with moments of humour, very enjoyable.

Kept me fascinated to the end - then the epilogue leads me straight to the next book - looking forward to more from this author.

I love these books.

To me, the style these books are written in is reminiscent of the old style adventure novelists like H. Rider Haggard - who wrote King Solomons Mines and its sequel plus many other novels.

The author kindly gave me a free copy of book three and I was only halfway through listening to it when I knew I had to stop and read the first two before I finished it and was very happy to find this compilation.

If you want an adventure story that is just that without the gory bits that often are added to modern novels just to colour it but don't actually add to the story.

I have now listened to all six available on Audible and am sad the rest of the series so far is not available via Audible. I hope they read this review and consider adding them as listening via Kindle is just not the same.

The Narrator David Gilmour is the perfect choice for reading these books.