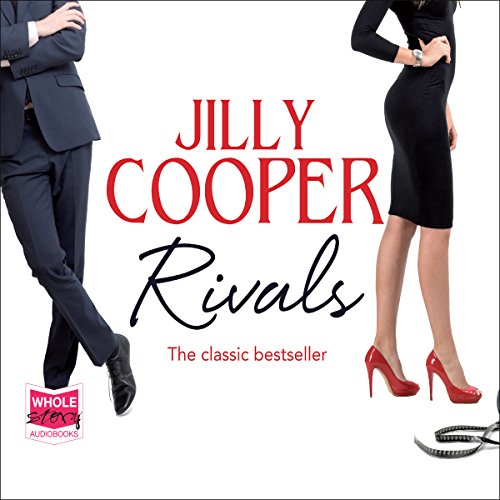 By: Jilly Cooper
Narrated by: Sherry Baines
Try for $0.00

As a rival group emerges to pitch for the franchise, reputations ripen and decline, true love blossoms and burns, marriages are made and shattered and sex raises its head at almost every throw....

What listeners say about Rivals

I don’t read romance novels but I got this audio book free. I loved it. Character development is superb and the plot immersive. I will certainly read Jilly Cooper again!

A very-funny leap back to the 80s, when even dishonesty was more honest. Some wonderful characters and an enjoyable plot that keeps you entertained all the way through

Great story once again from Jilly Cooper. Didn't want to put it down. Well done

Sherry has a wonderful voice for audio books. I enjoyed listening. Jilly Cooper is such a great author and story teller and I think Sherry paid homage to that.

For future reference, Moet is pronounced with a hard ‘t’ and not Moay! It’s derivative is Dutch not French!

Audible, thanks for listening... this one works

Whilst not wishing to rake up old problems, most of us who have read Jilly Cooper's Rutshire Chronicles over the years were puzzled why so few were recorded, and those out of order. So when Polo and Rivals were released not long ago we were delighted - until we heard them. The reviews were pretty unanimous, but it seems Audible really did listen as both recordings were eventually withdrawn.
Now books 2,3,4 and 5 (Rivals, Polo, The Man who made Husbands Jealous and Appassionata) have appeared, with book 6 (Score) to follow, all by a fresh narrator, Sherry Baines, so we have consistency - but what about the quality?
Relax, we seem to be in safe hands with this one
I only downloaded Rivals this morning and was reassured by pleasant, clear narration from the start. Slightly slow and laboured at first but soon got into its stride. Then we got to the Becher's Brook for narration in Rutshire: the divine Taggie. Sherry Baines has given Taggie a soft, gentle, low Irish accent exactly as described in the books and as I imagined Taggie to sound, so thanks to all concerned for the re-recording.
Of all the Rutshire books I think this is my favourite, Rupert continues to be Rupert, Billy and Janie Lloyd-Fox put in another appearance, and the new characters introduced are some of the best in the whole series. The O'Hara family above all, then the lovely Freddie and ghastly Valerie Jones, LIzzie Vereker who is far too nice to be lumbered with James, but whose life is immeasurably changed during the course of the book, Bas, Monica, Dame Enid... and so many others. And the whole process of putting together a bid for an independent television franchise is fascinating, and detailed. It's a great read.
I know I haven't heard it to the end yet, but I know and love the book and I've heard enough to be reassured. I was one of those who were pretty scathing about the previous recording, so in fairness I want to say "thank you for listening Audible, - and this one works”
Gerri Halligan, who recorded books 1 and 9, seemed to be everyone's favourite, but hasn't returned. Sherry Baines isn’t Gerri, but she does a good workmanlike job. If Sherry has been contracted to read up to book 6, please give us consistency by getting her to record books 7 and 8 (the only unrecorded books) as well.
So, with Rivals part heard, and Polo, Lysander, Appassionata and eventually Score waiting in the wings, it's back to the headphones... this time with a smile

Read this many moons ago and several times since in hard copy. Such a joy to listen on audio. Like all Rutshire devotees, I’m falling in love with Rupert and Taggie again. The only problem I have with this title is that I can’t stop. Please help.
Could someone pop round and tidy up a bit and feed my children and dogs.

Much better second time round

I bought the original recording of this a few months ago and am pleased that it has now been re-recorded. The narration this time is really good.
This is my favourite of the Rutshire books. I love the way Rupert’s character develops in this - the rivalry between Rupert and Tony is brilliantly done and the franchise battle is really interesting. Best of all is the way Jilly shows the characters at their worse as well as at their best.
Of all the books I have read over the years I have never wanted a couple to have their HEA as much as Taggie and Rupert.
Brilliant!

Jilly Cooper is great which is why I bought this to listen to after hugely enjoying Riders narrated by Gerri Halligan - but, man o man, is this audio book ruined by a clipped, news-reader, dated-sounding voice. Sherry Baines (I’m sure she’s lovely in real life) has a slightly shakey, bitter, sweeping, 50+ English accent with a cringe-y old-fashion Alan Partridge-like pronunciation of ‘r’... “...furriously rrreprimanded..” more suited to narrating Gone With The Wind or Brief Encounter, not JC’s racy sex scenes. This is a story set in the 1980s with characters in their 20s and 30s and frankly would be more accessible if the narrator had a younger sounding voice. With the exception of the spoken bits, there is not nearly enough variety in tone, all sentences have the same intonation and end up landing in my ear the same way. It’s so disappointing! I couldn’t get past chapter five as I was distracted the whole time by the annoying sound of her voice.

I much preferred listening to Riders narrated by Gerri Halligan but couldn’t find the next books in the Rutshire Chronicles read by her. I had a hunch I wouldn’t enjoy Rivals when I listened to the sample. My advice to other audible readers is to listen to the sample before buying and go with your gut when choosing between narrators. I really wanted to hear this book but didn’t have a choice here.

Sorry Sherry but - Bring Back Gerri!

Thank Goodness for the re-recording

Sherry Bains does a worthy job of reading the Rutshire Chronicles, which is wonderful after the total pigs breakfast that other narrators have made of reading them. The story line isn't as strong as Riders but it's still all passion, betrayal and despicable behaviour, making an engaging listen.

The Redemption of RCB

What a difference 3 years makes! JC's previous book, "Riders", was almost comically anti-social-consciousness. Like a deliberately inflammatory love letter to Thatcher, Reagan, anyone of that time period and ilk. And her "bad boy" main character was a repeated rapist and a bully.
In this novel (published 3 years after the first one, but set in a more modern Britain) Rupe redeems himself in an only slightly icky way, by falling in love with a teenager and--in the bit that actually redeems him--trying to overcome his passion for her. I loved Taggie too, although at nearly Rupert's age, I'd consider myself too old for her... still. It was the 80s. We knew less about adolescent psychology, then. Besides, Tony Baddingham makes a much more villainous villain.
Selfish as he was, my own favourite character in this was Declan O'Hara. Geniuses are allowed to be selfish, as long as they're also kind to others, and Declan is kindness personified to the people who work for and with him. I didn't feel the same admiration or liking for Maude, but I thought she made an excellent chaacter, and I could see how she and Declan belong together.
Overall, I enjoyed this book exponentially more than the 1st book in the series. I'll start "Polo" soon, and IIRC, it's rather good, as well.
Final note: I'm so sorry to say it, but I overwhelmingly preferred the narration by GH. SB sounds every bit as monotone, and reads with extraordinary odd pauses, as other reviewers have said. If I didn't get a free credit each month, and these books weren't so long, I'd never spend another credit on her narration.

I really like this book, it's a brilliant example of Jilly Cooper's tried and trusted storytelling. Her characters are all larger than life, and the whole book is a spicey concoction filled with delights!

The reading however leaves a lot to be desired. Sherry Baines reads it in the style of an old football results announcer from the 1970's - it's infuriating.(Heart of Midlothian 1, Motherwell 3) Her reading is totally at odds with the story, which has charm, sex, drama and wit. Her BBC RP tones are not conducive to the tale: her over pronunciation ruins the flow, her paragraph breaks are confusing. I don't understand why she insists on the strange rhythm of this reading, or perhaps she was directed to come up with this totally baffling spoken word choice. It doesn't do justice to top Jilly Cooper's book.

Oh Audible, please get Gerri Halligan to rerecord this book - my ears are all but bleeding, my teeth on edge - anything but this!

Fantastic book for a bit of escapism.

Just what you would expect from Jilly Cooper.

Just love this story. Been reading & listening to it over & over since the 1990's. Enjoy! xx

cane back to this after 20 years. loved it. narrated is ok. easy entertainment. romping success!

loved this book, quientessential Jilly, great story. sadly narrators voice was irritatingly irregular, I spent the entire book turning volume up to hear, then down when narrator was in conversation mode - very annoying and spoilt the experience.

I read the books years ago and am keen to reconnect with them all.
I did find the volume on this difficult, I was always having to increase to volume and also there seemed to be an issue where often words were “clipped”. Other than those two annoying things I was able to follow the story and it is a pleasant way to hear a book whilst I spend a lot of time on the road ..... much better than listening to radios stations of today