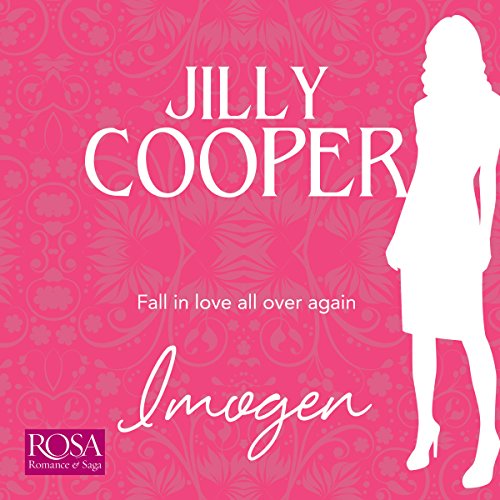 By: Jilly Cooper
Narrated by: Rebecca Courtney
Try for $0.00

As a librarian, Imogen read a lot of books, but none of them covered real life on the Riviera.

Her holiday with tennis ace Nicky and the whole glamorous coterie of journalist, playboy, photographer was a revelation. But the path of a jet-set virgin in that lovely wicked world was a hard one. Imogen began to wonder if virtue really was its own reward....

What listeners say about Imogen

So I always feel that we have to approach Jilly Cooper's romances in the same way that we would, say, Jane Austen or Charles Dickens, as dispatches from a different time when sexual politics and the treatment of women in society were very different. I listen to Jilly Cooper's books from time to time from nostalgia as I read them voraciously when they came out, but the rampant chauvinism is totally cringeworthy in today's more enlightened "woke" age, not to mention reminding us what life was like post pill but pre-AIDS. WASP-male world indeed. There's quite a lot of clunky terminology, even more clunky behaviour but the most clunks came from the narrator. Did she not read the book through at all before she recorded it? There was so much mispronounciation that what started as making me giggle ended in making me fume with irritation at the sheer unprofessionalism of it all. Did nobody else at the publishers listen to the recordings either? Apart from that, the narration was just okay aside, again, from her Irish accent which lived for most of the time on Merseyside (shame the "hero" was supposed to be Irish) and when one of the French characters was supposed to speak in a Yorkshire accent I thought she was going to do her epiglottis a mischief. So, lots of problems, but Jilly Cooper, along with Jackie Collins, invented the genre of the chick-lit bonkbuster and certainly writes a great story. I was immediately transported back to the early 1970s, the sights, the smells and the sexism. If you can see past that, and some words which may cause offence, then 10/10 for the story, 3/10 for the narration

Another time, another world...

Updated review: After so few of Jilly Cooper's books recorded, we had an explosion of them, involving both the Rutshire Chronicles (for which Jilly is best known) and these, the shorter single name novels of the 70s, of which Imogen was always my favourite.
I know I keep repeating this but for anyone just searching to see if Jilly Cooper has any new books published.: These books were written a long time ago, long before Rupert Campbell-Black made any appearance. Imogen was first published in 1978, over 40 years ago so I can understand why anyone younger, hooked on the Rutshire saga, has been disconcerted if they listened to Emily, Harriet, Octavia etc.. under the impression they are new novels. They aren't and they reflect the attitudes and morals of the time.
For me, and those of my generation they are great; revisiting our youth. Matthew O'Connor, in this book, and Gareth Llewellyn in Octavia are my two favourite male characters but both are badly let down by the narration, though Matt comes out of it better than Gareth did.
For those born in the 21stC they must be very confusing - why on earth does Imogen need her parent's consent to go on holiday with friends? Why all the panic and secrecy of going on the pill? Would anyone seriously set out for the South of France and pack Lady Jacintha's moth eaten red swimsuit, donated to the church jumble sale?
It was a different time, a different world, in some ways more innocent but in other ways a lot more fun. Not the greatest of narrations, but better than that of Octavia, another of the old ‘single’ novels. Octavia was so bad I couldn’t finish it.
In this book the majority of accents and characterisation aren’t bad overall, though what should be Matt’s glorious Irish brogue wavers a lot, but a lot of basic words are mispronounced. You can accept not her knowing how to pronounce John Donne, but psalm becomes palm, Gillette becomes gilet, plus the mangling of infinite, Curate etc etc)
Still, at least I managed to listen to this one right through...

I got half way through, but had to give up due to the ridiculous accents.

Spoiled by an appalling narrator

I have read this book over and over since my youth and I was excited to find the audiobook version, but the narration is so terrible, it really ruined the whole thing. The same narrator that did hatchet job on this book also butchered Emily - mispronunciation, incorrect reading of the text, and a terrible array of accents, apart from a few acceptable Northern accents. I really don’t understand how such a terrible narration would have been released - it’s embarrassing to listen to and totally detracts from what is a great (if dated) story.

Lovely to be reminded of this old ‘classic’ - though be prepared for some VERY dated and dodgy attitudes - sexism etc
However experience let down by some very poor and repeated mispronunciations throughout the narration - feels like there’s no production process. Shame.

The story is dated - but that’s ok when it’s a product of its time. Performers really should be familiar with common words when they read, however (it’s ‘infinITEly not ‘infately’, for example and pSalm, not ‘palm’). Also with the accents they attempt. It was disconcerting for an Irish character to be sounding Brummie and Scouse in turns. If I’m doubt, it would be far better not to attempt it!

This is a very funny book and, being Jilly Cooper, very well written. But the reader was SO APPALLING, I couldn’t get past chapter five. Constant mis-emphases, mispronunciations and terrible slow, dragging style. Awful.

Amazing book - Ive always adored this story it’s my favourite alongside Harriet - however the narrator was not on point and it was a bit frustrating - the biggest clanger was when Matt “spoke in fluent french” “Formidable!” in french it is NOT pronounced the same as English forMIDable good grief grrrr lol it’s for-mee-dabbler - seriously who doesn’t know that? The story is still brilliant though so don’t let the narrator put you off xxxx

Does no one check how words are pronounced after recording?
Eg bared its teeth ...said beared not Barr.. ed
curate...cure it & not as in curating a museum.
Monkeys in Gib..Gibraltar not gibbon. Soft g.
Imo...short for Imogen...not eye mo

I mogen along with other early characters of Jillys remind me of me. Wear the wrong thing, say the wrong thing and do the wrong thing
Have read Imogen so many times I was speaking the words before the narrator.. I love it 😁