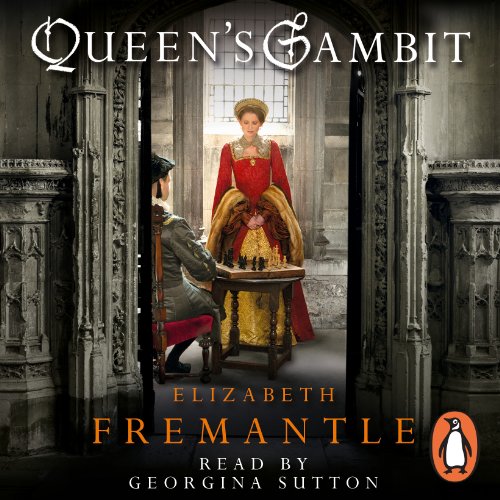 By: Elizabeth Fremantle
Narrated by: Georgina Sutton
Try for $0.00

The court of Henry VIII is rife with intrigue, rivalries, and romance - and none are better placed to understand this than the women at its heart. Katherine Parr, widowed for the second time aged 31, is obliged to return to court but, suspicious of the aging king and those who surround him, she does so with reluctance. Nevertheless, when she finds herself caught up in a passionate affair with the dashing and seductive Thomas Seymour, she believes she might finally be able to marry for love.

But her presence at court has attracted the attentions of another.... Captivated by her honesty and intelligence, Henry Tudor has his own plans for Katherine and no one is in the position to refuse a proposal from the king. So with her charismatic lover dispatched to the continent, Katherine must accept the hand of the ailing egotistical monarch and become Henry’s sixth wife - and yet she has still not quite given up on love.

What listeners say about Queen's Gambit

If you could sum up Queen's Gambit in three words, what would they be?

It takes you back to the Court of Henry VIII with a vivid sense of the terrors and infighting which was part of being a member of the Royal Household. All jockeying for the King's favour it lead to intrigue and plotting

Which character – as performed by Georgina Sutton – was your favourite?

Queen Katherine was my favourite

The point when Queen Katherine thought her upriver journey was going to end at The Tower of London and imprisonment. Instead, she was rowed to Windsor Castle and her sense of relief was almost palpable.

This tale illustrated the frailty of all who were under the eye of Henry VIII. His childish rages and cruel ways gave everyone a sense of danger. Savage punishments were carried out and torture was the order of the day. It was a great relief when, as history tells us, Queen Katherine outlived him.

I thoroughly enjoyed this book. Very well narrated, with each character very recognisable. Not so many books about Catherine Parr, but very interesting from start to finish, with tension and brilliant portrayal of the times. I would recommend this book to anyone interested in Tudor history.

Catherine Parr in a new light

If you could sum up Queen's Gambit in three words, what would they be?

Loved how their stories are told in the present, How Dot, her maid and Catherine's lives are played out at court and how dangerous that can be.
We all know Catherine was 'the one who survived ' but that was all I knew of her, apart that she married 4 times. The end of the book was sad and I did have a tear in my eye.

What does Georgina Sutton bring to the story that you wouldn’t experience if you had only read the book?

Loved her reading, the accents were great, although I don't know if they were correct, but still, what do I know of accents in Tudor times.

I bought this book in the Sale,I love History and thought ' I'll give this ago ' I'm glad I did, I really enjoyed this and have spread the word ( to family only ) and cannot wait to see a second book from this author. Brilliant first book!!

Good but not up to CJ Sansom

What made the experience of listening to Queen's Gambit the most enjoyable?

Actually, comparing the historical content along that of Lamintations by CJ Sansom. As the book is about Catherine Parr and her marriage to Henry and later to Thomas Seymour. The book of Lamintations is brought in and the difference in treatment was really interesting

None really as none of them was shown much of a character. We know from history that Catherine Parr was of a gentle but strong character but it does not come across so well in this book. I also think that the closeness to her maid was not believable

Not a lot if the truth be told. She could not maintain the accents throughout.

not nearly as much as Lamintations, although I was alerted by the part where her maid lost the papers she found belonging to Anne Asquith in the Queen's rooms , I thought that was Catherine's undoing. The finding of Thomas with Elizabeth was well done, again the maid almost dragging Catherine to the scene was so unbelievable that it spoilt it.

On the whole a good story. But if you have read the likes of Alison Weir, Phillipa Gregory orCJ Sansom writings on the Tudor period it will seem quite weak

Sometimes this seems to be a Tudor-costumed 50 Shades of Grey, at other times the great historic drama and tension are palpable through the fabulously delivered performance.

The characterisation and dialogue deserve great praise. It is not just the strength of, and attention to, Queen Katherine's characterisation, equal attention is given to that of maid servants and the King alike, drawing the listener in deeper and deeper into Tudor life.

A further aspect, beyond the excellence of plot, characterisation and dialogue, is that Queen's Gambit is better than any school history book at bringing to vivid life for the 20th Century reader/listener, the travails of 16th Century court life and the turmoil and terrifying upheaval of the Reformation. In this respect, it is very much at the superior end of current historical fiction.

This was an easy listen, great to listen when busy occasionally back-tracking just to keep up.

Katherine is the key to this novel.

No, sorry, i wasn't sitting on the edge of my seat, but you don't always want that from a book.

What made the experience of listening to Queen's Gambit the most enjoyable?

It had me on the edge of my seat, always exciting!

A new angle of the life of the forgotten Queen.

The adventure of Dot in Newgate Prison, so evocative!

So sorry when it ended, really enjoyed this book.

I used to be interested in the Tudors and I thought it might be interesting to see it through the eyes of Katherine Parr. I don't know how historically accurate it was but I enjoyed it. I thought the fear she must have felt came through well.

I did find myself trying to manufacture moments to listen when not in the car, and although we all know the ending it was still suspenseful (is that a word?)

Inspired me to read more

I found this book quite gripping - it cleverly demonstrated the emotions of the protagonist throughout while maintaining focus and historical perspective (although I do not know how historically accurate it was as I did not listen to the author's note). I would highly recommend this to anyone who enjoys historical novels.

Would you consider the audio edition of Queen's Gambit to be better than the print version?

I loved hearing this story told, full of feeling and wit. I have not read this book but feel I would not be able to do it justice as did the story teller, Georgina Sutton.

What was one of the most memorable moments of Queen's Gambit?

There are many moment in this story that had me laughing and also wanting to shake the Queen. Dot was a character that had you feeling all emotions for her, the shock to hear her William was married was so heartbreaking, for you wanted her to be happy....

I enjoyed the feeling she put in to the story, I found I got engrossed in it and found it hard to know when to stop listening for want of knowing more about the character.

At first when I picked this book I thought it would take me through a week or so but I got involved in it from the start and stayed up all night to hear over 10 chapters....so yes I wanted to listen to the story in one sitting but I was unable.

Fully loved the book would happier listen to it again, there are not many books I enjoy more than once but I feel this is one I shall have for long time, Thank you :)

A fantastic story - gripping at times. Wonderful story lines. Great narration. Buy this book you will love it!