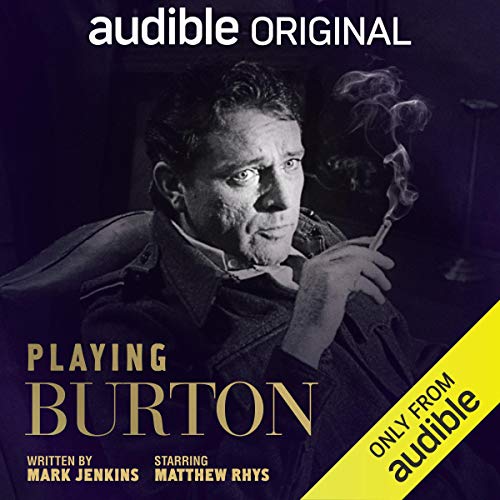 By: Mark Jenkins
Narrated by: Matthew Rhys
Try for $0.00

Emmy Award winner Matthew Rhys stars in this fascinating and award-winning one-man show about international star of stage and screen Richard Burton. Written by Mark Jenkins, Playing Burton offers a penetrating look at the notorious actor’s life, from growing up in an impoverished mining community in South Wales to becoming one of the greatest performers of his generation. Following his passionate, though tempestuous, love affair with Elizabeth Taylor and his tragic - and very public - battle with alcoholism, Playing Burton is a soulful exploration of fame, ambition, and identity told from the perspective of the megastar who experienced it all.

Mark Jenkins was born in North London to Welsh/Irish parents. He has worked as a musician, soldier, journalist and lecturer in economics. He has lived in Cardiff for the last four decades and became a full-time writer in 1996. His first feature film, The Scarlet Tunic, adapted from a Thomas Hardy short story premiered at Cannes and the Odeon, Leicester Square, London in 1998 and he has subsequently written another six feature screenplays including Peerless, the biopic of Cardiff boxer, Jim Driscoll.
His plays include Birthmarks (1986), which won the Drama Association of Wales competition, the prize-winning Playing Burton (1991), Strindberg Knew My Father (1992), Mr Owen’s Millennium (1995), Downtown Paradise (1996), Nora’s Bloke (2003) and Rosebud (2004), which won the Fringe First Award at the Edinburgh Festival Fringe and was described by Norman Mailer as "virtuoso writing, lyrical and rich." All have been published.
Playing Burton opened to two sell out seasons at the Edinburgh Festival Fringe, and has run continuously worldwide since. It has been translated and performed in four languages and been adapted for the screen. The film, Playing Burton, produced by Spinning Head Films, received the Best Film Award by BAFTA Cymru in 2014.

Matthew Rhys performed the leading role in HBO’s reboot of Perry Mason alongside John Lithgow, which premiered in June of 2020. Rhys also starred opposite Tom Hanks in A Beautiful Day in the Neighborhood for Sony TriStar directed by Marielle Heller.
He previously starred in his Emmy-winning role opposite Keri Russell in the popular FX series The Americans. The show was one of the most critically acclaimed dramas in the 2010s and received multiple best actor, actress, and series nominations. He can also be seen in the Steven Spielberg’s film The Post, Andy Serkis’s live action Jungle Book for Warner Bros, and an episode of Girls.
Previously, Rhys starred for five years as Kevin Walker on ABC's hit television series Brothers & Sisters, and appeared as the poet Dylan Thomas in John Maybury's film Edge of Love opposite Kiera Knightly, Cillian Murphy, and Sienna Miller. He made his New York theater debut in the 2012 revival of Look Back in Anger, for which he received rave reviews. In 2013, Rhys starred in the BBC mini-series adaptation of TD James’ homage to Pride And Prejudice, Death Comes to Pemberley, playing Mr. Darcy.
ORIGINALS

What listeners say about Playing Burton

A Look at the Legend

This was a play about the life of actor Richard Burton. Matthew Rhys portrayed him handily, and the accents were spot on. A touching look back into family dynamics, career and friends, it was entertaining.

This for me is worrisomely impressive because as a you lad, I idolized Richard Burton as an actor. I don't think I really want to him as person. This act kind of spoiled it by being so good. 🤭

Beautifully written and acted. I highly recommend for anyone who loves theatre and history! Bravo!!

Exquisite. A must listen to! The man playing Burton has him down pat. I’m amazed that I felt so many emotions in such a short time. Kudos to Audible for this amazing piece of art!

Should be a six-star option

Reminds me of that time when even drunks might have class. The language, the weaving of conversation with literature, the voice. That voice, almost like he was back with us for a moment. Bravo.

Blown away. Magnificent beyond my expectations.

Knowing of the career of the great Richard Burton is one thing, to allow yourself to be completely immersed, enthralled, and smitten with every word, every inflection, every moment of this brilliant piece is a true, delicious delight. The acting sublimely superb, the writing, again fabulous. One of my favorites so far, utterly entertaining.

Liked it a lot - jives quite well with the impression of Burton’s life that I got from reading his published diaries.

Rhys’ natural South Walian accent serves the piece well - his timbre sounds a little higher and he does speak a bit more quickly than how I “hear” Burton’s voice in my head. Luckily, I discovered that choosing to have it play back at 0.9 or 0.8 speed deepens the tone, slows things down to a speed that better suits my own notions of Burton’s meter, and as a bonus, doing so also conveniently imparted the impression of the slightly inebriated slur that so many full-time drinkers develop.

great acting. one of the best books I've ever listened to can't recommend it enough

What a command of the English language

So we’ll written, so incredibly well read. I actually applauded at the end !!!! BRAVO!!!! This is my first review in many many years of being an Audible member. I just couldn’t contain my appreciation. Thank you Matthew Rhys you are pretty amazing!

Brilliant performance. Excellent sound design. I didn't have much interest in Richard Burton but this made me fall in love. Surprisingly hilarious at times. An absolute pleasure.