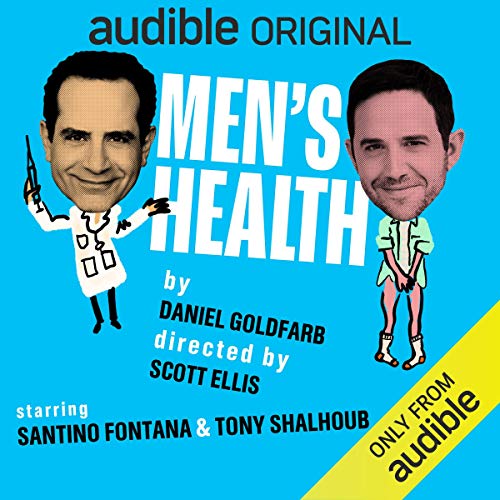 A visit to the urologist has never been more hilarious - or revealing - than in Men’s Health, a new comedy written by Daniel Goldfarb and directed by Scott Ellis. Adam (Tony® winner Santino Fontana) is a TV writer in search of a diagnosis for a very personal problem. He ends up half naked and fully freaked out in the exam room of Dr. Szabo (Tony and Emmy® winner Tony Shalhoub), a physician with a unique bedside manner offering some truly unorthodox treatment options. After several months of appointments, both patient and doctor begin to open up, sharing some of the most private parts of their lives. But when Adam decides to write about their relationship, Dr. Szabo discovers how frightening and freeing it feels to be truly exposed.

Portions of this audiobook contain mature language and themes. Listener discretion is advised.

Daniel Goldfarb made his Broadway debut with Martin Short: Fame Becomes Me. His plays include Legacy (Williamstown Theatre Festival), Cradle and All and Sarah, Sarah (Manhattan Theatre Club), The Retributionists (Playwrights Horizons), Modern Orthodox (Dodger Stages), and Adam Baium and the Jew Movie (Blue Light), which won the Oppenheimer Award for best New York debut. His television work includes three seasons as a writer/producer on Amazon’s Emmy-winning The Marvelous Mrs. Maisel, for which he won a WGA Award and was nominated for Emmy and PGA Awards. He is the creator of HBO Max’s Julia starring Sarah Lancashire and David Hyde Pierce as Julia and Paul Child.

Tony Shalhoub is a Tony Award, Golden Globe Award, and Emmy Award-winning actor with a diverse and extensive resume.
On the Broadway stage, Shalhoub starred in David Cromer’s The Band’s Visit at The Ethel Barrymore Theater, winning a Tony for Best Performance by a Leading Actor in a Musical. Prior to that, Shalhoub starred in Terry Kinney’s revival of Arthur Miller’s The Price opposite Mark Ruffalo and Danny DeVito. Shalhoub’s other theater work includes starring in the Broadway productions of Act One, Golden Boy, and Conversation With My Father, receiving Tony Award nominations for each performance. Shalhoub also appeared opposite Diane Lane in Lincoln Center’s Off-Broadway production of The Mystery of Love & Sex.
Tony Shalhoub is perhaps best known for his work as the obsessive-compulsive detective Adrian Monk in the hit television series Monk for which he won a Golden Globe Award, three Primetime Emmy Awards, and two SAG Awards for his work on the show.
Shalhoub can now be seen on the third season of the Amazon series The Marvelous Mrs. Maisel, for which he has previously won the Emmy for Best Supporting Actor in a Comedy Series. Additional television credits include Braindead, Nurse Jackie, Too Big to Fail, and Wings.
Shalhoub’s film credits include Stanley Tucci’s Final Portrait with Geoffrey Rush and Armie Hammer, The Assignment, Pain & Gain, Men in Black I and II, Galaxy Quest, The Seige, The Man Who Wasn’t There, and Big Night, as well as voicing the character of Luigi in the Cars franchise.

Santino Fontana has cemented himself as one of Broadway’s most versatile actors as well as a formidable screen talent. In 2019 Fontana won the Tony, Drama Desk, and Outer Critics Circle Awards for Best Actor in a Musical for his groundbreaking dual-role performance in Tootsie. He is one of the few performers to have received the Obie, Lortel, Clarence Derwent, Outer Critics Circle, two Drama Desks, and the Tony in a mix of straight plays and musicals.
On film he is known for voicing the villainous Prince Hans in Disney’s Academy Award-winning animated feature Frozen. He was also seen in Universal Studios’s Sisters opposite Tina Fey and Amy Poehler. His independent film work includes the romantic comedy Off the Menu, the psychological thriller Impossible Monsters, and the comedy Papercop, for which he won a Best Actor Award at the Williamsburg International Independent Film Festival.
On television, Fontana has been seen on Crazy Ex-Girlfriend, Shades of Blue, Fosse/Verdon, The Good Wife, Nurse Jackie, Brain Dead, Mozart in the Jungle, and Royal Pains. He can also be seen in the popular web series Submissions Only. He is also a celebrated audiobook narrator with numerous credits, receiving the Audie award for Stephen King’s The Institute.

Diane Guerrero is a series regular on DC Universe/HBO Max’s series Doom Patrol. She plays Crazy Jane, the most powerful member of the show’s titular band of outcast superheroes. An unlikely and unstable hero, Crazy Jane suffers from the world’s most severe case of multiple personality disorder, and each of her 64 distinct personas comes with a different superpower.
She is also known for her roles as Sofia, a series regular on the CBS comedy Superior Donuts, Maritza Ramos on the award winning, Emmy and Golden Globe-nominated Netflix series Orange Is the New Black (for which she received three Screen Actors Guild awards), and Lina in CW's break-out hit Jane the Virgin.
She was also nominated for the 34th Imagen Awards and is the winner of the Lupe Ontiveros Indomitable Spirit Award by the National Hispanic Media Coalition, and Variety named her one of the top 10 Latina actresses to watch.

Tom Hollander’s career has spanned leading roles in film, TV, theater, and radio productions in addition to writing and producing. He was most recently seen in the BBC drama Us, written by David Nicholls and co-produced by Hollander’s own Bandstand Productions. Film roles include the third installment of Matthew Vaughn’s Kingsman, Gosford Park, In The Loop, Pride & Prejudice, Birdbox, and Bohemian Rhapsody. For TV, he co-created, produced, and starred in the BAFTA Award-winning BBC comedy Rev. and won the Best Supporting Actor BAFTA for his role in The Night Manager. He was cast in The Ipress Files for ITV and has appeared in a wide variety of TV roles from King George V in The Lost Prince to Guy Burgess in The Cambridge Spies. In 2015 he won the RTS Award for Best Actor for his role as Dylan Thomas in A Poet In New York for BBC Two.
ORIGINALS

What listeners say about Men's Health

Tony Shalhoub's hilarious! I enjoyed every minute of listening to the dramatization. The dialogue is superb.

Both main characters are amazingly rendered, the story is wonderfully novel and uncongruous, but its main characteristic is how incredibly funny it is, I laughed and rolled my eyes and shook my head all along! Much too short, but it will be a renewed pleasure to listen to it again a couple years, once I've forgotten some of it!!

Perfect performance by Tony Shalhoub, I felt like watching a play.
The book is of perfect length. It follws an urology patients visits to the doctor, with our view at his life told through these sessions. The humorous doctor makes the patient open up and evolve through their sometimes absurd and sometimes deep conversations, climaxing, after some ups and downs, in a personal bond of friendship.

Enjoyed hearing the male side of embarrassing Dr visits! I very much enjoy Tony Shalhoub!

So funny!!! Tony Shalloub is fantastic on this! Santino Fontana also is great. very well done!

Funny and a delightful change of pace!

A wonderful and refreshingly different story chock full of laughs and giggles.

The story was set in an environment I’ve rarely seen in a comedy, but oh, does it ever work. It creates the frame work for the excellent performances. Tony Shalhoub’s performance was a treasure (and not only because he had some of he funniest lines).

I laughed and even winced in sympathy. Amazing story and performances. 4 more words needed.

I Really Didn’t Appreciate It

I’m not sure what the point of this was? I really have great respect for the talent of Tony Shalhoub, Santino Fontana and Laura Benanti- they are all consummate Broadway veteran performers- but this was a disaster with respect to the content

Love Tony Shalhoub, which is why I found this book. It was a funny story, and the performances of Shalhoub and Fontana made you feel like you were right there watching it all happen.

Very intriguing... wonder if the television show came to fruition? What a strange way to find out about yourself. But sometimes it takes someone so far removed to show you a glimpse of who you are.