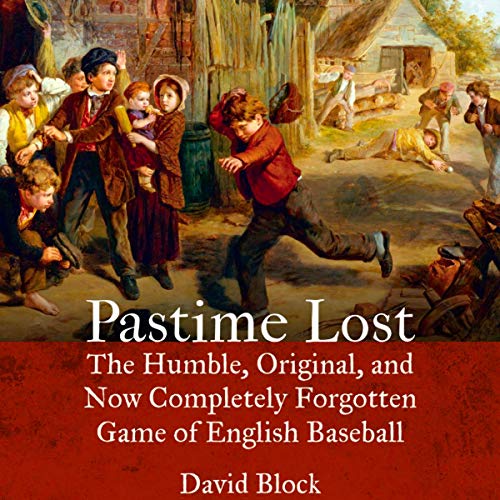 By: David Block
Narrated by: Michael Hanko
Try for $0.00

Long before baseball became America’s national pastime, English citizens of all ages, genders, and classes of society were playing a game called baseball. It had the same basic elements as modern American baseball, such as pitching and striking the ball, running bases, and fielding, but was played with a soft ball on a smaller playing field and, instead of a bat, the ball was typically struck by the palm of the hand. There is no doubt, however, that this simpler English version of baseball was the original form of the pastime and was the immediate forerunner of its better-known American offspring. Strictly a social game, English baseball was played for nearly two hundred years before fading away at the beginning of the twentieth century. Despite its longevity and its important role in baseball’s evolution, however, today it has been completely forgotten.

In Pastime Lost David Block unearths baseball’s buried history and brings it back to life, illustrating how English baseball was embraced by all sectors of English society and exploring some of the personalities, such as Jane Austen and King George III, who played the game in their childhoods. While rigorously documenting his sources, Block also brings a light touch to his story, inviting us to follow him on some of the adventures that led to his most important discoveries.

"Will entertain and enlighten baseball aficionados and any who are fascinated by bat and ball games." (Choice)

"Makes for an excellent combination of information and entertainment that is sure to please any reader." (Lance Smith, Guy Who Reviews Sports Books)

What listeners say about Pastime Lost

It's such a shame that such a rare book on this topic was ruined by constant mis-pronunciation of English place names. It might be forgivable if it was an otherwise American-based book with occasional references to oddly-spelt foreign towns (although I like to think a professional would still get it right) but the whole thing is based in England from what I've heard, and the town of Basingstoke (pronounced Bazzingstoke!) has been mentioned over a dozen times!

I'm paying for this, and, I assume, the narrator has been paid to read the book. Surely it's narration 101 to check these things. It's the equivalent of a book publisher producing books with countless mis-spellings.

I've tried to overlook it but it drives me nuts so I've given up.