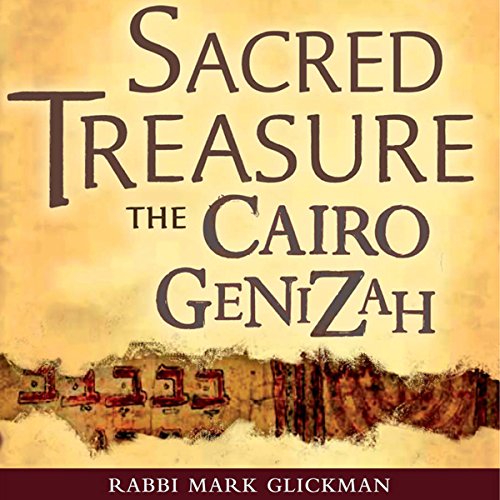 Indiana Jones meets The Da Vinci Code in an old Egyptian synagogue - the amazing story of one of the most important discoveries in modern religious scholarship.

In 1897, Rabbi Solomon Schechter of Cambridge University stepped into the attic of the Ben Ezra Synagogue in Cairo, Egypt, and there found the largest treasure trove of medieval and early manuscripts ever discovered. He had entered the synagogue's genizah - its repository for damaged and destroyed Jewish texts - which held nearly 300,000 individual documents, many of which were over 1,000 years old.

Considered among the most important discoveries in modern religious history, its contents contained early copies of some of the Dead Sea Scrolls, early manuscripts of the Bible, and other sacred literature. The importance of the Genizah's contents rivals that of the Rosetta Stone, and by virtue of its sheer mass alone, it will continue to command our attention indefinitely.

Sacred Treasure - The Cairo Genizah is the first accessible, comprehensive account of this astounding treasure trove of documents and their discovery. It will delight listeners with its fascinating adventure story of why this enormous collection was amassed, how it was discovered, and the many lessons to be found in its contents. And it will inform listeners of how Schechter's find, though still being "unpacked" today, has forever transformed our knowledge of the Jewish past, Muslim history, and much more.

"Glickman brings the colorful story up to date with information about the post-Schechter work, the dispersal of the genizah’s collection to other libraries around the world, and the efforts to preserve and digitize the documents so that scholars everywhere can use them. Anyone who loves books and history will relish this." ( Booklist)

What listeners say about Sacred Treasure - The Cairo Genizah

Not what I thought it would be, but worth it

I thought that it would be a book about the contents of the documents found in the Cairo Genizah. It actually is the story of how the documents themselves were found and the in-fighting about how they were handled, bought and sold, and found their way to all parts of the world. There are only a few excerpts from the actual documents, but they are mighty interesting.

More than dusting of a few old documents

During a third year Hebrew class on the Dead Sea Scrolls I took note that the Damascus Document came from a genizah (a room in a Jewish synagogue where mainly worn scrolls and other writings are held) in Cairo. It was a cursory meeting with the Cairo Genizah of the Ben Ezra synagogue.

At long last, a book that brings the story of the discovery of this genizah and its treasure to the general listener/ reader! As far as I know this is the only popular academical book on this subject.

Rabbi Glickman does an excellent job of pulling the reader into the story. He gives an overview from its time of discovery in the 1890's (or... perhaps a few centuries earlier) to the current state of the genizah scholarship. This makes this books indispensable for both Jews, Christians and Muslims (not only Jews and Muslims, as the rabbi sometimes seem to imply.)

When it comes to the reading of the text, Rabbi Glickman's warm voice definitely more than suffices in bringing the intrigues around this discovery to life. However, it seems that he sometimes want to stop at a few awkward places in his sentences. I couldn't decide if he was trying to read to quick and them ran out of breath or if he had overcome a speech impediment. Yet it doesn't take away his warm-hearted invitation to the Cairo Genizah.

In summary, this book about the discovery and implication of the Cairo Genizah is long overdue. Rabbi Mark Glickman masterly immerse you in almost the next best discovery to the Dead Sea Scrolls.

Excellent story about a very interesting topic. I planned to stretch my listening out over a couple of weeks, but I couldn't manage to break away so I ended up finishing in a couple of days! The author/narrator offers us a beautiful portrait of the fascinating figures that discovered and explored the Cairo Genizah. Wrapping the subject material into his and his son's interest in the Genizah made it both personable and endearing.

Would you listen to Sacred Treasure - The Cairo Genizah again? Why?

yes! the story is amazing. repeat will let me understand the story better.

Soloman Schector, his personality and extraordinary work he did in Cairo Genizah research.

Have you listened to any of Mark Glickman’s other performances before? How does this one compare?

No, he did a wonderful job.

the author and his son visiting Cambridge library and entering the manuscript room. I felt my heart beating hard and fast.

WOW. I loved the book. Could not stop listening. Amazing piece of Jewish History. Obe of the best choices of the last year.

Great backstory and summation of a fascinating, but complex, Academic topic!

I was interested in this topic from an academic perspective, but Glickman makes the backstory and basic academic analysis exciting for the curious general reader.

Buried Treasure in the Attic

I highly recommend this to anyone fascinated by the finds of antiquity. In a sense it is like finding a new cave at Qumran. However, the book only hints at the totality of what was found in the "attic" in Cairo. For scholars who read Hebrew and Arabic, entering the libraries (or, since the collections are being digitized, opening their browsers) which house these finds must be like entering a candy store.

The genizah was "discovered" by western scholars in the 1890s. The documents housed in the attic were thought to be in the thousands and turned out to be in the 100s of thousands, and dated back to the middle ages. Stop reading this quasi-review and read the book. It is well worth the time.

As Constantijn Huygens wrote to René Descartes " it takes the same amount of time to read the work of fools and it does to read what matters" (paraphrase).

Although this is actually a history book, it reads like a mystery. It unlocks a huge piece of Jewish history I had no idea about. It also reveals a very different relationship between Jews & Muslim in the past, that is especially intersting in light of the constant conflict in the middle these days. I recommend it to anyone interested in the history of Judaism but also of the middle east.

Clear, easy to listen to & wonderful pronunciation of all the many names & places. He made what might have been hard to read easy to follow. I wish he had spoken a little slower. With such complex information it somestimes needs a little more time to grasp evey bit of information.

This audible book was excellent bringing to life this amazing story. The way it was read made the people come to life and I wanted to meet them as well as reading what they had found.
I will certainly re-listen to it as I know that I will get more from the story next time.

Where does Sacred Treasure - The Cairo Genizah rank among all the audiobooks you’ve listened to so far?

Very interesting. I was enthralled by the Discovery of the Documents and the translations involved

What was one of the most memorable moments of Sacred Treasure - The Cairo Genizah?

The story leading up to the actual Discovery of the Treasure in the Cairo Genizah.

The translation of many of the documents found, plus learning about early Jewish History

To learn about the friendship and tolerance of the Muslims and the Jews at that time.

Much detailed research went into this book. Many of these details provide credence to this discovery. The Narrator is superb and to be recommended

An excellent book on a topic so far from my experience that entranced me and made me aware of the debt we owe to scholarship and study.
The detail and description of challenge, understanding of the potential and the input of so many well intentioned people was a joy to behold.
My very best regards and thanks to the author for this book.

I love books on Judaism and had been desperate to read this book. I purchased it in paperback but became very ill so was unable to read. I was delighted to see it was on audible.

The narrator used a monotone constantly and I don't know if I even got past the first chapter. I won't be listening to any more. I just hope the paper version is better