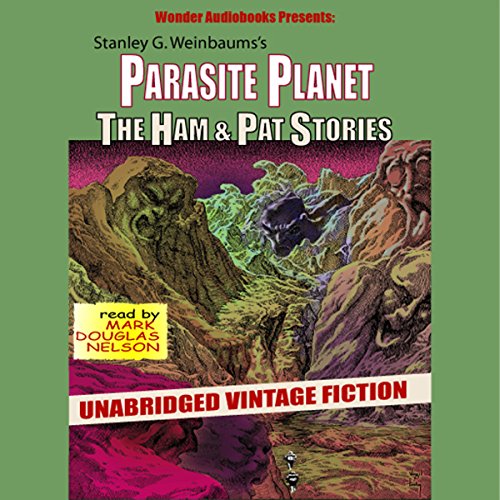 The short and meteoric career of Stanley G. Weinbaum produced many instantly hailed classics. None had the breadth of wonder, and adventure with philosophic insight as the trilogy of stories that feature Ham Hammond and Patricia Burlingame.

Parasite Planet begins with Ham Hammond trekking across the surface of Venus. The environment is parasitic, filled with bizarre alien life forms like the lasso throwing Jack Ketch Trees and the doughpots, a mindless omnivorous ball of animate cells that devour all living things in their path. When Ham meets the contentious Patricia Burlingame, they have to march across Venus to safety. It's not clear what is going to kill them first, Venus's hostile environment or each other.

In The Lotus Eaters, Ham and Pat are on a special scientific expedition to the dark-side of Venus. They discover a strange warm-blooded plant. The most disconcerting thing about the plant is when it begins speaking English and waxing philosophically.

The Planet of Doubt brings the duo to Uranus on another special scientific expedition. The cloudy shrouded terrain strikes terror into the heart of Ham as tries to find the lost Pat who he hopes is still be alive!

"The Parasite Planet hit with the force of a pile driver and turned me instantly into a Weinbaum idolator." (Isaac Asimov)
"He was a central precursor of the Golden Age of SF." (The Encyclodedia of Science Fiction)

What listeners say about Parasite Planet

This is a delightful series of short stories by an oft overlooked pioneer of science fiction. Sadly, his career was short lived and we have precious little of his work to enjoy. In these stories, as in his masterpiece "A Martian Odyssey" Weinbaum introduces us to aliens whose logic and thinking is truly alien to our own. The protagonists are both enjoyable and the setting is an interesting glance back on what scientists at that time believed that life on Venus might resemble. Highly recommended.